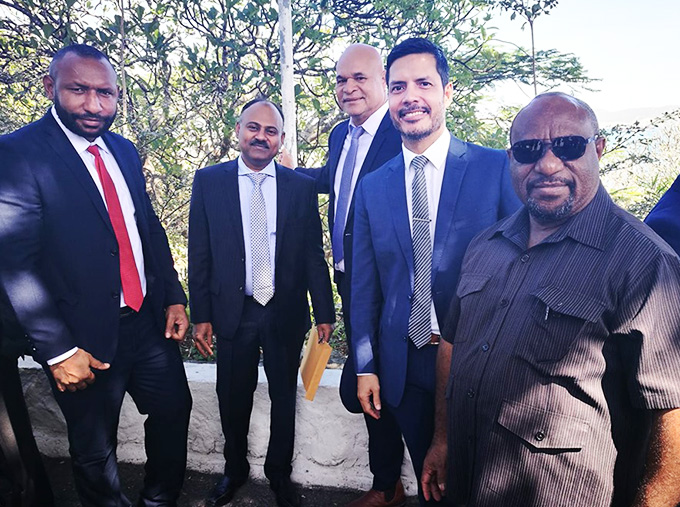 Papua New Guinea’s new Prime Minister James Marape has overseen a shake-up of cabinet which he says will drive reform the country needs.

The new National Executive Council, announced by Marape this afternoon in Port Moresby, includes two leading members of the opposition in recent years.

The Madang MP Bryan Kramer, an outspoken government critic with a massive following on Facebook, has been appointed Police Minister.

Sinasina-Yongamugl MP Kerenga Kua, another trenchant critic of the former Peter O’Neill-led government, has been appointed Minister for Petroleum and Energy.

In both cases, an MP who has pushed for reform in a key sector now has the opportunity to implement changes in that area.

Marape’s announcement of Kramer’s appointment was met with cheers at Government House.

“He’s the first to admit that police operate in the rule of evidence and the rule of law,” Marape said.

Police heirarchy
“So we will be asking of him, in the first instance, to restore credibility in the entire police hierarchy. It’s not only about the commissioner or a few sections of the police. The entire police structure is dysfunctional at the moment.”

Marape, who has underlined that his government will review laws governing resource sectors, said he looked forward to working with Kua in the vital petroleum sector to ensure the country has an adequate share of the benefits.

“Of course, he comes from the other side of the house. And he did not cast a vote for me [as prime minister],” Marape explained.

“But this is not about me, this is about the right thing for the country, taking the best men we have around.”

Marape and Kua have both opposed the O’Neill government’s move in April to sign an agreement with French petroleum company Total for the US$13 billion Papua LNG gas project in Gulf province.

They cited concerns that landowner interests were being undermined in the deal, and that the O’Neill government had rushed the deal through without meeting mandatory requirements.

Triggered defections
Meanwhile, the Esa’ala MP Davis Steven has been appointed PNG’s Deputy Prime Minister. He and Marape were the first senior ministers to resign from the O’Neill government in April, triggering a series of defections which ultimately forced the former prime minister to resign.

Other notable cabinet appointments were Bulolo MP Sam Basil as the Treasurer, and O’Neill’s former deputy Charles Abel, the Alotau MP, as the Finance Minister.

Abau MP Sir Puka Temu has been given the portfolio of Bougainville Affairs, which is of critical importance given the Bougainville independence referendum is to be held in October.

Kikori Open MP Soroi Eoe is the new Minister for Foreign Affairs and Trade, replacing Rimbink Pato who had been in the role since 2012.

Marape paid tribute to Pato’s work during his long stint in the role, but explained that there was no room for the Wapenamanda MP given the need to balance regional interests in the cabinet.

“I can’t afford to have more Engans in cabinet with me,” Marape said.

Cabinet split
The prime minister has also made a major change to the shape of cabinet by dividing it in two, which is an attempt at bringing reform with more inter-ministry cohesion than has been seen in the past.

One division will be in charge of the social sector, Marape explained. This will be led by the deputy prime minister and will cover sectors such as Health, Education, Police and Justice

The other area, which the prime minister himself will lead, is concerned with the economic sector, and will include Treasury, Finance and National Planning.

Notably, the National Alliance, which has led PNG’s opposition in the past two years, has not been given any portfolios, despite voting for Marape as prime minister. This seems to confirm that they will be the core of the opposition in the foreseeable future.

While there has been an injection of fresh talent into the National Executive Council, around half of the ministers who were also part of O’Neill’s cabinet, leaving a question mark over the prospects of true reform.