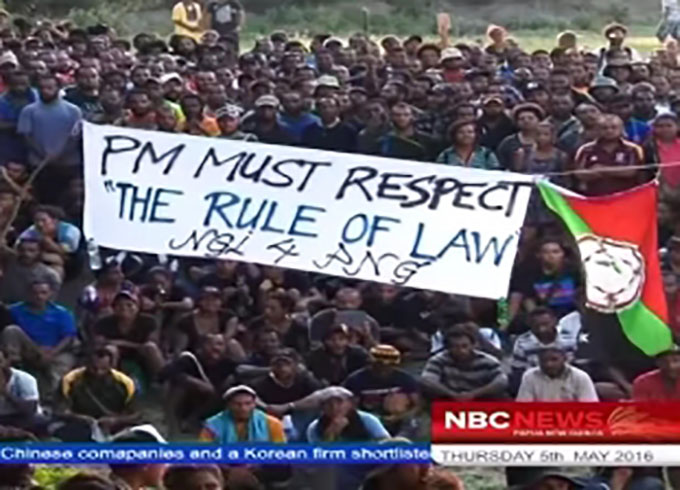 You sold all our todays and were about to sell our children’s tomorrows too. You were in the most enviable and powerful position to do what is right and just by the people of Papua New Guinea – my people.

But instead you and a few chosen vultures and pirates and similar characters who you call “friends” chose to exploit our people and destroy our people’s future. All for profit and all for greed.

You and these despicable and greedy selfish raiders and plunderers will not package pieces of our homeland and sell it to benefit yourselves only.

They are rising up to fight. That’s what we do when our homes and children are threatened by war. Your war. A war to take all that is ours and sell it to your friends and cronies.

Now I asked myself often why? Why would a Papua New Guinean destroy his own people? It is as if you don’t care about this country and are not from it.

I believe the answer to that is emerging soon enough. This question and all the questions rising from this need answers still.

Land is our life. It will not be sold.

We are taking back what is ours – and our children’s, our beloved Papua New Guinea.

You made a mistake. You arrogantly thought that the leaders supporting you would remain silent and continue to do so.

But you forgot one fundamental fact.

Not blinded by greed
They are Papua New Guineans. Not all would be blinded by your greed and agree to all your madness.

That’s not why they were elected. To follow and obey the destruction of this great nation at your will and whim for the benefit of your evil plundering and marauding pirate friends!

They are not all blind and deaf and ignorant as you have so arrogantly assumed. Many were disturbed and unable to sleep at night.

The cries of their mothers and sisters in our remote rural hamlets could be heard. The bitter protests of our landowners who trusted you and lost all their hopes was too loud.

The crumbling stations and districts and aid posts bereft of medicine and services could not be un-seen. The roads and buildings you built at exorbitant inflated prices with your friends could not be accepted.

Meanwhile, our children sat packed in hot dusty prisons to learn from unpaid teachers, our police had no vehicles and fuel to protect people and property.

The list of all you could have rectified but ignored to do so is grim and dark.

Master conductor
You were instead the master conductor of an evil symphony, with one wave of your hand you diverted our proceeds of resources offshore so you could get more loans that our we and our children and their children would pay off at huge cost for years to come.

With another wave of your hand you allowed a foreign owned company to sell us medecines from a source cited by the World Health Organisation for selling counterfeit drugs. With a deft flick of your wrist you invested in the plundering of our sea bed, and with the other hand you stifled action on addressing the plunder of our forests … and on and on it went.

Your arrogance and ignorance led to this terrible miscalculation that will bring you down. You thought that the elected Papua New Guinean leaders would keep supporting you as you destroyed our country and our people and their children’s future.

But as Papua New Guineans, many of these elected leaders would not stand for it. That is why they have stopped supporting you and started to listen to their peoples cries and are now with their people and not with you.

Signed on behalf of,
People of Papua New Guinea