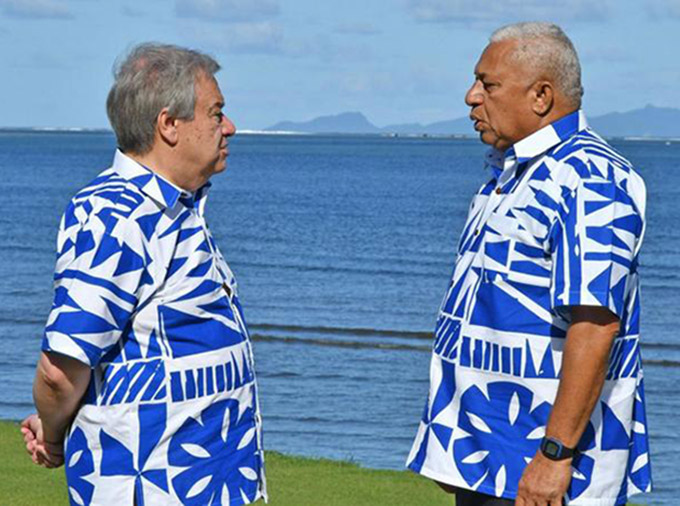 The UN Secretary General António Guterres has praised Fiji as a strong committed partner in peacekeeping and for taking a leading role in the battle against climate change.

Guterres said it needec to be recognised the battle was not being won for the commitments made in Paris to be respected and there needed to be much stronger political will to rescue the planet.

There was nowhere better than the Pacific to feel the moral duty to rally the international community, he said.

“The prime minister was telling me in the meeting we just had, that climate change corresponds to the battle of our lives from the point of view of Fiji and the Pacific.

“As secretary-general of the United Nations, I have many battles but I have no doubt to say that as a grandfather this is also the battle of my life.”

Guterres side-stepped a reporter’s question on whether human rights issues were discussed with the Fijian prime minister, saying Fiji’s progress is being discussed during the Universal Periodic Review process at the UN Human Rights Council.

At a meeting yesterday in Fiji, leaders from countries in the Pacific Islands Forum said climate change was the single greatest threat to their region.

In a statement, the leaders welcomed Guterres to witness the everyday reality of climate change and to drive momentum in the lead up to his Climate Action Summit in September.

“After meeting today, we will return to our island homes. Some of us will find our villages inundated by waves and our homes and public infrastructure wrecked by cyclones. Our coral reefs are dying, our food is disappearing, and we fear for the safety of our loved ones, who are being injured and even killed by some of the most ferocious of cyclones and other extreme weather events ever witnessed in our region,” the statement said.

“Let us together seize the opportunity of the UNSG’s Climate Action Summit to make the changes we need to reverse climate change.”

They said all countries attending the summit must agree to reduce global emissions, and to mitigation and adaption support for countries that needed it.

Without agreement, the leaders said people of the Pacific would continue to lose their homes, their ways of life and their livelihoods.

Message to polluters
“To the major polluters – our today in the Pacific is undoubtedly your tomorrow.

António Guterres acknowledged the message from Pacific leaders, saying he stood with them in calling for climate action.

“The Pacific has a unique moral authority to speak out. It is time for the world to listen,” he said.