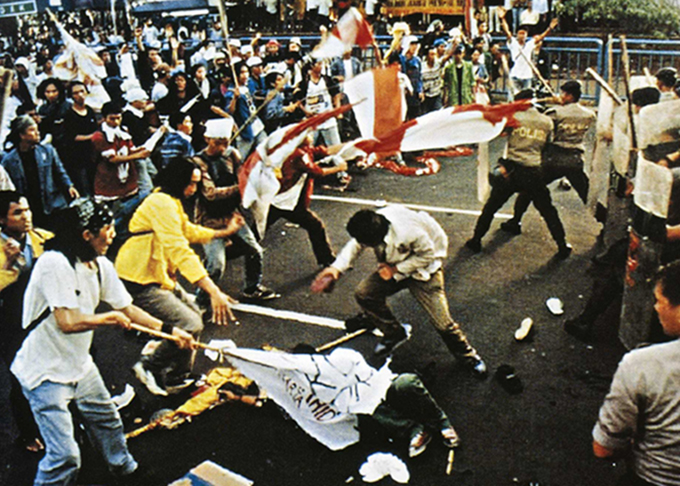 By Devina Halim in Jakarta

Amnesty International Indonesia is calling for justice and truth from the government over the Trisakti student shooting tragedy through legal channels.

This was revealed by AI executive director Usman Hamid in response to the 21st anniversary yesterday of the Trisakti student shootings on May 12, 1998.

On that day, four students were killed when the military fired on a demonstration opposing former President Suharto at the Trisakti University campus in Grogol, West Jakarta.

READ MORE: 21 years on, who is responsible for Trisakti riot killings?

“First, Amnesty is again calling for the state to take responsibility for resolving the tragic student shootings at the universities of Trisakti, Atma Jaya, and at other campuses in Indonesia which took place during the early days of reformasi,” said Hamid.

Hamid said the victims and their families had the right to receive legal justice. This could be achieved by bringing the perpetrators to trial.

In addition to this, the victims also had the right to receive an explanation about the affair and other rights, Hamid said.

Right to justice, truth
“The victims have the right to obtain restoration, as far as is possible, of their lives which were destroyed, through a policy of repression by the state. The right to legal justice, truth and rehabilitation are the most important rights which the state is obliged to fulfill,” he said.

Amnesty is also calling for a resolution of the Trisakti tragedy to be included in the government’s agenda and by incoming members of the next House of Representatives following last month’s general election.

The tragedy reflects the limits on academic freedom and opinion in socio-political terms. Because of this, it is important to remember the tragedy so that the same thing does not happen again.

“The Trisakti tragedy is a tragedy of curbing academic freedom, including independent thinking on campus as well as independence to express views in socio-political life. Commemorating this tragedy is extremely important so that the state and the government do not do this again,” said Hamid.

Meanwhile according to documentation by the Commission for Missing Persons and Victims of Violence (Kontras), about 681 other people were injured across various tertiary education institutions in Indonesia.

The Trisakti tragedy became a symbol and a trigger for student resistance against Suharto’s New Order regime.

Following the tragedy, student protests demanding reformasi (political reform) grew significantly and in the end forced Suharto to resign on May 21, 1998.

Background
On May 12, 1998, security forces fired into a crowd of student protesters from the Trisakti University near their campus in West Jakarta, killing four students and injuring several others.

This proved to be the spark which set-off three days of mass demonstrations and rioting in Jakarta which eventually lead to the overthrow of former president Suharto.

The then armed forces chief and Defence Minister General Wiranto, who is now the Coordinating Minister for Security, Politics and Legal Affairs, has been accused of having command responsibility for the Trisakti and other student shootings in 1998 but has never been investigated over the case.