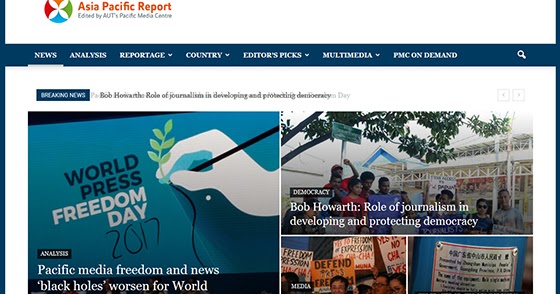 While Pacific countries have got off rather lightly in a major global media freedom report last month with most named countries apparently “improving”, the reality on World Press Freedom Day is that politicians are becoming more intolerant and belligerent towards news media and information “black holes” are growing.

The Pacific is at the milder end on the scale of media freedom violations – there are no assassinations, murders, gaggings, torture and disappearances.

But the global trend of “hatred of journalists [degenerating] into violence, contributing to an increase of fear” warned about by the Paris-based global watchdog Reporters Without Borders is being reflected in our region.

Lack of safety for journalists is a growing concern for media organisations around a world where 80 journalists were killed last year, with 348 being jailed and 60 held hostage.

At least 49 of the slain journalists were “deliberately targeted” because they were media workers.

“If the political debate slides surreptitiously or openly towards a civil war-style atmosphere, in which journalists are treated as scapegoats, then democracy is in great danger,” says RSF secretary-general Christophe Deloire in the introduction to RSF’s annual World Press Freedom Index.

“Halting this cycle of fear and intimidation is a matter of the utmost urgency for all people of good will who value the freedoms acquired in the course of history.”

In Papua New Guinea last week, for instance, amid what appeared to be the unravelling of Prime Minister Peter O’Neill’s coalition government – described by many critics as a “dictatorship” – with the defection of seven members including the finance minister and attorney-general, an opposition leader made an extraordinary threat against the country’s two foreign-owned newspapers.

Vanimo-Green MP Belden Namah, leader of the PNG Party, one of the two major parties in the opposition, put the Australian-owned Post-Courier and Malaysian-owned National newspapers “on notice” that a new government would “deal” to the media.

Angered by the two dailies for not running his news conference stories, he threatened to regulate the print media if a new government is installed in vote of no-confidence due on Tuesday.

Last November, one of Papua New Guinea’s leading journalists, EMTV’s award-winning Lae bureau chief Scott Waide, was suspended by his company under pressure from the O’Neill government to have him sacked.

Why? Because he exposed the “inside story”of a diplomatic Chinese tantrum and a scandal over the purchase of a fleet of luxury Maserati cars during the Asia Pacific Economic Forum (APEC) hosted by Port Moresby.

“Peter O’Neill is acting like another Chinese dictator in Papua New Guinea by exerting control over both state-owned and private media to not report truths and facts that expose his government and their corrupt acts to PNG and the world.”

‘Huge attack’
“This is a huge attack on media freedom in PNG and must be condemned by everyone,” Moses added.

The strong condemnation that followed forced EMTV to reverse its decision and the network reinstated Waide.

Other Pacific countries and Timor-Leste also improved in the report assessing 2018 – except for Samoa, which was unchanged at 21st (just one place behind Australia).

But this improvement must be seen against the background of global deterioration of media freedom.

The qualitative assessments in the index report make it clear media freedom in Pacific countries is also declining, just not as rapidly as in many other countries.

In the North Pacific, a Pacific Island Times magazine editorial last month blasted the traditional chiefs on Yap in the Federated States of Micronesia for demanding the expulsion of a probing US reporter as harassment and an attempt to “silence a journalist”.

The magazine’s editor-in-chief, Mar-Vic Cagurangan, strongly defended her Yap correspondent, Joyce McClure, who has been living on the island for the past three years, saying that declaring her persona non grata would set a “dangerous precedent”.

Joyce McClure’s reporting provided transparency, which was “vital to every democratic society”.

‘Truthful information’
“The Pacific Island Times and Ms McClure have no agenda other than to provide truthful information to the people of the Pacific region. She is doing this job not as an outsider but as a member of the community, which has become home to her,” the Times said in its editorial.

This week, on Wednesday, the Times reported that Joyce McClure “won’t be kicked off the island” as demanded by the chiefs.

“And questions are being raised about the legitimacy of the letter conveying the chiefly demands to the Yap State Legislature and then on to the Federated States of Micronesia Congress,” the Times added.

Replying to questions from Pacific Media Watch, Cagurangan admitted the stakes are high for small and vulnerable “self-funded” independent island publications such as Pacific Island Times.

“During last year’s elections [on Guam], the campaign team of then candidate and Bank of Guam president (now governor) Lou Leon Guerrero signed a political ad contract with us,” she said.

“Despite the signed contract, the campaign team pulled out their ad following the publication of an op-ed piece written by a guest writer, which displeased them.

“Although we rely on advertising revenue to keep going, we refuse to compromise our journalistic integrity and independence.” Malolo environmental expose

In Fiji, an independent New Zealand website, Newsroom, investigated a major environmental development disaster by the Chinese company Freesoul Real Estate on the remote tourism island of Malolo, exposing how Fijian news media had been effectively gagged by 13 years of draconian media legislation and a climate of fear since the 2006 military coup.

Although democracy has returned and two post-coup elections have been held, the most recent last November, journalists are often intimidated into silence.

Opposition Leader Sitiveni Rabuka, the man who staged Fiji’s first two coups in 1987, said the “rot and culture of fear” in the civil service and the “intimidated and cowed media” were now so ingrained in the country that it had taken foreign journalists to break the story.

The three New Zealand Newsroom journalists reporting about Malolo were arrested early last month but Prime Minister Voreqe Bainimarama ordered their release a day later and apologised to them personally for their ordeal at the hands of “rogue officers”.

The intimidation of the Fiji media is an issue that the editor of the award-winning Wansolwara student journalist newspaper, Rosalie Nongebatu, and three of her fellow students addressed at a World Press Freedom Day seminar hosted by the University of the South Pacific on Friday.

As Fiji prepares to vote, democracy could already be the loser