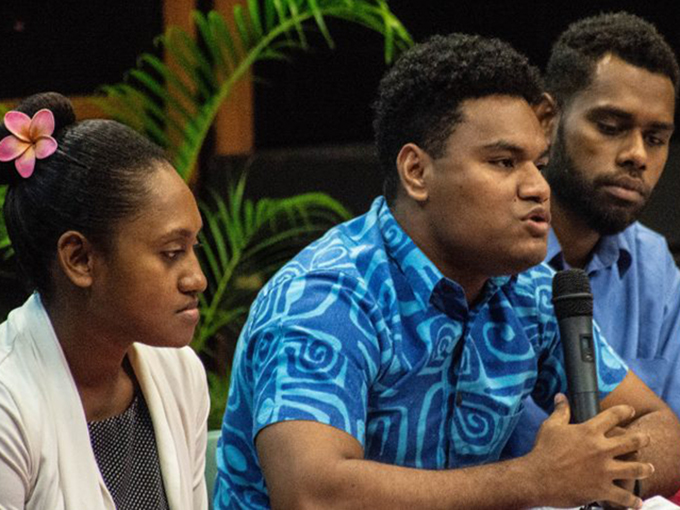 By Wansolwara staff in Suva

Links between quality information, elections and democracy topped discussions among panelists at this year’s World Press Freedom Day celebration hosted by the University of the South Pacific’s journalism programme at Laucala campus in Suva yesterday.

Reflecting on the universal theme, “Media for Democracy: Journalism and Elections in Times of Disinformation”, final-year journalism student Kirisitiana Uluwai said the existence of the media as the Fourth Estate guaranteed the presence of democracy in the country.

“As journalists, we work for the truth no matter how uncomfortable that will make some people feel. We will step on some people’s toes, all in the name of truth.”

Uluwai, who is also the president of the USP Journalism Students Association, said an issue of concern was the increase in fake news on social media.

“Just because we are student journalists doesn’t mean we are zoned out from professional fulltime journalism work in the field,” she said.

‘Real news’
“As student journalists, we cover real news in the real world through Wansolwara and bound by the journalism standard code of ethics.”

“On the same note, the media plays a crucial role in a democracy in promoting development, upholding good governance and holding leaders accountable. In order to report more effectively to ensure citizens are kept informed and equipped to make informed decisions to benefit their lives, the media needs to impart quality information.

“This is a big challenge in many Pacific countries, including the Solomon Islands. In my country, many reporters are young and under trained, thus the reporting is mostly straight news, with little or no analysis.”

In his opening remarks, USP journalism coordinator Dr Shailendra Singh said World Press Freedom Day was an important occasion considering the dire state of the media in the world, including in our Pacific region.

“This year’s theme, “Media for Democracy and Elections”, discusses issues such as rising above emotional content and fake news during elections and strategies to counter speeches demeaning journalists,” he said.

Global trends
“These global trends have ramifications in the Pacific, and affect our journalists too. In reporting elections, journalists should ask, ‘why is this happening?’. Is it merely the people exercising their democratic right, or is there more to it?

“They should also examine and critique the electoral system. This includes questioning the impacts of culture and tradition on elections.”

The Pacific Media Centre and Asia Pacific Report have a publishing partnership with the University of the South Pacific journalism programme.