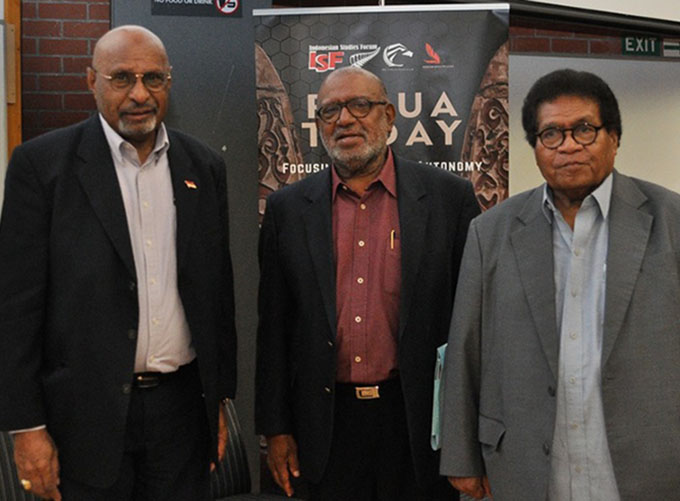 Joku, a former journalist who controversially advocated autonomy for Papua within Indonesia rather than independence, died on Sunday aged 66 after illness linked with heart disease and kidney failure.

He was a prominent landowner from Sentani and formerly the spokesman for the Papua Presidium Council which galvanised momentum in the West Papuan independence struggle at the turn of the century.

But the “Papua Spring” was short-lived, while the Presidium lost ground after Indonesian military special forces assassinated its charismatic leader Theys Eluay.

Although a key supporter of Eluay, Franzalbert Joku eventually threw his support behind the Special Autonomy Status which Indonesia granted to Papua in 2001 in response to the demands for independence.

After fleeing Indonesian rule in his homeland as a younger man, Joku returned for good in 2008.

He became a frequent representative of Indonesia’s government on West Papua matters at regional fora such as the Melanesian Spearhead Group and the Pacific Forum.

Gifted orator
A gifted orator with extensive links in the region, Franzalbert Joku came to the conclusion that independence was not a realistic option, and that Papuans should focus their energies on being part of the Indonesian state.

“Now I say this without meaning to undermine my brothers and sisters who are still out there in the jungle or in other countries advocating outright independence,” he told RNZ Pacific in 2015.

“I just look at the issues and try to place them within the context and try to look at what options are within the realm of possibilities.”

Joku’s shifting of allegiances made him a distrusted figure among many in the West Papuan independence movement.

But when asked last year in his last interview with RNZ Pacific about whether Papua should have independence, Joku said a “deeper look at the issues” was required.

“Independence, for some of us, doesn’t mean an instant action of declaring a sovereign nation,” he said.

‘More a value’
“I think it’s more a value. In order to find that value of freedom, of being independent, it is a continuing process.

“I differ between being an independent, sovereign nation of Papua, than being free and well-off economically, socially within a government structure that is in existence today,” he explained.

“Like in any other political processes, you can never win outright. You always end up with political compromise.”

“Special Autonomy, however imperfect and incomplete it may be, is an acceptable political compromise, and we need to grab hold of it earnestly, and make it serve our interests.”