A Solomon Islands academic says the only body that can find a legitimate solution to his country’s current crisis is the National Parliament.

Senior politics lecturer at the Suva-based University of the South Pacific, Dr Gordon Nanau, said this following the unrest and rioting in Honiara yesterday by a large group of people angry over the outcome of the prime ministerial election in Honiara.

Manasseh Sogavare was voted into power at Parliament House for the fourth time yesterday after polling 34 votes, ahead of rival Matthew Wale whose 14 supporters boycotted the 50-seat Parliament. 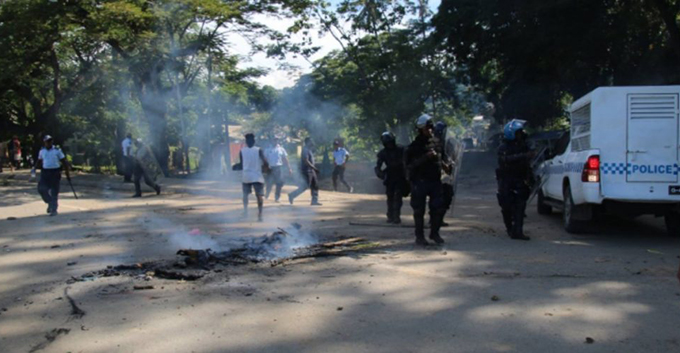 Angry mobs took to the streets yesterday afternoon, looting and causing damage to businesses, vehicles and both private and public properties, in protest against the election of Sogavare.

Videos and photos circulated on social media showed men and women, running, yelling, and throwing rocks at buildings and damaging vehicles in the Eastern part of town. 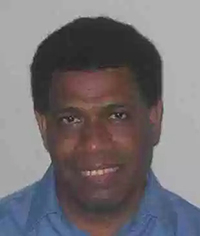 “The only body that can find a legitimate solution to the current situation is the National Parliament of Solomon Islands. If the Prime Minister decides to step down based on his own judgment or that of his colleagues in the House, it will be up to Parliament to determine the candidate with majority support to become prime minister,” Dr Nanau said.

“Again, the process for such a change must be through Parliament. Solomon Islanders must not allow lawlessness and criminal activities to dictate who becomes prime minister.

Convene Parliament
“Parliament must be allowed to convene soon and have a government formed to discuss the current situation.

“This also calls for the 14 MPs who walked out of Parliament to show leadership and allow parliamentary processes to be effected. This is the only way to find a legitimate solution to the current impasse.”

The Pacific Casino Hotel at Kukum, where Sogavare and his Democratic Coalition for Advancement stayed in the lead up to the election, was also looted and damaged by the angry mobs.

The burning and looting continued in the eastern part of the capital last night, which saw the burning of the Oceanic Marine Building at KGVI and the looting and rampage of a recently opened shopping complex.

Reports also suggested that a few innocent people were tear gassed in their own homes as rioters randomly ran into their areas to get away from police.

Sogavare’s win caused an upset as people allegedly saw this as a continuation of the former government and took to the streets to call for a change in the government leadership. The protests after the announcement slowly developed into rioting and unrest, amidst heavy police presence.

USP students call for calm
Solomon Islands students at USP in Suva have called on fellow citizens in Honiara to stay calm and not to take the law into their own hands.

Solomon Islands final-year law student Eddie Babanisi, who is currently based at USP’s Laucala campus, said there were processes in place to address grievances relating to the election outcome.

“I call on the young people to stop what they are doing now. Please stand down and listen to the police and authorities’ call for calm,” he said.

“They have just elected respective leaders into Parliament and they should take this up with their leaders to take up through relevant channels, instead of staging riots.

“Whatever happened yesterday was a parliamentary procedure to choose our leaders and the public has no right over what the National Parliament has decided in electing the new prime minister.”

Bachelor of Commerce final-year student Sophie Kwaomae, who is also from Solomon Islands, said the protests and riots might not be staged just for political reasons.

“The reality is that these young people running around causing havoc don’t have anything better to do but to wait for opportunities to loot and damage the city,” she said.

“Majority of them seem to have horded from squatter settlements into town. The real reasons for this might not be political, but also social, such as unemployment and the poverty stricken conditions they live in every day, thus the motivation to stage such actions to vent their frustration. These are the very issues that the incoming government must prioritise.”

USP campus closes
In light of the unrest by recent political events, USP vice-chancellor Professor Pal Ahluwalia said all USP campuses on Solomon Islands would be closed until further notice.

He said students and staff were urged to remain at home and adhere to security advisories issued by national authorities.

“Our prayers are with you all and the nation at this time, for a peaceful and safe outcome to these events,” he said.

The prime ministerial election continued yesterday morning despite a High Court injunction for the election to be postponed.

The postponement was proposed to make way for the full hearing of the validity of the nomination of Sogavare for prime ministership last Friday.

Talking to the crowd outside the National Parliament soon after his election, Prime Minister Sogavare said they were listening to what people were saying. 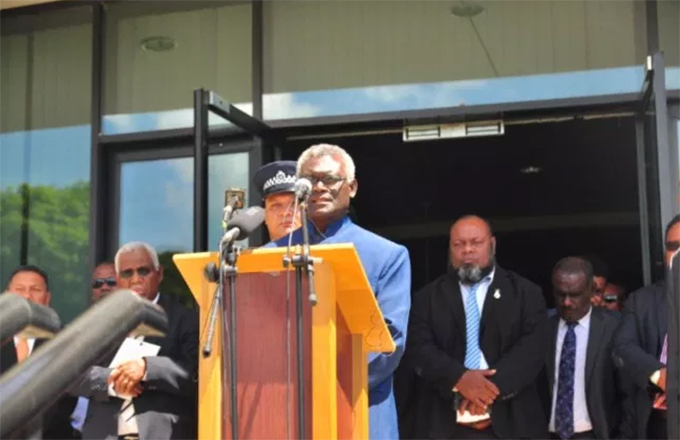 “I want to assure this nation that we are listening to what people are saying. We have heard from various squatters and various groups, who have made very important statements.

“These have not fallen on deaf ears. We will take them into consideration when we work on the government’s new policies.”

‘Rule of law’
In a short video released after the election, Matthew Wale, the Leader of the Grand Coalition whose 15 members abstained from voting yesterday and walked out during election proceedings, said the laws of the country must be upheld.

“The Grand Coalition believes that our legal processes must be respected. We believe that the order and directions of the High Court were reasonable, given the significance of the submissions.

“The walkout, therefore, is for the sake of the rule of law. The Governor-General did not abide by the direction to differ the meeting, a direction of the High Court. No one is above the law including his excellency.”

Rosalie Nongebatu of the Solomon Islands is a final-year journalism student at USP’s Laucala campus. She is also editor of Wansolwara, the USP Journalism Programme’s student training print and online publications. This article is republished as part of USP and the Pacific Media Centre’s journalism education partnership.