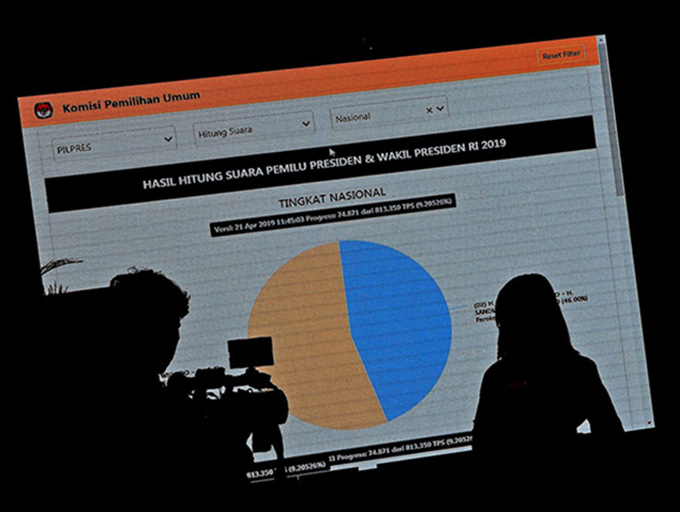 The great wait … A TV cameraman and a reporter work in front of a large screen showing the ongoing results of the 2019 election vote count at the General Elections Commission (KPU) headquarters in Jakarta on Sunday. The vote count is being carried out between April 25 to May 23. Image: Seto Wardhana/The Jakarta Post

As tensions intensified between incumbent Joko “Jokowi” Widodo and challenger Prabowo Subianto over the expected results in the Indonesia election last week, the rival camps scrambled on their own to prove that their respective candidate was the rightful winner of the poll.

The Jokowi-Ma’ruf Amin ticket, which is predicted to win the election as shown by the quick-count results, has even decided to up the ante against Prabowo’s victory claims, as the campaign team publicly opened their own process of final vote counting.

The campaign team also alleged that Prabowo, who had declared himself the new president, citing his own camp’s internal real count, has manipulated the public by not using complete data on the vote counts.

Jokowi’s camp has employed around 250 people working on three different shifts, 24 hours every day to count the C1 vote tally forms from polling stations across the country in a “war room”, located in Gran Melia hotel in South Jakarta.

“We have nothing to hide here and we want everything to be open, so there won’t be doubts or scepticism anymore […] our mechanism and standards for the real count are also accountable,” Moeldoko said on Sunday.

Similar to the real count by the General Elections Commission (KPU), the team working in the facility counts votes based on a digitised version of the C1 forms, which record the final vote count of each polling station at the district level, from hundreds of thousands of polling booths across Indonesia.

Real time data
The witnesses at all polling stations sent the photo of C1 forms to the team, established under the Witness Directorate of the campaign team, which would input the data in real time. The coordinator of witnesses in each district was responsible for overseeing and clarifying the data sent by the witnesses.

The data so far showed that Jokowi-Ma’ruf lead with 56.16 percent against Prabowo-Sandiaga’s 45.84 percent.

Early vote counts conducted by a number of pollsters, including the Centre for Strategic and International Studies (CSIS) and Cyrus Network as well as Saiful Mujani Research and Consulting (SMRC) showed the Jokowi-Ma’ruf Amin ticket had 54 to 56 percent of the vote against Prabowo-Sandiaga Uno’s 44 to 46 percent.

In a controversial move, the former Army general declared his victory hours after the election and said the camp’s internal real count showed that he had won the race with 62 percent of the vote from over 320,000 polling stations across the country.

Witness Directorate deputy director Lukman Edy, however, said the team had found that Prabowo’s claim was not supported by reliable data and in the revealed cases, the rival camp did not put the results from all polling stations in the province into the equation.

“[Prabowo’s camp] put our votes at 40.91 percent while they won with 59.09 percent [in Lampung]. After we looked into it, turns out they only used data from 30 polling stations,” Lukman said.

A similar situation happened in Jakarta, with Prabowo’s campaign team declaring victory in the province by only counting 300 out of thousands of polling stations, he said.

Prabowo-Sandiaga Uno campaign team spokesperson Dahnil Anzar Simanjuntak said the team did not think too much about the analysis done by Jokowi’s camp, and said they would keep focusing on monitoring the real count. The KPU is expected to announce the final results on May 22.

Meanwhile, in what could be seen as an attempt to diffuse tensions, Jokowi has appointed Luhut Panjaitan — a retired Army general — as his envoy to engage in talks with the Gerindra Party patron.

According to Luhut, he and Prabowo had talked on the phone, describing their conversation as “full of laughter” with “a little bit of nostalgia”.

“Pak Prabowo is a good man […] I know him as a very rational man who can think clearly,” Luhut told journalists on Monday, “So I just want to suggest that he does not listen too much to those whose ideas are somewhat baseless.

“I truly want Pak Prabowo to leave behind a legacy as a leader who participates in strengthening democracy in Indonesia and respects any decision by the KPU,” Luhut said.

View from The Hill: Coal push from Nationals is a challenge for Scott Morrison