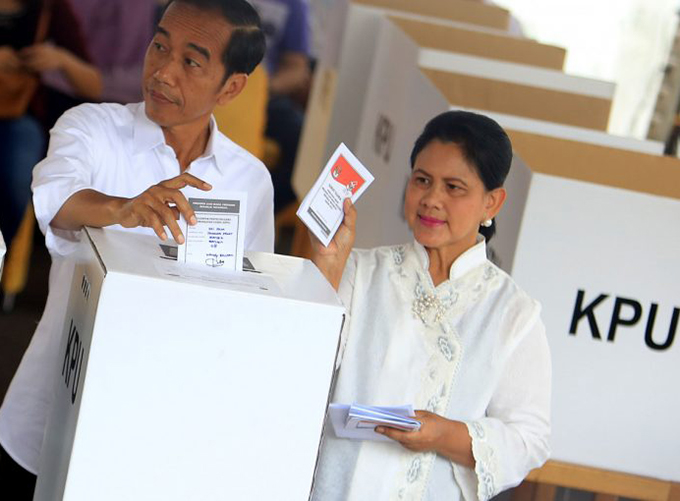 By Karina M. Tehusijarana in Jakarta

A quick count conducted by the Centre for Strategic and International Studies and Cyrus Network indicates that President Joko “Jokowi” Widodo has been reelected to the presidency in Indonesia, with the Jokowi-Ma’ruf Amin ticket winning 55.8 percent of the vote against Prabowo Subianto-Sandiaga Uno’s 44.2 percent.

“Today we can conclude that Pak Jokowi and Pak Ma’ruf Amin is ahead of Prabowo Subianto-Sandiaga Uno based on our quick count results,” CSIS executive director Philips Vermonte said.

“The position will not change.”

READ MORE: A thousand Indonesias at stake in one election

Prabowo claimed victory hours before quick-count surveys officially ended, in a repeat of a similar declaration he made in the 2014 presidential race – which he lost.

He claimed a “real count” from more than 320 polling stations had placed him in the lead with 62 percent of votes.

He added that he had consulted statistics experts who said the figure would “not differ much” from the final count.

Melanesian leaders of the two easternmost provinces of Papua and West Papua had called for a boycott of the election and demanded independence.

For the quick count, the pollsters surveyed 2002 polling stations across the country’s 34 provinces.

As at 5:03 pm last evening, local time, data from 86.7 percent of the polling stations surveyed had been received. The margin of error from the quick count is 1 percent.

The results were in line with the most recent polls, which showed Jokowi holding a comfortable double-digit lead over the Gerindra Party chairman.