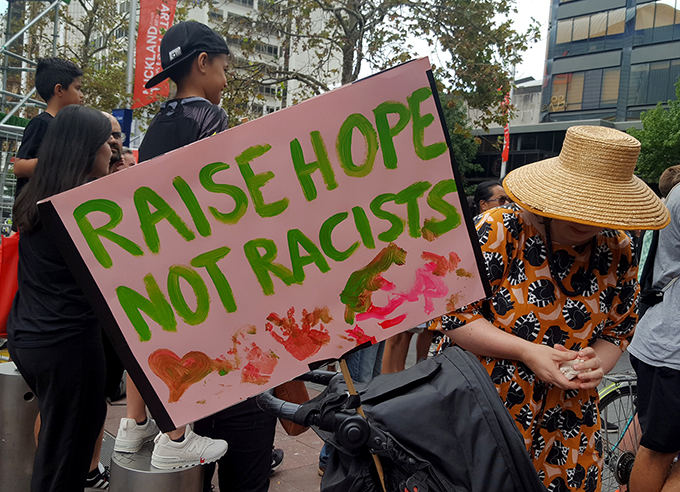 By Ben Strang of RNZ News

Thousands of New Zealanders do not believe the official version of the mosque terror attacks in Christchurch.

About 5 percent of the people are estimated to be hard core conspiracy theorists, some of whom have been spreading their theories online and over the airwaves, reaching a global audience, according to Victoria University professor of psychology Marc Wilson.

Professor Wilson, who has studied conspiracy theories, said it was no surprise that New Zealanders had been looking for alternative explanations for the Christchurch attacks.

For years he has argued the Sandy Hook school shooting in the United States was staged by actors to undermine gun ownership rights.

Families of the 20 children killed are suing him for defamation, and this week, in a court deposition, he finally conceded the attack was real and children died.

One of the people to talk to Jones was Sharee, a North Island woman who said there was a link between the recent measles outbreak in Christchurch and the terror attack.

No animosity
Sharee went on to say the attack didn’t make sense, because there was no animosity towards New Zealand’s Muslim community.

She said the United Nations orchestrated the attack, and she was disgusted by the government’s response.

Thousands of other New Zealanders are active on Facebook and other social media sites, discussing different theories for what happened in Christchurch.

“What I’ve found is that something like 30 percent of New Zealanders argue that, for example, the bombing of the Rainbow Warrior was not conducted by agents of a foreign power.

‘Established fact’
“I find it kind of interesting, because I’m pretty sure it was the French actually. I mean, that’s a fairly well established fact.

“About a third of New Zealanders indicate that they think the All Blacks were poisoned before the 1995 World Cup final.”

Professor Wilson said the internet had fostered a dramatic increase in the number of conspiracy theories.

The flash point was 9/11, and now there are millions of people browsing websites which only strengthen their beliefs.

He cited confirmation bias, in which people surround themselves with online communities who shared the same views, and reinforced their beliefs.

Professor Wilson said conspiracy theorists seized upon any opportunity to question the official narrative, like the fact police charged the alleged gunman with killing someone who was still alive.

“Finding that police have identified someone as dead, who actually isn’t dead, then becomes the kind of information that someone who already has a predisposition to distrust the official point of view, then confirms that belief.”

‘Fake news’ phenomenon
Professor Wilson said one of the most mainstream conspiracies was the fake news phenomenon, which was spread most famously by supporters of United States President Donald Trump.

The president has also appeared on programmes like Jones’ Infowars.

Professor Wilson said it was a relief New Zealand politicians had not gone down the American route, but it was something he watched closely.