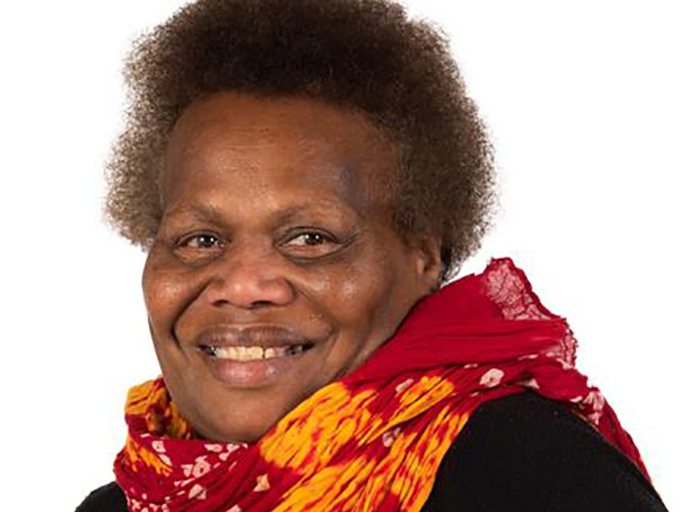 ABC’s Caroline Tiriman … “who were those people talking on the radio?” Image: ABC

PROFILE: By Scott Waide in Lae

For a Tolai girl growing up in Papua New Guinea between 1960 and 1970, career options were very limited. Forty years ago, that was part of the story for now veteran broadcaster Caroline Tiriman for the Australian public network ABC.

“My mother wanted me to get married,” Caroline says. “It was an arranged marriage. I didn’t know the guy. He was from the next village and I went to school with his sisters.”

Caroline Tiriman had just completed high school at the Our Lady of the Sacred Heart and her mother insisted that she ditch any plans for a job outside of the East New Britain Province.

While Tiriman was under a lot of pressure from her mother, her dad, George, was quietly supportive. George Tiriman was a cook who worked for the small community of foreign Catholic priests.

“I was so unhappy and I ran away back to the school. I told the principal that my mother wanted me to get married and I didn’t want to do that.”

Through the school’s help, Caroline was assisted by a careers officer who found her a job with the old government Post and Telecommunications company as a clerk.

Found a job
George Tiriman was very happy when Caroline told him that she had found a job in Port Moresby.

“He helped me run away to Port Moresby. He took me to town and then to the airport and saw me off.”

It wasn’t long before another opportunity presented itself. Caroline Tiriman applied for another clerical job with the National Broadcasting Commission (NBC), later corporation, which was set up by the ABC in 1973, two years before independence.

Her path towards broadcasting was largely due to a childhood fascination for radio broadcasting.

“I used to wonder: ‘Who were those people talking in the radio? When I was in grade eight or nine, the NBC had a programme called Ring for Record and it was wonderful. We also listened to news and current affairs in class.”

If there is one important lesson from Caroline’s life, it’s the willingness to seize opportunities even if the possibilities are seemingly impossible. While at the NBC in Port Moresby, her colleague and fellow veteran broadcaster, Kenya Kala, encouraged her to apply for a job with the ABC Tok Pisin service in Melbourne.

The job was advertised in The Age newspaper. She applied and within four months, her new boss, George Sivijs, called her up to welcome her to the ABC.

Tok Pisin translation
“During the interview, he gave me a 10 minute bulletin to translate into Tok Pisin. And in Rabaul, we didn’t speak Tok Pisin. I learned a bit of Tok Pisin in school but I didn’t speak much of it.

“Here, I was expected to translate English into Tok Pisin. It took me about an hour to translate the bulletin.”

Within the next few months, Tiriman prepared for the biggest transition in her life – her move to Australia permanently. As she was about to leave for Melbourne, she called her dad who was in Lae, ill with cancer.

“I said I got a job with the ABC and I am going to Australia. He said: ‘That’s alright. You can go.’”

But within weeks, her brother called and asked her to delay her travel to Australia because her dad, her greatest supporter, had passed away. Instead of traveling to Australia, Caroline Tiriman spent the next month being with her mother and her family.

Over the next 40 years, Caroline Tiriman became one of the most recognised Melanesian voices in PNG, Vanuatu and the Solomon Islands.

Along with the small family of Australian-based PNG broadcasters, Caroline Tiriman, was among several others who set the standards for PNG’s Tok Pisin broadcasters.

Now, when she is asked what she was going to do after 40 years, she says: “I just want to take it easy… listen to the birds, go to the bush and look for galip nuts and just talk with family late into the night.”

Graham Davis: Why Bainimarama has slammed me in the Fiji ‘state’ media

Ruth Bader Ginsburg forged a new place for women in the...

This is why the fight over the Supreme Court could make...