Muslim students at Auckland University of Technology have praised the gestures of kindness they have received from fellow students and the New Zealand community following last Friday’s terror attack in Christchurch when 50 people were massacred.

The students reflected as New Zealand was poised for a national day of mourning vigils, including a two-minute silence in solidarity across the nation after the Friday Muslim call to prayer relayed by the public broadcasters RNZ and TVNZ at 1.30pm.

Having just returned to Auckland from Christchurch where she was visiting friends and family – some of whom were wounded in the attacks – first year student Ruqaiyah Hanif said the support she had received since Friday had been overwhelming.

“Today I was coming on the train alone and I know as a Muslim we are told to stay in groups just to be safer, I had these young men approach me and they just sat with me and talked with me through the train ride,” she said.

“It was just really nice and comforting to know that there are people that care, and they’re everywhere.”

Hanif, who is in her first year of a business degree, said that while she knows people who were killed in the attacks, the strength shown by those recovering is inspiring.

“I visited the Al Noor Mosque and the response centre and met a woman who lost her husband and she was so strong. These people are an inspiration to us.”

The Al Noor Mosque was the first of the two mosques attacked in last Friday’s shooting. 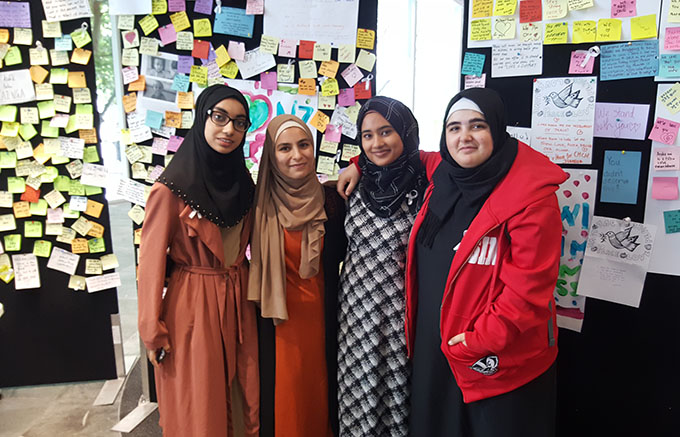 Safe and secure
Fourth year business student Samirah had also noticed the support shown at AUT, saying the measures taken by the police and campus security had made her feel safe and secure.

“I had a police officer approach me and say ‘if there is anything I need we’re around campus and we’re around the Masjid as well’.

“We’ve got prayers coming up on Friday and people have said, ‘we will form a human chain around you so we can make sure you’re safe inside.’”

The AUT Masjid has been under guard by campus security this week and police have also been regularly patrolling the area.

Doctoral student and campus security guard Omer Bin Nasir, who has been stationed outside the AUT Masjid, said that while Friday was a dark day Muslims were touched by the efforts of the public and the government.

“Last Friday was black Friday for Muslims, for New Zealand, but after that, the way the government and Prime Minister Jacinda Ardern has addressed this issue, I think Muslims living in New Zealand feel much more secure, and they feel they are part of this country.”

Bin Nasan, a former television journalist from Pakistan, who is researching how domestic violence is portrayed in the New Zealand media, said he had experienced racism and bullying in this country before. The issue was resolved quickly, however, after he contacted police. 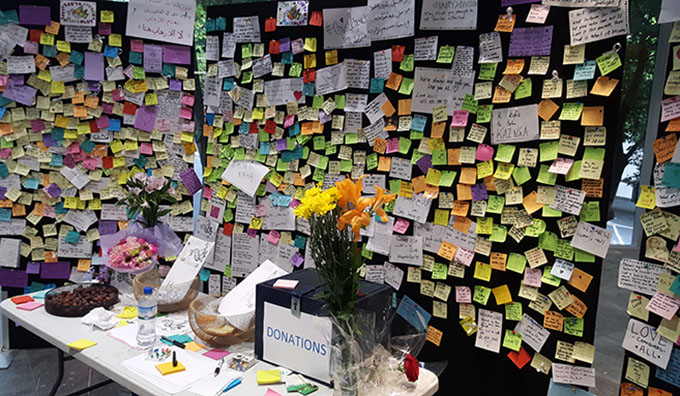 Support messages from AUT students and staff at a display about Islam on campus this week. Image: Michael Andrew/PMW

Despite the outpouring of public support in the aftermath of the massacre, other students have echoed Bin Nasan’s experience of racism in New Zealand. Some have even been subjected to abuse since Friday.

“There have more attacks on Muslims from Friday until now. My friend was attacked and my house was attacked,” said student Nora Rahimi.

“Some people realise their agenda is being spread out and they’re like, hmmm, this is acceptable now.”

Rahimi, who is studying for a Bachelor or Arts, said the accused terrorist should have been on a security watch list prior to the attack.

“Despite that I am very happy that the government is taking big steps forward to help us and the community.”

Office manager Zara Jawadi felt the same way. However, she stressed the need for ongoing education about all religions including Islam.

Get educated
“I think people should be inspired now to get out there and educate themselves, and see for themselves what our religion is all about, not just Islam but all the other religions in this country.”

Jawadi, who works for the charity New Muslim Project also said that ongoing racism, no matter the context, was not acceptable.

“Each of us has a responsibility to stand up against racism, whether it’s a small comment or a joke, don’t let that be ok anymore.”

The other students agreed that consistency was the best way to prevent further attacks. They hoped the sense of unity felt after Friday would continue.

“We want to stay as a country, unified, always.” 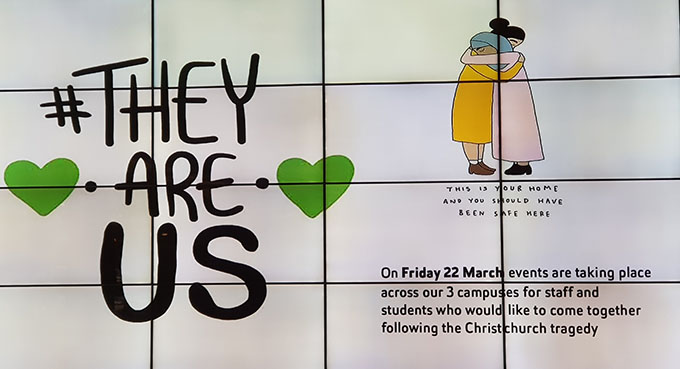