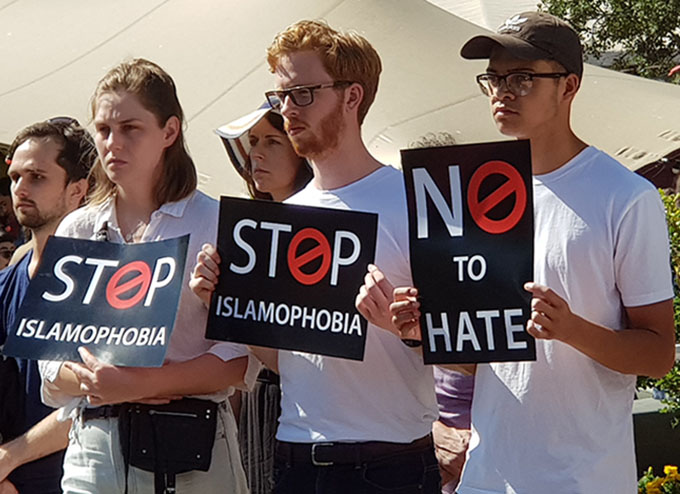 Hate speech … “The problem of socially-conditioned hatred is so much larger and more intricate than the capacity of any sort of censorship to control it.” Image: David Robie/PMC

Religion and race-based attacks will continue as a result of the rise of online hate speech, says a leading New Zealand academic.

He was responding to a media focus on racism and Islamophobia in news media this week, following last Friday’s massacre in which 50 people were killed by a right-wing terrorist.

READ MORE: Hate speech – we need to understand the damage it does

“It provides unfiltered ideas and arguments for those who are pliable and interested. And it tells others what you have done and got away with,” said Dr Spoonley, who gave a public lecture on the topic at the National Library on Tuesday.

Prior to the Christchurch attack, the accused terrorist was active on far-right online forums that promoted anti-Islamic sentiment.

In a recent article published by the Pacific Media Centre, Dr Spoonley wrote that he had personally encountered such hate speech.

Hateful comments
“I looked at what some New Zealanders were saying online. It did not take long to discover the presence of hateful and anti-Muslim comments.

“It would be wrong to characterise these views and comments as widespread, but New Zealand was certainly not exempt from Islamophobia.”

Recent research reports similar findings. According to a 2018 Netsafe survey of adult New Zealanders, 30 percent of participants had encountered online hate speech targeting someone else while 11 percent of all New Zealanders had been personally targeted themselves.

Religion was the most common reason for the abuse, followed closely by race and ethnicity.

While the internet has enabled such abuse to be shared more effectively, some argue that hate speech is an inherent issue in New Zealand society and has been since the days of early colonisation.

“This country was founded on hate speech,” said Associate Professor Camille Nakhid, an AUT sociologist and chair of the PMC advisory board.

“I suppose they didn’t call it hate speech at the time, but the taking of Maori land, the denigration of people considered worthless, the marginalisation of their customs through laws and media, I’m still struggling to think why New Zealanders cannot see the correlation.”

Racism unchecked
A researcher of marginalised and minority groups, Dr Nakhid said the attacks such as the mosque ones in Christchurch were an inevitable result of the racism that went unchecked in New Zealand society.

“We saw the danger of hate speech on Friday. If you look at what New Zealand media personalities have said about migrants and refugees, this is what it would lead to.”

There has been a number of recent controversies involving on-air racism, most notably when Newstalk ZB’s Heather du Plessis-Allan referred to Pacific countries as leeches.

In the wake of Friday’s massacre there has been a public outcry calling for the regulation and censorship of such speech in order to prevent further race and religion-based attacks.

However, AUT professor of history Paul Moon said that while a desire for censorship was an instinctive response to hate-based events, it would not address the root cause of the problem.

“Censorship would be fruitless as a means of prevention because it addresses only a small part of the symptom, rather than the underlying cause” he said.

“The problem of socially-conditioned hatred is so much larger and more intricate than the capacity of any sort of censorship to control it.”

Isolation dangerous
While he said that there was cause to re-evaluate the limits of free speech in New Zealand, stifling speech could often create a dangerous climate of isolation.

“What the Christchurch killer’s manifesto revealed was a profound degree of ignorance, isolation, and self-loathing,” he said.

“It was precisely a lack of exchange of ideas with the wider community that contributed to such a warped and manifestly dangerous view of the world.”

While the national grief has been palpable in the days following the massacre, the majority of the public has galvanised around New Zealand’s Muslim community, offering support, laying flowers at mosques and holding vigils of solidarity.

This, said Dr Moon, was the best way to counter hate speech.

“Participation, learning, and sharing are among the best antidotes to isolation, and the sort of hatred that can ferment from such social separation.”