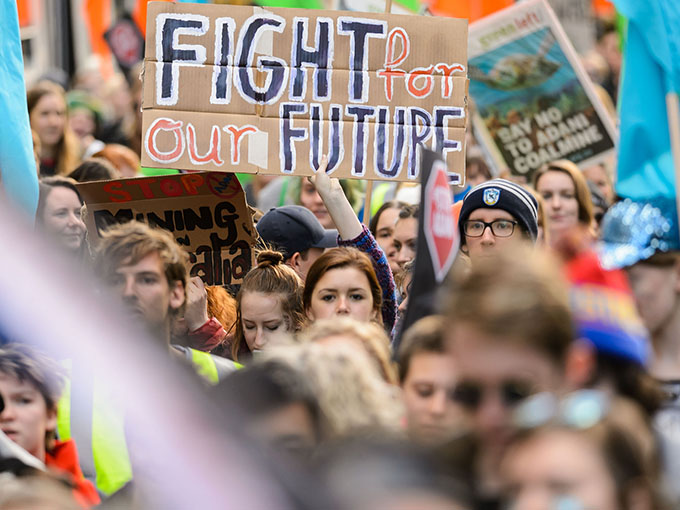 Young people “know the consequences of the current shameful inaction both for themselves and future generations. This should be a moment for stark self-reflection by our political class.” Image: Strike 4 Climate

Amnesty International today warned that the failure of governments to tackle climate change could amount to the greatest inter-generational human rights violation in history. a

The London-based rights organisation welcomed a global day of school strikes against climate change planned for tomorrow by young people.

This is an important social justice movement that is mobilising thousands of people to peacefully call on governments to stop climate change.

“It is unfortunate that children have to sacrifice days of learning in school to demand that adults do the right thing.

“However, they know the consequences of the current shameful inaction both for themselves and future generations. This should be a moment for stark self-reflection by our political class.

“Instead of criticising young people for taking part in these protests, like some misguided politicians have done, we should be asking why governments are getting away with playing truant on climate action.”

“Children especially are more vulnerable to climate-related impacts, due to their specific metabolism, physiology and developmental needs,” Amnesty said in a statement.

“Climate change also poses a risk to their mental health; children exposed to traumatic events such as natural disasters, exacerbated by climate change, can suffer from post-traumatic stress disorders.”

Naidoo said: “Climate change is a human rights issue precisely because of the impact it is having on people. It compounds and magnifies existing inequalities, and it is children who will grow up to see its increasingly frightening effects.

“The fact that most governments have barely lifted a finger in response to our mutually assured destruction amounts to one of the greatest inter-generational human rights violations in history.”

Millions of people are already suffering from its catastrophic effects – from prolonged drought in sub-Saharan Africa to devastating tropical storms sweeping across South-east Asia and the Caribbean.

Devastating heatwaves
During the summer months for the northern hemisphere in 2018, communities from the Arctic Circle to Greece, Japan, Pakistan and the USA experienced devastating heatwaves and wildfires that killed and injured hundreds of people.

“Children are often told they are ‘tomorrow’s leaders’. But if they wait until ‘tomorrow’ there may not be a future in which to lead. Young people are putting their leaders to shame with the passion and determination they are showing to fight this crucial battle now,”  Naidoo said.

The latest pledges made by governments to mitigate climate change— which are yet to be implemented—are completely inadequate as they would lead to a catastrophic 3°C increase in average global temperatures over pre-industrial levels by 2100.

Amnesty International calls on states to scale up climate action substantially and to do so in a manner consistent with human rights.

One of the crucial ways this can happen is if people most affected by climate change, such as children and young people, are engaged in efforts to address and mitigate climate change, while being provided with the necessary information and education to participate meaningfully in such discussions, and included in decision-making that directly affects them.

“Every day that we allow climate change to get worse ultimately makes it harder to stop and reverse its catastrophic effects. There is nothing stopping governments from doing everything in their power to reduce greenhouse gas emissions within the shortest possible time-frame.

“There is nothing stopping them from finding ways to halve emissions from their 2010 levels by 2030, and to net-zero by 2050, as climate scientists have called for,” said Naidoo.

“The only thing standing in the way of protecting humanity from climate change is the fact that our leaders lack the political will and have barely tried. Politicians can keep making excuses for their inaction, but nature does not negotiate. They must listen to young people and take steps today to stop climate change, because the alternative is unthinkable.”