By Lance Polu in Apia

World Rugby must adopt a “one country one national team” in world competitions as it is done in the Olympics and all the other world sports, says the prime minister of Samoa who is also his nation’s rugby chairman.

This means the United Kingdom must have one rugby team to incorporate England, Ireland, Scotland and Wales in the future.

“We have perpetuated this absolute nonsense – of four national teams by the United Kingdom – for so long and the worst part is the silence from the older unions like South Africa, New Zealand and Australia in the Southern Hemisphere. Their silence speaks volumes,” said Tuilaepa, who will attend his first World Rugby Council meeting in Dublin in a few weeks. 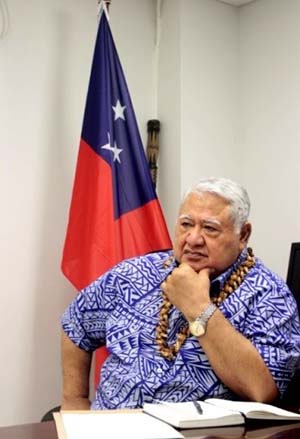 “Rugby is a 20th century sport, where the colonial mindset is a thing of the past. So as long as this abnormality continues in World Rugby, with four national teams for the United Kingdom alone, the voting power will always be skewed in favour of the kind of decision-making that is not inclusive and is harmful to the best interests of the sport internationally.”

Tuilaepa said the new league means that not only are Pacific teams excluded, but all other rugby playing nations will be relegated to second class status.

“Which is contrary to the often-proclaimed world rugby objectives of growing the sport internationally; and to care for the welfare of our 9 million rugby players; and sustain the interest of over 300 million rugby fans worldwide,” he said.

‘Breeding farms’
“This new concept will treat Tier 2 Unions as mere breeding farms for the Rich 12 to pick and choose players from.

“Then on top of that, players aged 20 years in 2022, at the height of their careers in the island teams will be denied the opportunity to play top rugby for the whole period of 12 years.”

A “one nation one national team” policy is one of three major changes Tuilaepa wants to raise the quality and incorporate fairness in to competitions, for the sportsmen and sportswomen as well as the unions themselves.

Firstly, the eligibility rules should be more liberal. Like those adopted by World Rugby League.

The best approach for Tier 2 nations is for member unions to pick the best players for their test matches then allow unselected players to play for the country of their roots. In this way, competitiveness is maintained and the competition becomes more exciting for the fans worldwide.

Secondly, the gate-sharing of the amateur days of rugby, in which the host union takes all, should be replaced with a more professional sharing ratio of 50/50 for the visitors and host team, for any competition.

“This will ensure a more balanced distribution of the gate takings for games held in rich or poor nations.

Gate sharing
“If this gate sharing is modernised to a sharing ratio that appropriately reflects the professional era we have long been in, the revenue derived from the sweat of our island players when touring the super-rich venues of England is enough to meet our yearly budget for every annual tournament we participate in, every year in the Northern Hemisphere,” he said.

“Then Tier 2 nations should never have to resort to or be branded as beggars, depending on handouts.

“The current annual tours by Tier 2 nations only serve to fill the pockets and replenish the already fat bank accounts of the Irish, Scottish, English, Welsh, French and Italians every year and our small Tier 2 Unions continue to struggle, year in and year out, with huge bank overdrafts.”

Tuilaepa also suggested establishing a Tribunal “by law to adjudicate on complaints” raised by affected members.

“Perhaps it is time for a world tribunal, established especially in a neutral venue like “The Hague”, to adjudicate on contentious issues that are so blatantly wrong and which destroy the spirit of sportsmanship for millions of the world’s rugby youths of today that will become world leaders of tomorrow.

“Their hypocrisy is very clear. We can see it’s just lip service when there is talk of development for Tier 2 Nations.

“The ‘do as I say and not as I do’ syndrome is alive and well in this popular sport of world rugby.

“This is a more positive pathway for Tier II rugby nations to move up the ladder in world rugby.”

This article by Talamua chief editor Lance Polu is republished by the Pacific Media Centre with permission.