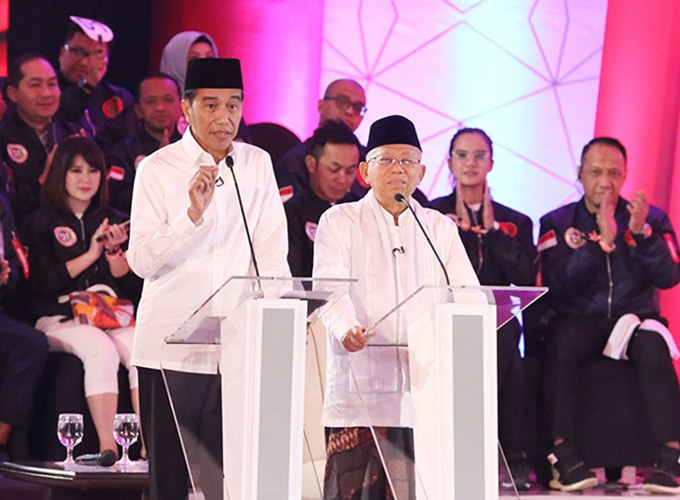 President Joko “Jokowi” Widodo appears to have gone on the offensive against his challenger in the upcoming presidential election Prabowo Subianto as the second presidential debate draws nearer, reports The Jakarta Post.

Over the weekend, Jokowi made strong remarks slamming his rival in his speeches, ranging from criticising Prabowo’s statement that Indonesia could become extinct to accusing the rival camp of using foreign consultants to prepare themselves for the election.

The incumbent also defended Finance Minister Sri Mulyani Indrawati against Prabowo’s statement that described her as a “debt-printing minister” in relation to swelling government debt, as Widodo implied that the former military general did not understand macroeconomic issues.

“I can only convey [the facts] as they are. How can I stay silent and continue to remain patient? I will not,” President Widodo said in Jakarta on Sunday, “I can [play rough] once in a while.”

The statement came two weeks before the second election debate, in which Jokowi and Prabowo are expected to trade blows on issues surrounding food, energy, natural resources, the environment and infrastructure, reports The Jakarta Post.

During his 2019 presidential campaign event in Semarang, Central Java, President Widodo said the most important thing was that he conveyed facts and data in his statements.

“What’s important is [we] don’t produce outbursts of lies […] and hoaxes,” he said on Sunday, in an apparent jab at Prabowo supporters who have been implicated in spreading misinformation.

Dhani was found guilty for hate speech in connection with a tweet he posted that incited people to attack supporters of former Jakarta governor Basuki Tjahaja Purnama.

Fellow opposition activist Ratna Sarumpaet, a former member of the Prabowo-Sandiaga campaign team, is currently in police custody awaiting trial for violation of the same law, after falsely claiming that she had been assaulted by three unknown assailants last September.

She later admitted that the bruises on her face were the result of cosmetic surgery.

President Widodo’s recent remarks, however, are not the first time that the incumbent has taken the offensive against political attacks that have targeted his administration over the last four years.

In the past few months, the incumbent fumed over accusations that he was affiliated to the now-defunct Indonesian Communist Party (PKI), a rumor which started during his 2014 presidential election campaign.

He has also refuted allegations that he is a foreign puppet, pointing out that Indonesia had officially become the majority owner of PT Freeport Indonesia (PTFI) with 51.23 percent of ownership during his tenure.