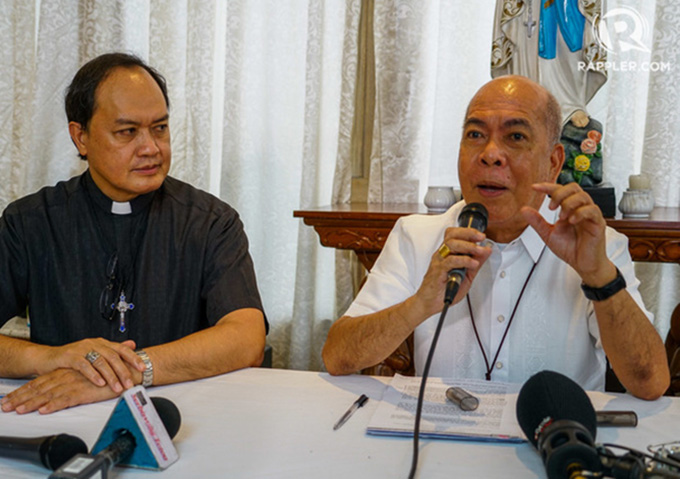 By Paterno Esmaquel II in Manila

The Catholic Bishops’ Conference of the Philippines (CBCP) has slammed the “cycle of hate” in the country as seen in the Jolo Cathedral bombing that killed at least 20 people – among them churchgoers – in Mindanao.

“The recent bombing of the cathedral of Jolo where scores of people were killed and several more were injured is a further evidence to the cycle of hate that is destroying the moral fabric of our country,” said the CBCP in its pastoral statement after its 118th plenary assembly over the weekend.

The CBCP statement was signed by the conference president, Davao Archbishop Romulo Valles, and read by its vice-president, Caloocan Bishop Pablo Virgilio David, in a press conference yesterday.

READ MORE: The real culprits behind the Philippine cathedral bombing

The bishops in their statement noted “how the culture of violence has gradually prevailed in our land.”

“Lately, we have also been on the receiving end of cruel words that pierce into the soul of the Catholic Church like sharp daggers,” said the CBCP, in apparent reference to the tirades of President Rodrigo Duterte against the Catholic Church.

“We have silently noted these painful instances with deep sorrow and prayed over them. We have taken our cue from Pope Francis who tells us that in some instances, ‘the best response is silence and prayer,’” said the CBCP.

On the Jolo Cathedral bombing, Valles told reporters: “Such incident is very sad, very tragic – almost difficult to imagine that man can do that to his fellow brothers and sisters, but yet as believers, as Catholics, we must go back to our faith, look inside our hearts how to respond to this evil deed…with good. That is the strength of our faith in this situation especially it’s a Catholic cathedral that was bombed.”

Asked if the President’s words had contributed to this “cycle of hate,” Bishop David answered, “I think your guess will be as good as mine.”

Cagayan de Oro Archbishop Antonio Ledesma, who sat in the same press conference, added that the Jolo Cathedral bombing “jeopardises the peace process in Mindanao, especially after the plebiscite on the Bangsamoro Organic Law, which in effect is really a peace treaty, a peace agreement, between the government panel and the armed groups of the Muslim communities.”

“We hope that this bombing of the cathedral will not sidetrack us, the majority communities of both Muslims and Christians, from the path of lasting peace through the Bangsamoro Organic Law,” Archbishop Ledesma said.

The CBCP said, “In the midst of spiritual warfare, Saint Peter admonishes us to ‘be sober and alert’ especially when the enemy attacks ‘like a roaring lion, looking for someone to devour.’”

“As members of God’s flock, we must learn to be brave, to stick together, and look after one another,” the bishops said.

Melbourne’s second lockdown spells death for small businesses. Here are 3 things government can do to save them

Victorians, and anyone else at risk, should now be wearing face masks. Here’s how to make one

Victorians, and anyone else at risk, should now be wearing face...

Six-week lockdown for Melbourne as record 191 new cases in latest...

Is the airborne route a major source of coronavirus transmission?