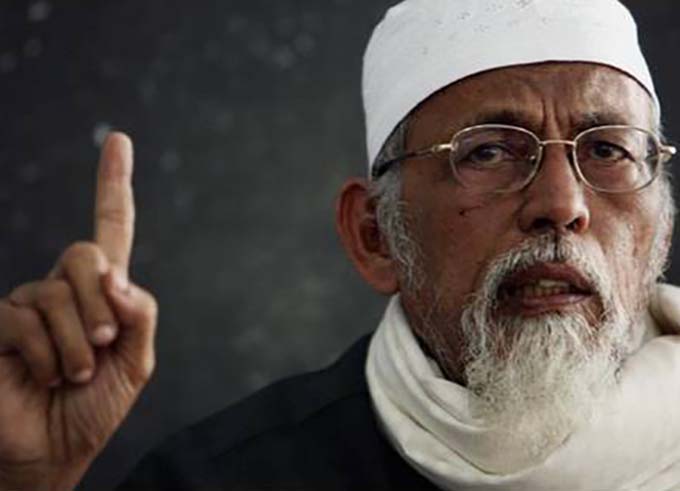 Indonesian President Joko Widodo says a radical Muslim cleric linked to the 2002 Bali bombings would only be released from jail if he pledged loyalty to the state and its ideology, following news he would be freed unconditionally sparked criticism – including a stinging editorial in the country’s national English language daily.

President Widodo had declared last week that Abu Bakar Bashir, 81, would be freed on humanitarian grounds, citing his age and poor health.

But a presidential statement said yesterday it would be a “conditional release”.

Condemning the release decision, The Jakarta Post said: “The timing and circumstances of the President’s decision are so suspicious that one wonders whether his health condition was a factor at all.”

Bashir was convicted in 2010 under anti-terrorism laws for links to militant training camps in Aceh province and jailed for 15 years.

Although linked to the Bali attacks and a bombing at Jakarta’s Marriott Hotel in 2003, Bashir was never convicted for them and denied those ties.

The Jakarta Post’s editorial board published the following opinion article:

‘Wrong on so many levels’
“There is nothing wrong with granting an old and ailing felon conditional release or even a pardon on humanitarian grounds. But President Joko ‘Jokowi’ Widodo’s decision to approve the early release of 81-year-old terror convict and firebrand cleric Abu Bakar Bashir is wrong on so many levels.

“It is not impossible to pardon the ailing cleric on humanitarian grounds, but the timing and circumstances of the President’s decision are so suspicious that one wonders whether his health condition was a factor at all.

“The call came only months before the April presidential election in which Jokowi will square off against his old rival, Prabowo Subianto, in a bid to secure a second term.

“Prabowo has been touted as the more Islamic candidate by hardline Islamists, while Jokowi is struggling to convince voters he is not a communist, even after naming the leader of the nation’s most influential Islamic institution as his running mate.

“Given the political backdrop, it is too easy to believe the move was just another attempt by Jokowi to win Muslim votes.

“Yusril Ihza Mahendra, the lawyer for the Jokowi-Ma’ruf Amin campaign, has dismissed such speculation. Mahendradatta, Bashir lawyer, has also claimed that his client’s release has nothing to do with politics, that it is not a ‘political gift’ from Jokowi.

“The claim is hardly convincing. Bashir’s lawyers had long cited Bashir’s deteriorating health as the primary reason for his release, or him being put under house arrest. The government had ignored the request. So why the change now?

“Moreover, the Jokowi administration has been far from transparent in explaining the legal basis for Bashir’s release.

“Days after the decision was made public, officials said it was unclear if Bashir was pardoned or granted conditional release. It is hard to say which.

Presidential pardon not sought
“Neither the cleric nor his lawyer have ever sought presidential pardon. The cleric is neither eligible for conditional release, despite having served two thirds of his prison sentence, because he refused to sign a letter of loyalty to the state ideology Pancasila — a requirement for all terror convicts.

“Yusril argued Jokowi could just change or ‘ignore’ the policy, as it is only stipulated in a ministerial regulation, not a law. While it is possible to tweak the regulation, one wonders why Jokowi needs to go through all that for Bashir.

“This leads to another issue: fairness.

“The President has often pledged to not interfere with the law. Only recently, Jokowi cited the exact argument to reject calls for him to grant clemency to a housewife jailed for inadvertently exposing the man accused of sexually abusing her.

“Jokowi is also merciless to drug convicts. Last July, a terminally ill Pakistani drug convict on death row died in prison. The man claimed innocence and Jokowi refused to free him despite his health condition and plea for justice.

“The President has the prerogative to pardon convicts, but he is obliged to justify his action before citizens. His decision on Bashir was poorly timed, legally flawed and insensitive. It sent all the wrong messages to many of his supporters as well as the international community.”