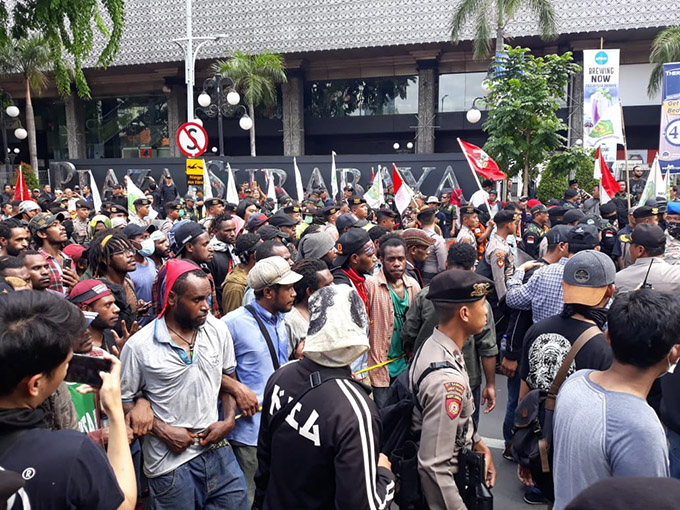 Hundreds of Papuan Students Alliance (AMP) in march in Surabaya to commemorate December 1, a day they consider to be West Papua liberation day, on Saturday. Image: Wahyoe Boediwardhana/jakarta Post

By Arnold Belau in Jayapura and Wahyoe Boediwardhana in Surabaya

More than 500 Papuans in several cities across Indonesia and West Papua were arrested following rallies at the weekend marking December 1 to commemorate what many Papuans claim to be the birth of West Papua nation in 1961.

The lawyer of the arrested Papuans, Veronica Koman, said in a statement on Saturday that 537 people were arrested in Kupang in East Nusa Tenggara, Ternate in North Maluku, Manado in North Sulawesi, Makassar in South Sulawesi, Jayapura, Asmat and Waropen in Papua and Surabaya in East Java.

Among the total, 322 were arrested in Surabaya.

In Papua, 90 people were arrested in separate places and times.

On Friday, a day before the rallies, joint forces of the Indonesian Military and the National Police searched the headquarters of the National Committee for West Papua (KNPB) in Kampung Vietnam in Jayapura.

The following day, the joint force arrested 89 people in Abepura in Jayapura municipality, in separate places in Jayapura regency and in Yapen regency. As of Sunday, all 90 had been released by the police.

“I have ordered [Kupang Police chief] to treat them well,” Raja said Saturday.

In Surabaya, which saw one of the biggest December 1 rallies, a clash occurred between about 300 people grouped under the Papuan Student Alliance (AMP) and other groups that accused the Papuans of “committing treason”.

Seventeen Papuans were injured, with some sustaining head wounds.

The Papuan students in Surabaya made a public speech, calling on Papuans to not remain silent when it came to discrimination and restrictions on their freedom of speech. They also campaigned for self-determination for Papuans’ future.

However, the situation became tense when a group consisting of around 200 people from several mass organisations, including the Communication Forum of Indonesian Veterans Children (FKPPI) and Pancasila Youth (PP), arrived on the scene to stage a protest against AMP.

Clashing camps
The two camps launched verbal attacks at each other, which escalated into a physical altercation.

“At first, this rally ran peacefully, until we were blocked in front of the Grahadi building and then came the Pancasila Youth mass organization, which intimidated us and turned the situation into an [altercation],” AMP human rights lawyer Veronica Koman said after the incident on Saturday.

Koman said the AMP had respected the aspirations of the mass organisations, but the counterprotesters should not have incited the riot by throwing bottles and sharpened bamboo at the students.

AMP spokesperson Dorlince Iyowau said the Papuans only demanded the right to decide their own fate.

“Our main demand is the right to decide our own fate, as a democratic solution for West Papua. We want Papuans to have their own political rights,” Dolince said.

“The rally [by the alliance] was clearly a treasonous act. The PP took to the streets to prevent them [from committing treason], because the rally hurt Surabaya residents,” Juherman said.

The coordinator of the Commission for Missing Persons and Victims of Violence (Kontras) in Surabaya, Fatkhul Khoir, called on the release of the 322 people in a statement on Sunday.

Arnold Belau and Wahyoe Boediwardhana were reporting for The Jakarta Post.

3 ways these latest Iran demonstrations are different to past protests