A new Pacific aid mapping tool developed by the Lowy Institute think tank is set to immeasurably improve transparency in aid in the region.

In an Auckland first, the aid mapping tool was put on show last night by the NZ Institute for Pacific Research as a curtainraiser to the two-day inaugural Oceans and Islands conference which opened at Auckland University’s Fale Pasifika today.

He was introduced by senior lecturer in Pacific Studies at Auckland University Dr Lisa Uperesa.

“This is a part of the seminar series that has been part of the mandate for the NZIPR which is about growing capacity and disseminating research,” Dr Uperesa said. 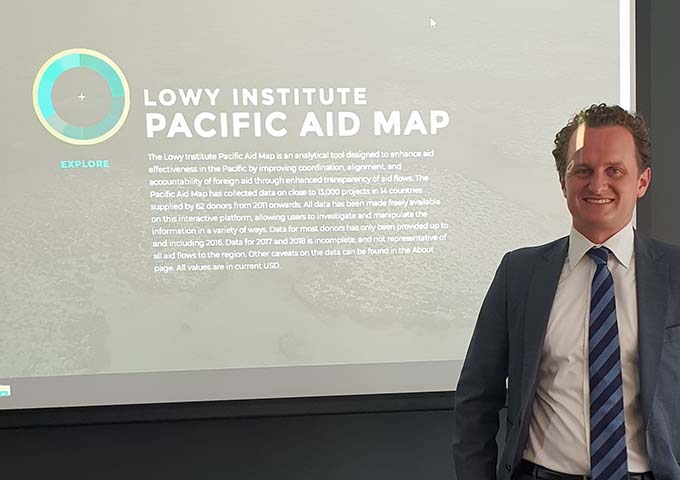 Jonathan Pryke traced the beginnings of the mapping tool to Dr Penelope Brant and her PhD project which was charting every aid project that Papua New Guinea was engaged in, in the Pacific, subsequently the project turned into the Chinese aid in the Pacific map that the Lowy Institute released in 2015.

“This map made quite a splash, first because it was in interactive form that they haven’t seen before in the Pacific, Pryke said.

China’s spread
“It also made a splash because people hadn’t fully come to grips with just how far China had spread into the Asia-Pacific Island countries that support the one-China policy.”

“We had two major pieces of feedback from this tool. The first was from the Chinese government saying, ‘thanks guys, we had no idea how much we were doing’ and second piece of feedback was this is fantastic but why don’t we do this for every donor because it is very hard to find out what Australia, New Zealand, Japan and all these guys are doing?”

Transparency leads to good governance and that was needed around the world, he said.

“There is one good reason to enhance transparency around aid, not just in the Pacific but globally, there is global mandate to improve transparency which was agreed upon by all traditional donors in 2005 in the Paris accord,” said Pryke.

“It revolves around three main reasons why transparency in aid is important.

“In theory the first is, it should improve and make it easier for donors to co-ordinate with one another in the aid space,” he outlined.

“In the Pacific Island region there is more than 62 donors operating, that is countries or multinational agencies operating in the Pacific at any given time.

“So it’s really critical in all contexts that donors are able to co-ordinate with one another to prevent overlap, to reduce the drag on recipient governments and just to be more efficient,” he said. 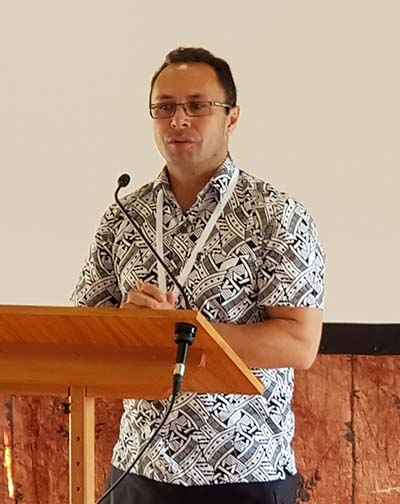 Toeolesulusulu Associate Professor Damon Salesa speaking at the opening of the NZIPR Islands and Oceans conference at the Fale Pasifika at the University of Auckland today. Image: David Robie/PMC

“It is a very messy thing to get hold of, and so having a tool like this just helps them to see what is happening in their own countries.

“So, they can better steer what donors are doing with their own development priorities.

“Having more information, and easier access to it should help Pacific countries better align aid to the priorities,” Pryke said.

The third reason for enhanced transparency was that it improves accountability of aid in the region for the media, civil society for academics, he pointed out.

“There is a lot of money going into the Pacific every year with very little oversight on how it is done outside of those giving it and those receiving it and so it is pretty more out there in the public domain.

‘Improving accountability’
“It should improve accountability and put the pressure on both sides of the equation, sender and receiver to improve the way that aid is delivered,” he summed up the third reason.

“We really were keen to do this project and so we started conversations with the Australian government to fund it.

“How we did it, from 2011 until today we requested data on 13,000 aid projects from 62 donors. We have a data from most donors be it an NGO or private sector contractor so there is a huge wealth of information.

“We had to take this huge database and put into a user-friendly, publicly available, interactive, visually-appealing interface that anyone that anyone in the world can access and actually make sense of, and so we put together this tool,” he said.

The Oceans and Islands conference was opened this morning by the Minister for Social Development and Disabilities Carmel Sepuloni and founding NZIPR director Associate-Professor Damon Salesa, who is now pro vice-chancellor (Pacific) of Auckland University.

Emeritus Professor Richard Bedford, acting director of NZIPR, will close the conference tomorrow afternoon. About 120 people are taking part in the showcase of Pacific research. 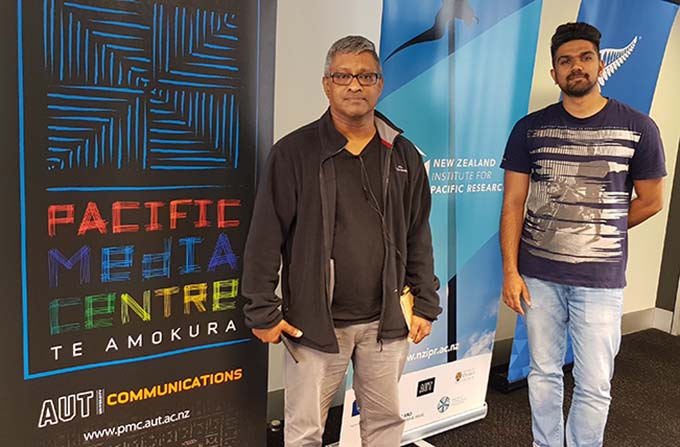