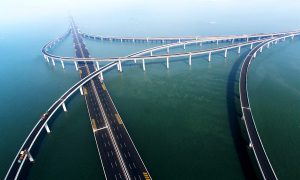 The Labour-led government in New Zealand has settled on a new mantra when it comes to addressing the US-China rivalry. It claims that New Zealand is ideally situated to become a bridge between the two great powers and an honest broker when it comes to their interaction with the Southwest Pacific. This follows the long-held multi-party consensus that New Zealand’s foreign policy is independent and autonomous, and based on respect for international norms and multinational institutions.

The problem is that the new foreign policy line is a misleading illusion. It ignores historical precedent, the transitional nature of the current international context, the character and strategic objectives of the US and the PRC and the fact that New Zealand is neither independent or autonomous in its foreign affairs.

The historical precedent is that in times of conflict between great powers, small states find it hard to remain neutral and certainly do not serve as bridges between them. The dilemma is exemplified by the island of Melos during the Peloponnesian Wars, when Melos expressed neutrality between warring Athens and Sparta. Although Sparta accepted its position Athens did not and Melos was subjugated by the Athenians.

In stable world times small states may exercise disproportionate influence in global affairs because the geopolitical status quo is set and systemic changes are incremental and occur within the normative framework and around the margins of the system as given. When international systems are unstable and in transition, small states are relegated to the sidelines while great powers hash out the contours of the emerging world order—often via conflict. Such is the case now, which has seen the unipolar system dominated by the US that followed the bi-polar Cold War now being replaced by an emerging multi-polar system aggregating new and resurgent powers, some of which are hostile to the West.

In this transitional moment the US is in relative decline and has turned inward under a Trump administration that is polarizing at home and abroad. It is still a formidable economic and military power but it is showing signs of internal weakness and external exhaustion that have made it more reactive and defensive in its approach to global affairs. China is a rising great power with global ambition and long-term strategic plans, particularly when it comes to power projection in the Western Pacific Rim. It sees itself as the new regional power in Asia, replacing the US, and has extended its influence world-wide.That includes involvement in the domestic politics and economic matters of Pacific Island states, including Australia and New Zealand.

China’s rise and the US decline are most likely to first meet in the Western Pacific. When they do, the consequences will be far reaching. Already the US has started a trade war with the Chinese while reinforcing its armed presence in the region at a time when China cannot (as of yet) militarily challenge it. China has responded by deepening its dollar and debt diplomacy in Polynesia and Melanesia as part of the Belt and Road initiative, now paralleled by an increased naval and air presence extending from the South and East China Seas into the blue water shipping lanes of the Pacific.

There lies the rub. New Zealand is neither independent or autonomous when it confronts this emerging strategic landscape. Instead, it has dichotomized its foreign policy. On the security front, it is militarily tied to the US via the Wellington and Washington Declarations of 2010 and 2012. It is a founding member and integral component of the Anglophone 5 Eyes signal intelligence gathering network led by the US. It is deeply embedded in broader Western security networks, whose primary focus of concern, beyond terrorism, is the hostile activities of China and Russia against liberal democracies and their interests.

On trade, New Zealand has an addict-like dependency on agricultural commodity and primary good exports, particularly milk solids. Its largest trading partner and importer of those goods is China. Unlike Australia, which can leverage its export of strategic minerals that China needs for its continued economic growth and industrial ambitions under the China 2025 program, New Zealand’s exports are elastic, substitutable by those of competitors and inconsequential to China’s broader strategic planning. This makes New Zealand extremely vulnerable to Chinese economic retaliation for any perceived slight, something that the Chinese have been clear to point out when it comes to subjects such as the South China island-building dispute or Western concerns about the true nature of Chinese developmental aid to Pacific Island Forum countries.

As a general rule issue linkage is the best approach to trade and security: trading partners make for good security partners because their interests are complementary (security protects trade and trade brings with it the material prosperity upon which security is built). Absent that, separating and running trade and security relations in parallel is practicable because the former do not interfere with the latter and vice versa. But when trade and security relations are counterpoised, that is, when a country trades preferentially with one antagonist while maintaining security ties with another, then the makings of a foreign policy conundrum are made. This is exactly the situation New Zealand finds itself in, or what can be called a self-made “Melian dilemma.”

Under such circumstances it is delusional to think that New Zealand can serve as a bridge between the US and China, or as an honest broker when it comes to great power projection in the Southwest Pacific. Instead, it is diplomatically caught between a rock and a hard place even though in practice it leans more West than East.

The latter is an important point. Although a Pacific island nation, New Zealand is, by virtue of its colonial and post-colonial history, a citizen of the West. The blending of Maori and Pacifika culture gave special flavor to the Kiwi social mix but it never strayed from its Western orientation during its modern history. That, however, began to change with the separation of trade from security relations as of the 1980s (where New Zealand began to seek out non-Western trade partners after its loss of preferred trade status with UK markets), followed by increasingly large waves of non-European immigration during the next three decades. Kiwi culture has begun to change significantly in recent years and so with it its international orientation. Western perspectives now compete with Asian and Middle Eastern orientations in the cultural milieu, something that has crept into foreign policy debates and planning. The question is whether the new cultural mix will eventuate in a turn away from Western values and towards those of Eurasia.

The government’s spin may just be short term diplomatic nicety posing as a cover for its dichotomous foreign policy strategy. Given its soft-peddling of the extent of Chinese influence operations in the country, it appears reluctant to confront the PRC on any contentious issue because it wants to keep trade and diplomatic lines open. Likewise, its silence on Trump’s regressions on climate change, Trans-Pacific trade and support for international institutions may signal that the New Zealand government is waiting for his departure before publicly engaging the US on matters of difference. Both approaches may be prudent but are certainly not examples of bridging or brokering.

While New Zealand audiences may like it, China and the US are not fooled by the bridge and broker rhetoric. They know that should push come to shove New Zealand will have to make a choice. One involves losing trade revenues, the other involves losing security guarantees. One involves backing a traditional ally, the other breaking with tradition in order to align with a rising power. Neither choice will be pleasant and it behooves foreign policy planners to be doing cost/benefits analysis on each because the moment of decision may be closer than expected.