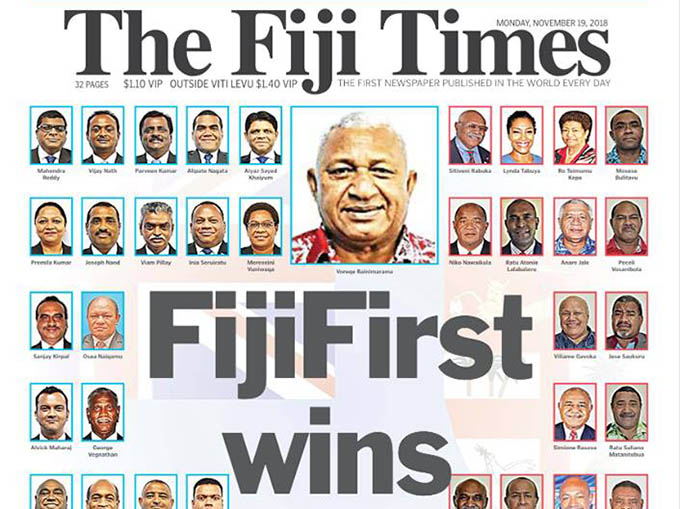 The Fiji Times editorial … “The challenge for individual voters is to cast aside differences, and unite for a common goal, to move our nation forward.” Image: PMC screenshot

EDITORIAL COMMENT: By Fred Wesley, editor-in-chief of The Fiji Times

Yesterday marked the end of the 2018 Fiji General Election.

It marked the end of a period that culminated in two weeks of intense campaigning.

In the heated battles, parties clung onto strategies they calculated would woo the important component in the election process — the voters. 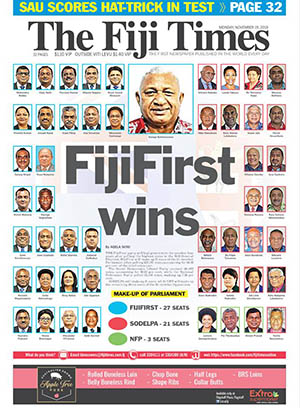 However that panned out, campaigning reached unprecedented levels of attacks, some personal at times.

The attacks inched their way onto the various social media platforms, raising the profile of this particular election.

In the end though, before the writ for election was handed over by the chairperson of the Fijian Electoral Commission, Suresh Chandra, to the President of our nation, Jioji Konrote yesterday, the masses had spoken.

The FijiFirst party got 227,241 votes when the final results were tallied. Their highest votes were from the Western Division, accounting for 91,902 of their total count.

The Social Democratic Liberal Party (SODELPA) polled the second highest votes in this year’s polls, making up 39.85 percent of the total votes cast with 181,072.

Their highest votes were from the Central Division where they collected 67,255 votes.

The National Federation Party recorded 33,515 votes when the final results were released yesterday.

The results meant FFP came off with 27 seats of the 51-member Parliament, while SODELPA came off with 21 and NFP with three to make up the 24-member Opposition.

It was good to note that the new Parliament includes 10 women, five in government and five in the opposition. Congratulations certainly are in order for Mr Bainimarama and his party.

He has the huge task of bringing together a nation that has been split in this election.

His challenge would be to understand the needs of the 227,094 voters who did not vote for his party. For now, all battles must be put on the backburner for the good of the nation.

The challenge for individual voters is to cast aside differences, and unite for a common goal, to move our nation forward.

The masses have spoken.

They have given Mr Bainimarama and FijiFirst the mandate to govern for the next four years.

We must embrace that fact.

That is the beauty of democracy.

Republished from The Fiji Times, 19 November 2018.

Win-win: how solar farms can double as havens for our wildlife