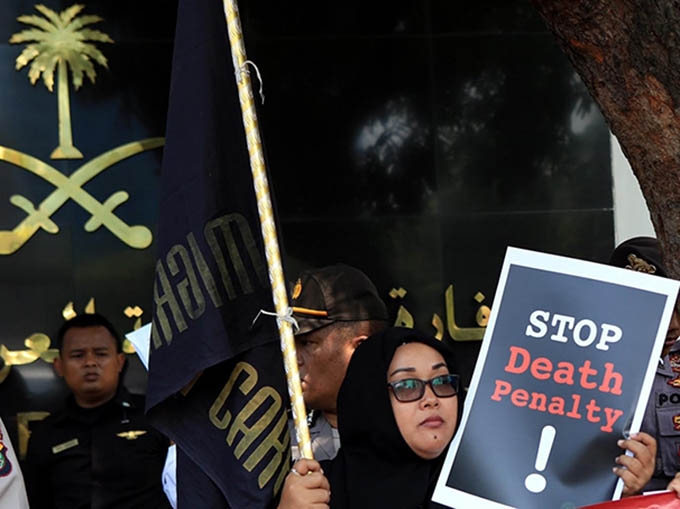 Migrant Care activists hold a rally in protest against the execution of an Indonesian migrant worker in front of the Saudi Arabia Embassy in Jakarta on March 20, 2018. Image: Seto Wardhana/Jakarta Post

By Dian Septiari in Jakarta

The Migrant CARE advocacy group has called on Indonesia’s Manpower Ministry to cancel a recent agreement with Saudi Arabia to send Indonesian migrant workers to the kingdom in limited numbers, following the execution of Indonesian worker Tuti Tursilawati on Monday.

“President Jokowi must cancel the agreement between Indonesia and Saudi Arabia on the One Channel System [because the execution is] proof that Saudi Arabia does not fulfill the terms and conditions pertaining to the protection of the rights of migrant domestic workers,” Wahyu said in a statement.

The assured protection of migrant workers’ rights was an explicit requirement in documents signed by Manpower Minister Hanif Dhakiri and his Saudi counterpart Ahmed Sulaiman Al Rajhi on October 11, the rights activist said.

The One Channel System was a scheme agreed upon by the labour ministers that would allow Indonesia to send a certain number of workers to the Middle Eastern kingdom, bypassing a 2015 moratorium.

Tuti was sentenced to death in 2011 for beating her employer to death with a stick in self-defence against attempted rape.

She ran away but was raped instead by nine Saudi men before the police brought her into custody, tribunnews.com reported.

She was executed on Monday without prior notification to her family and Indonesian officials.

During a recent joint commission meeting between Indonesia and Saudi Arabia, Foreign Minister Retno Marsudi requested the cooperation of Riyadh to provide consular notifications in accordance with the 1963 Vienna Convention on consular relations.

“Jokowi must be truly serious in responding to a situation like this. When he met with the Saudi foreign minister, the President asked Saudi Arabia to provide protection for Indonesian migrant workers and work to resolve the [murder of journalist Jamal] Khashoggi in earnest,” Wahyu said.

“It turns out the request was simply ignored.”

‘Incel’ violence is a form of extremism. It’s time we treated it as a security threat

‘Incel’ violence is a form of extremism. It’s time we treated...

What are the characteristics of strong mental health?