A warning letter by Human Rights Watch, dated September 17, sent by 32 Members of the European Parliament (MEPs) was addressed to the EU Trade Commissioner, Cecilia Malmström.

It called for a “push for robust progress in Vietnam’s human rights record ahead of the possible ratification of the EU-Vietnam Free Trade Agreement (EVFTA)”.

“. . . loose provisions on national security have been widely used to suppress peaceful dissent and jail scores of human rights defenders. . .,” the letter said.

The letter claimed that there was a need for a series of targets that the country should meet before the agreement was handed over to the European Parliament for its approval.

The ratification of the EVFTA agreement is slated to happen at the end of this year and would rid the country of at least 99 percent of customs duties paid on exports into Europe.

Censoring reality
The words Bachelor: Vietnam contestant Minh Thu uttered to Bachelor Quoc Trung on the episode which aired on September 21 said: “I went into this competition to find love, and I’ve found that love for myself, but it isn’t with you. It’s with someone else”.

While participating in the competition over time, Thu had fallen in love with another woman, fellow contestant Truc Nhu, and they left the programme together.

“In Vietnamese pop culture, there’s a lot of people that are rumoured to be LGBT or people that hint at it. . . So to see a moment that’s unequivocal, where someone is saying that they love someone else . . . I think it’s going to be very powerful to young people,” says the shows story producer Anh-Thu Nguyen.

At this point in the history of Vietnam, few are willing to come out of the proverbial closet – in more ways than one.

Despite this, censors allowed the confession to air almost completely, a move surprising many viewers and commentators.

Vietnam, a Communist country since 1976, has seen much censorship over the years and its culture, it appears, has been no different.

Bachelor: Vietnam, currently in its first season, has faced issues of potential censorship since its inception. According to the show’s executive producer, Anh Tran, it was difficult to sell to networks.

Many of the traditional parts of the United States’ version of the show had to be edited or cut out entirely to avoid censure from censors.

The rose ceremony, for example, has to be carefully edited to avoid showing a line-up of women vying for a man – the main plot point for the show. 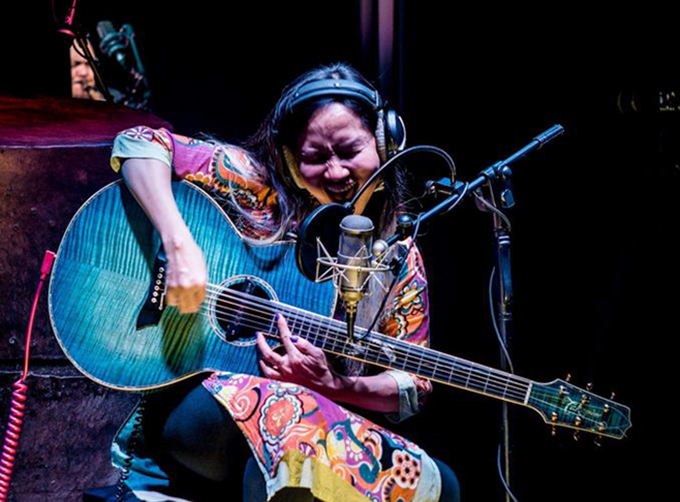 Mai Khoi, the woman who has been dubbed as Vietnam’s own Lady Gaga or Pussy Riot and who recorded the controversial number Dissent, was detained and “interrogated for eight hours”. Image: Hanoi Grapevine

Censorship of culture
Vietnam is ruled by the Communist Party, and censorship is seemingly common in the cultural realm as singer Mai Khoi could attest.

In March, the woman who has been dubbed as the country’s own Lady Gaga or Pussy Riot, was detained at the airport, and “interrogated for eight hours”.

Copies of her latest album, Dissent, were confiscated, she claimed in a Facebook post.
She has written songs about the women’s movement and LGBT rights. She also ran – unsuccessfully – for public office in the country. She now performs in secret in her own country.

The country has been a Communist nation since the 1960s, and censorship has long been a part of that.

Last month, Reuters reported that a court had jailed an activist for 12 years in prison and a further five years’ house arrest.

Nguyen Trung Truc, 44, was – according to a statement given by police – among a group called “Brotherhood for Democracy” in 2013. The group, police said, conducted “anti-government activities” with the aim of creating a system of “multi-party democracy” in Vietnam.

‘Hurt the prestige’
A second man, Bui Manh Dong, 40, was convicted over his comments on September 28.
Police said that Dong had “hurt the prestige and leading role of the [Communist] party and the state”.

Dong, and one other man, Doan Knanh Vinh Quang, were accused of encouraging people to protest against government policies or write posts that were critical of the government.

Vietnam has a high level of social media use among its citizens yet the country’s Communist government has introduced a new law which, according to Amnesty International, would force tech companies like Apple, Google, and Facebook to hand over data from their users.

“This decision has potentially devastating consequences for freedom of expression in Viet Nam,” said Clare Algar, international director of global operations for Amnesty International, in June.

“With the sweeping powers it grants the government to monitor online activity, this. . . means there is now no safe place left. . . for people to speak freely”.

Last year, it was reported that the country had built up a force of “cyber-troops” to tackle what they call “wrongful views”.

Jessica Marshall is a student journalist on the Postgraduate Diploma in Communication Studies course at AUT. She is filing articles in the Asia-Pacific Journalism Studies paper.

Word from The Hill: the Biloela Tamil family, G7 and the upcoming parliamentary fortnight