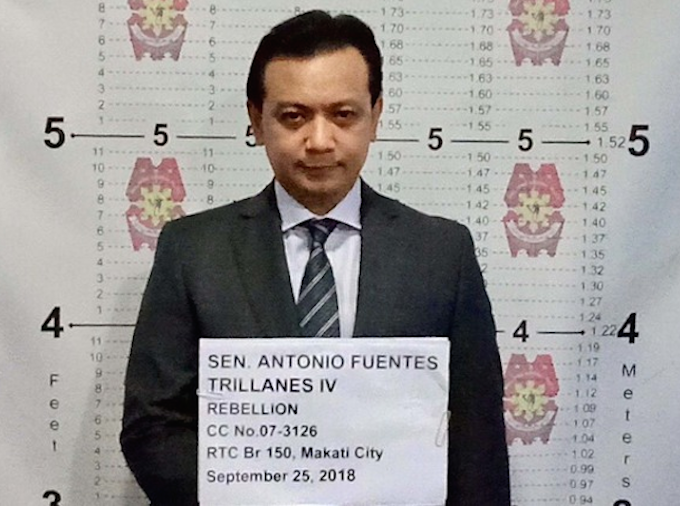 By Rambo Talabong in Manila

Outspoken critic Senator Antonio Trillanes IV has become the second opposition senator to be arrested under the Duterte presidency.

A team led by Makati police chief Senior Superintendent Rogelio Simon confirmed that the police served the arrest warrant on Trillanes yesterday for the charge of rebellion, hours after the document was released by Makati Regional Trial Court Branch 150 Executive Judge Elmo Alameda.

READ MORE: Why the Senate backed Trillanes but not De Lima vs Duterte – by Camille Elemia

Eleazar said in an interview on ANC that Trillanes voluntarily went with the arresting team. The senator had earlier said he would not resist arrest providing police presented a the proper warrant.

Trillanes was brought to the Makati City Central Police Station for charging procedures.

He was then taken to Makati RTC Branch 150 to post the bail of P200,000 (NZ$5600). He was accompanied by fellow opposition senators Kiko Pangilinan, Paolo Benigno Aquino IV, and Risa Hontiveros; as well as his Magdalo party colleagues.

Rebellion charge revived
The rebellion charge against Trillanes was revived after President Rodrigo Duterte issued Proclamation No. 572, revoking an amnesty granted to the senator in connection to the 2003 Oakwood mutiny and the 2007 Manila Peninsula siege.

Trillanes had questioned then Police Chief Ronald Del Rosa about extrajudicial killings in Duterte’s bloody, protracted war on drugs, and had also organised the testimony of former members of an alleged death squad that operated under the president while he was mayor of the city of Davao in the country’s south, reports CNN Philippines.

Another opposition senator, Leila de Lima, also a fierce critic of Duterte, has been detained in Camp Crame since February 2017, for drug charges.

Rambo Talabong is a journalist with the independent news website Rappler. Asia Pacific Report publishes under a Creative Commons licence.

Win-win: how solar farms can double as havens for our wildlife