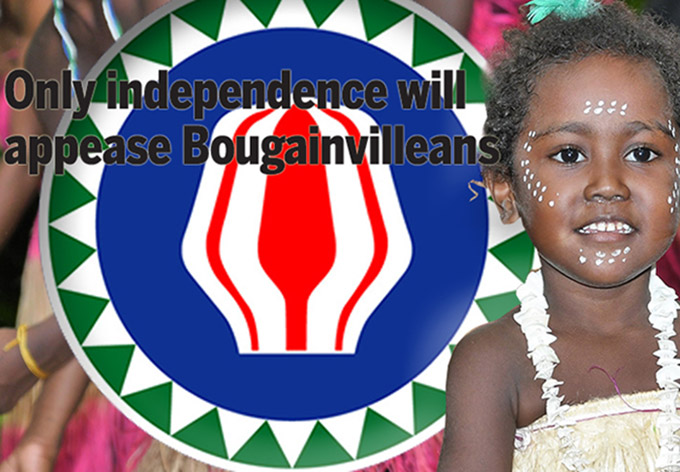 “No amount of greater powers or autonomy will appease the people – especially after the loss of over 15,000 lives during the 10-year Bougainville War.” Image: PNG Post-Courier

And no amount of greater powers or autonomy will appease the people – especially after the loss of over 15,000 lives during the 10-year Bougainville War.

Moses was speaking in reaction to comments made by Papua New Guinea’s Prime Minister, Peter O’Neill, this week, who reportedly said that the PNG Constitution did not permit the granting of independence to any province or region in the country.

“It is hard to compensate the 15,000 to 20,000 lives that were lost during the conflict even with K20 million or 100 pigs or even greater autonomy, free and just association or whatever.

“The only answer is to grant independence or sovereignty to the people of Bougainville after the referendum is conducted.

“The fact is that Bougainville already won independence through the blood that was shed during the crisis and referendum is just a process that will formalise the wishes of the people who I believe will overwhelmingly vote for independence from PNG.

“The three or four questions that are being suggested to be answered during the referendum are just to confuse the people especially those who are not educated enough to understand and interpret the questions,” Moses said referring to the questions yet to be decided by the Joint Supervisory Body for the referendum due next June 15.

Unlocking resources
He said Bougainville was ready for independence because of its vast natural resources and minerals and only independence would allow the people to unlock these resources for development under their own government and country.

“There is no economic value for Bougainville to remain under Papua New Guinea as PNG is a sinking ship and has nothing to offer Bougainville even though the Panguna mine, at one time, contributed largely to the development of the country through the national budget.

“PNG has continued to fail us in terms of providing sufficient funds to operate systems like the provincial government which it gave to us to prevent secession in the 1970s and now the autonomous government.

“What guarantee do we have that by continuing to remain as an autonomous region we will address our developmental needs as currently the ABG is cash-strapped and continues to be starved off funds legally owed to it under the peace agreement,” Moses said.

He called on all Bougainvilleans to vote for independence from PNG and prove to the world that there was overwhelming support for self-determination and independence.

“The people of Bougainville or Buka are ethnically and culturally connected to Solomon Islanders but were separated from their relatives by the British and German colonisers and included under PNG in the 1800s,” Moses said.

“So the fight for self determination dates back to the 19th century and PNG should realise by now that Bougainvilleans will stop at nothing to continue to push for their independence.”

Patrick Makis is a Papua New Guinean journalist who has worked with the PNG Department of Defence.