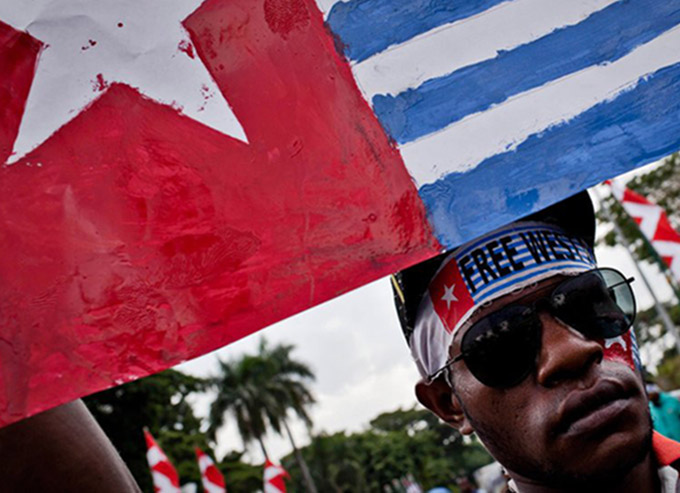 A Papuan protester with a hand painted version of the Morning Star independence flag. Jayapura police chief says the use of Morning Star attributes could be linked to “treason”. Image: Free West Papua Campaign

The 73rd celebration of Indonesia’s Independence Day last week was tinged with reports on actions from some Papuans outside and inside the provinces which upset authorities over their perceived refusal to celebrate Indonesia’s independence from the Dutch.

On August 15, a clash occurred between Papuan students and mass organisation members on Jl. Kalasan in Surabaya, East Java, as the students reportedly refused to raise the country’s red-and-white flag in front of their dormitory.

The men demanded the Papuan students comply with a regulation mandating the raising of the Indonesian flag every August 17.

A release signed by Azizul Amri of the National Students Front and Nies Tabuni of the Papuan Students Association in Surabaya said the students actually did not object to raising the flag.

They accused people from the mass organisations of attacking their dormitory before the dialogue between them had concluded.

According to the students, about 30 people from mass organisations asked them to raise the Indonesian flag. The students claimed they did not object to it but they needed time to “coordinate” with the dormitory’s caretaker, who was out of Surabaya at that time.

A clash ensued, in which a man was injured. 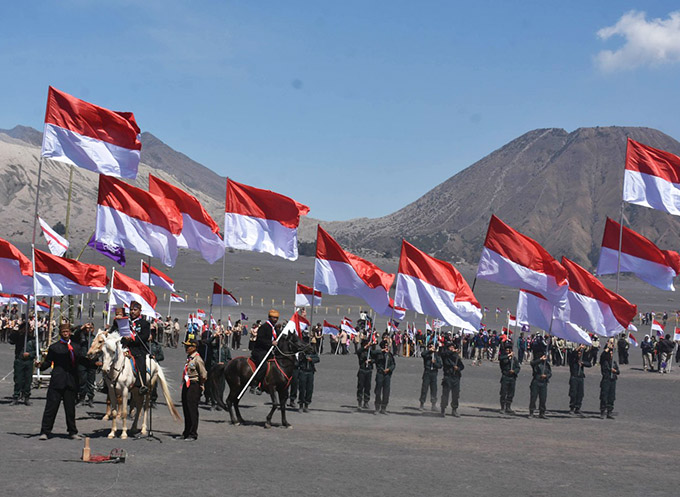 The Indonesian flag controversy: According to the Papuan students, about 30 people from mass organisations asked them to raise the Indonesian flag. The students claimed they did not object to it but they needed time to “coordinate” with the dormitory’s caretaker, who was out of Surabaya at that time. Image: Aman Rochman/Jakarta Post

Dormitory attack
Basuki, one of the mass organisation members, said as quoted by kompas.com that one of his men had been attacked by a dormitory resident wielding a sharp weapon.

The students said in their release that three members of the organisations had beat one student. The student later ran to the kitchen to retrieve a machete.

He brandished the weapon and the men ran away in a panic.

“One of them collided with another and he hurt himself from a fall,” the release stated.

Surabaya police officers then visited the scene and took dozens of students living in the dormitory to police headquarters for questioning.

But by Thursday, the students had returned to the dorm, and none of them were taken into custody.

“As many as 48 students have been returned to the dorm,” said Surabaya police criminal unit chief Senior Comrmander Sudamiran. He said the police would first gather evidence about the injured man.

Separately, during the orientation event for freshmen at Cendrawasih University in Jayapura, Papua, on August 14 and 15, senior students required the freshmen to chant free Papua slogans and bring Morning Star attributes to the campus.

The Morning Star refers to the flag used by the Papuan independence movement.

During the opening ceremony of the event, the seniors reportedly prohibited the freshmen from singing Jakarta’s national anthem, “Indonesia Raya”.

The university’s rector, Apolo Safanpo, confirmed the incident, accusing some people of imposing their “political motives” on the orientation event.

“The intruders required the freshmen to bring Morning Star attributes and chant slogans contrary to Indonesia’s ideology,” Apolo said, adding that the orientation events had been halted.

Meanwhile, Jayapura police chief Senior Commander Gustav Urbinas said the use of Morning Star attributes could be linked to treason, and therefore he had called Cendrawasih University student executive body chairman Ferry Kombo and the chairman of orientation events Agus Helembo to the police headquarters.

‘Asked for explanations’
“We asked for some explanations about the use of Morning Star attributes and the chanting of free Papua slogans,” Agus said.

Both of the students had signed a statement citing that they would not let the same incident happen again at their university, or else they would be prosecuted for “treason”.

A prominent youth figure in Papua, Samuel Tabuni, who is also the director of the Papua Language Institute, said what happened at Cendrawasih University was the students’ “spontaneous action to show their intention to create a future that is free from all threats”.

According to a 2018 Amnesty International report titled “‘Don’t bother, just let him die’: Killing with impunity in Papua”, unlawful killings by security forces remains high in Papua even after the 1998 reform began.

Amnesty International has recorded 69 cases of alleged unlawful killings between January 2010 and February, with 95 victims. Eighty-five of them were native Papuans, the report said.

The Jakarta Post provides an Indonesian perspective on events in West Papua.