“We have no home, our village is devastated, therefore I have to move my people to another location.”

The words of the village leader from a remote earthquake-affected village in Papua New Guinea’s Highlands region had an unmistakable desperation.

We met him at the Moro airfield near Lake Kutubu. My colleague Koroi Hawkins and I had cadged a couple of seats on a helicopter used by the team leading PNG’s earthquake relief effort.

The chopper was flying around the quake-affected region, offering us startling views of collapsed mountainsides and deformed valleys. The quake and its significant aftershocks had caused many major landslides and landslips.

The slides and slips had taken out a number of villages, and destroyed countless structures. The disaster is estimated to have killed at least 180 people, although in a remote region like this, nobody can give an exact figure. 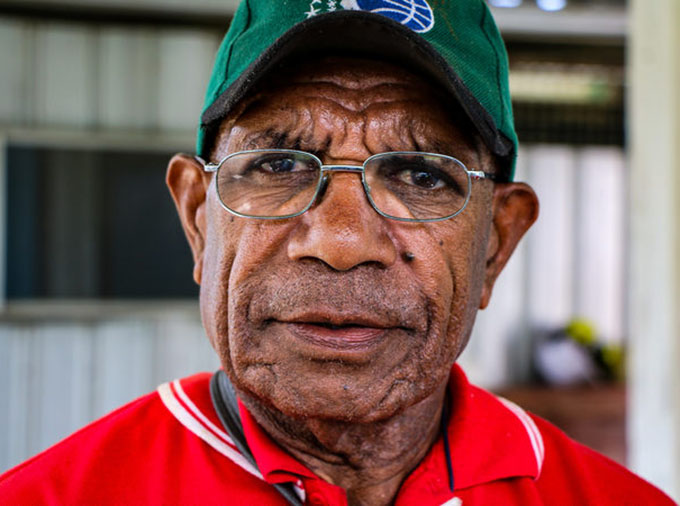 Badly isolated
When we picked him up at Moro, Richard Don told us that six people from his village had died in the disaster. The village, he explained, was now badly isolated as the main road and bridge which led to Yalanda’s general area had been cut off.

It wasn’t until we flew in with him to the remaining part of Yalanda village, perched as it is on the top of a small mountain, that the precariousness of this community’s position became clear.

The landslips which undermined the flanks of the village had taken huts, foot bridges and food gardens. Homes were collapsed or teetering on the hillside.

We walked up to the top, the village square, where dozens of villagers assembled, carrying axes and small children. Richard Don introduced us to them and they greeted us warmly. Little pigs and dogs wandered by. The kids who milled around had an almost forlorn look about them.

Don said Yalanda’s villagers, of whom there were 1300 in total, feared another big quake and sought to relocate to another location “where it’s more flatter, more good place, for them to resettle themselves”. 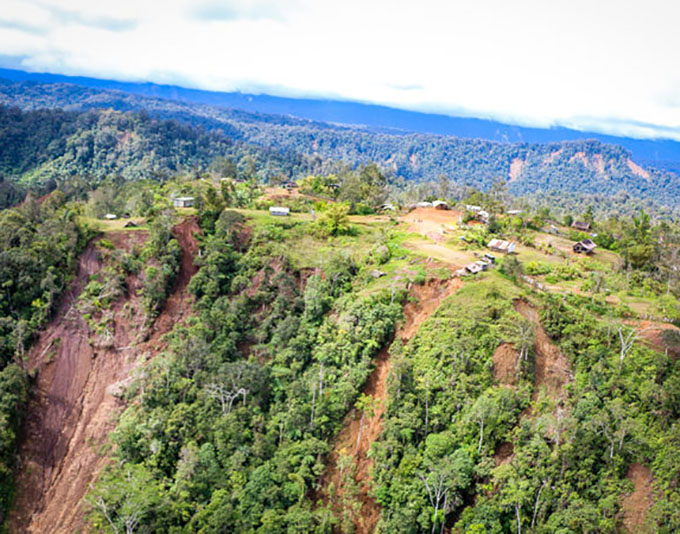 “But there are a lot of things to be done, like a road. We require a road network to be completed. I have already given the request to the prime minister.”

PNG’s Prime Minister Peter O’Neill visited Yalanda shortly after the initial quake and was aware of the village’s situation.

Basic supplies
The company Oil Search, a well established player in the local oil and gas sector, had given assistance with basic supplies and logistical support.

Don also mentioned that Yalanda had received help from the World Food Programme, the Red Cross and governments of Australia and New Zealand.

The team led by PNG’s Emergency Controller, Dr Bill Hamblin, has been helping co-ordinate relief in the region and had distributed many re-starter kits to affected communities to help them move gradually into recovery phase. However, villages like Yalanda were not easy to get to.

The village leader indicated the Yalanda community was aware that its request for infrastructure assistance, and help in relocating, would take time to process.

They had already begun clearing trees and establishing food gardens at a new village base at nearby Endela. A few people had already set up temporary, crude huts to live in at this base.

Other villagers had gone to stay at a care centre several kilometres away in Baguale. But around 800 remain in and around this desolate mountain village.

I spoke to a local pastor who conveyed in Tok Pisin (PNG language, or at least his community’s variation of it) how the Yalanda people had lived on this beautiful mountain for centuries, and that moving away would cause great sadness.

Village ‘bagarup’
But a young woman called Ruth Jeff told us in no uncertain terms how relocation was inevitable, because everything about the village was now broken, or in Tok Pisin “bagarup”.

Richard Don presented us with a ten-page report detailing Yalanda’s situation, their relocation plans, request for help and description of assistance required, including items such as water tanks, tarpaulins and ‘spiritual development’.

The villagers we met were effusive in their gratitude for the help they’d received so far. A United Nations consultant who had flown with us in the helicopter was thrilled to find a wrapper for a World Food Programme muesli bar to take back with him as evidence that their assistance had, in this case, reached its target.

Yet the Yalanda community was struggling with food and medical shortages. They were also in desperate need of water tanks and tarpaulins among other relief items.

“My village, my people, I’m very worried, we need to have that road,” Richard Don noted.

“We’ve run out of food. We made a garden, but that can’t be harvest within a month or two. So at the moment we’re very hungry now, and most of the people are really suffering.”

Pilot anxious
The time to leave rolled around quickly. The pilot was looking anxious for us to leave, as we needed to fly back to Mt Hagen before the weather packed in.

As we got in the chopper, dozens of villagers sat on the hilltop, smiling and waving at us. The visit had served as little more than a quick situation update for the relief team representative. Still, the locals seemed grateful for the opportunity to get word out about their plight.

They kept waving as we ascended. The chopper whipped up dirt and debris, trees thrashed around dramatically, and a pig ran away frantically across the village square.
The earthquake disaster has left many Highlanders facing an uncertain future.

I could still see the villagers waving as we flew off and away, until they faded like dots into the brown and green of the mountain.

Johnny Blades and Koroi Hawkins of RNZ Pacific recently travelled to Papua New Guinea for a series of special reports. This article is republished under the Pacific Media Centre’s publishing partnership with Radio New Zealand.