In The Name Of Confucius trailer for the 52-minute documentary.

A Chinese government-sponsored cultural and education programme offers Mandarin lessons around the world. But a new film raises questions about a darker side of the Confucius Institutes, reports Rahul Bhattarai of Asia Pacific Journalism.

Chinese-born Canadian film director Doris Liu has had her visa to China denied but has never faced a direct threat or interference from the Beijing government over her controversial documentary In the Name of Confucius screened in Auckland last month.

Her visa to China has been rejected because of her investigative work, she told Asia Pacific Report.

Her documentary criticises Chinese policy and political influence through the multibillion dollar Chinese government-supported Confucius Institute programmes attached to 1600 universities and schools across the globe.

READ MORE: In The Name of Confucius

AUT and Victoria University welcomed the screening of the documentary.

But the University of Auckland cancelled its public screening on the day of the event – just hours before the documentary was due to be screened.

“I had already been rejected for a Chinese visa to enter China because of my journalism before making this film,” film maker Liu said.

Recorded, threatened
However, she added that during her interviews in one of the Canadian institutes, the Confucius Institute director had video recorded her and threatened that she would report her back to Beijing.

“The director used her smartphone to film me conducting an interview with the school board representatives,” Liu said.

“She told me that she would report back to Hanban in Beijing about my media presence.”

Liu added that “the interview didn’t end happily as the school representatives stopped the interview and they all walked away.

“After that I couldn’t get access to any Canadian Confucius Institutes, except for a couple of telephone interviews.

“I could imagine that Hanban informed all its Chinese directors working at the Canadian Confucius Institute not to accept my interview requests.”

Suppressing teachings
While talking to Mack Smith of 95bFM, Dr Catherine Churchman of Victoria University said about the institute policy, “you have to teach Mandarin, you are not allowed teach Cantonese or Hokkien”, or any of the other Chinese languages and “you have to teach in the simplified Chinese characters set”.

Dr Churchman said the main reason the institutes did not allow the teaching of traditional Chinese was to “suppress people” from being able to read documents from Taiwan or Hong Kong, or many other overseas countries.

Until the 1980s, the Chinese diaspora, including in New Zealand, used traditional Chinese characters to publish their literature.

Liu said that many of the texts published in China, including the literature from the Chinese Communist Party and its foreign affairs, were only in traditional Chinese.

Suppressing the traditional Chinese was a form of “censorship that the Chinese Communist Party has over things written inside China”, she said.

“They [CI] have a lot of influence over the institute itself, they pay for half of it usually, and they pay quiet a lot of money,” she said.

Liu claimed that Victoria University received about “half a million” dollars in 2016.

While the ministry might not necessarily have had direct influence over the institute, it did provide rules about what was allowed to be taught in the institute. 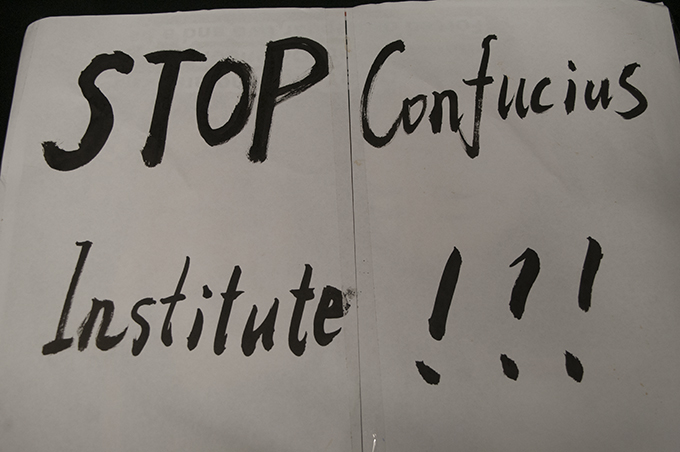 A Chinese protest placard among several against the Confucius Institutes on display at the end of the Auckland film screening. Image: Rahul Bhattarai/PMC

After Auckland University cancelled the public film screening, an official statement by
Associate Professor Phillipa Malpas said: “The event was prematurely advertised as being open to the public before it had been approved and confirmed by my faculty.

“It was subsequently approved for screening to University of Auckland staff and students.”

AUT screened the documentary at a public event on July 26 with a packed auditorium, including an Asia Pacific Report journalist present.

However, Alison Sykora, head of communications in AUT, said the Chinese Vice-Consul-General spoke to the university before the screening of the movie. The Vice-Consul had been given an invitation but AUT had not yet received a reply.

Chinese soft power
The documentary shows how China has been using CI in order to influence foreign countries through soft-power initiatives.

Michel Juneau-Katsuya, former chief of the Asia Pacific Canadian Security Intelligence Service, says in the film: “CI were used to manipulate not only the academic world, where they were implanted, but to also emanate more influence outside of the campus as well.”

The documentary says that the CI is an “infiltration organisation” that was founded in 2004 by the Chinese government under the guise of teaching foreign students Chinese culture and language.

Institute teachers were also forced to sign a contract that they were not members of the banned and persecuted spiritual group Falun Gong.

Last November, the Chinese government pressured the Japanese government in an attempt to cancel an international conference due to the planned showing of the documentary, but in spite of the pressure the screening went ahead.

The film was shown in an international human rights conference in Tokyo, receiving a good response from the global audience.

In The Name of Confucius has been shown 57 times in 12 countries.

Film maker Doris Liu said that the movie had been well received, with review ratings of 8.7 out of 10 on Internet Movie Database (IMDb) and 4.8 out of 5 on Facebook.

Rahul Bhattarai is a student journalist on the Postgraduate Diploma in Communication Studies (Journalism) reporting on the Asia-Pacific Journalism course at AUT University.