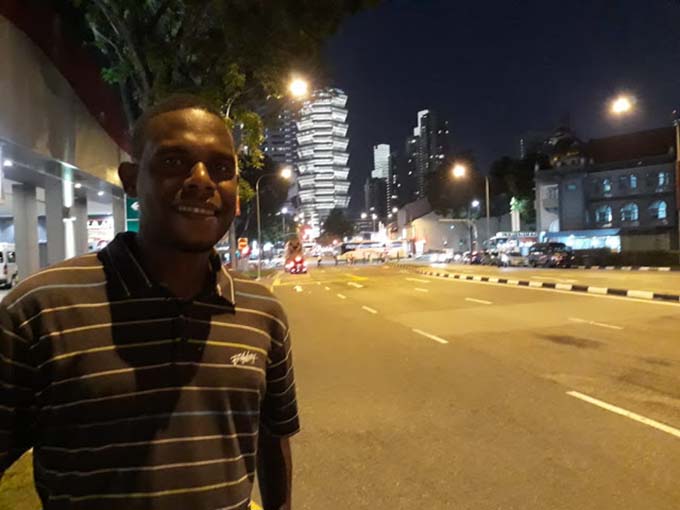 Silvester Gawi … “Our politicians should stop coming to Singapore for medical treatment alone, they should start focusing on making PNG become the next Singapore.” Image: Silvester Gawi

By Sylvester Gawi in Singapore

I hope you are reading this with ease and a positive mindset to help change the course of this beautiful country of ours – Papua New Guinea. My first time experience here has made me  raise questions about how our economy has been mismanaged over the last 40years.

I’ve come to know this place from reading books, magazines, watching videos, documentaries and even looking it up on the internet.

From the countless travel magazines in secondhand shops in Lae in the 1990s to the LCD screens of the most sophisticated smartphones accessed by almost all school age kids in PNG today, Singapore has literally changed in front of our eyes.

I read with much interest about how Singapore has transformed itself from a small island nation to become one of the most developed countries in the world.

Singapore’s rise to power
Singapore has a rich history of civilisation. It was once colonised by the British empire. During the Second World War it was invaded by the Japanese, and later taken over again by the British after the war when Japan surrendered to the Allies.

The failure of Britain to defend Singapore during the war forced the people to cry for merdeka, or self governance. It 1963, Singapore became part of Malaysia, ending  144 years of British rule on the island.

Since gaining independence from Malaysia on August 9, 1965, Singapore has since progressed on to be the host of one of the biggest and busiest air and sea ports in the world.

Lessons for PNG
Papua New Guinea has some of the world’s largest natural resource deposits in gold, copper, timber and now the Liquefied Natural Gas (LNG) or the PNG LNG Project which is worth US$19 billion.

Singapore’s GDP per capita continues to grow annually and it is now US$55,235.

Singapore has been able to made its way to becoming a developed country in just under 53 years of Independence. Its government subsidises housing, medical bills, education, public transport and so on, and increases economic opportunities for middle to low income earners.

It is an island country without any gold, copper, nickel mines, LNG project, organic coffee, timber or any other natural resources. It is a very strategic port of transition where goods and raw materials are brought here first then transported elsewhere across the world.

We also have the Lae port in PNG, which is one of the the most most strategic ports in the Southern Hemisphere. It is where cargoes from across the world transit into the Australia and even the Pacific.

The Lae port and the production line of businesses operating in Lae generates well over K111 million for the national government coffers annually as internal revenue. The Lae port serves as the only seaport that controls import of raw materials and exports of organic coffee, cocoa and other organic products for international markets.

Better roads, schools
We could have better roads being built, good schools, hospitals and life improving facilities for every tax payer in the city. Our SME sector should have fully flourished by now if we have the government putting its paper policy to work.

Squatter settlements and law and order won’t be major impediments for growth and development. People’s mindset would have changed and people’s movement in search for better service delivery would have been narrowed down.

Everyone here in Singapore respects each other despite their color, ethnicity and religion. There is no littering, loitering or even people sleeping on the streets. You will get caned by the police if you don’t dispose your rubbish in the right place.

The Singaporean government has made it its responsibility to ensure every citizen learns to appreciate and look after the environment. There are separate rubbish bins for biodegradable and non-biodegradable. No smoking in public or even spitting as you will be fined and dealt with accordingly.

All this boils down is a need to for a change in attitude in Papua New Guinea. If we change our attitude and start respecting each other and the environment we live in, we will create a good future for our children.

Since we don’t change ourselves, we have kept on voting self-centered individuals to represent our interest in Parliament for the last 40 years.

A politician once told me, he has plans and dreams to reclaim the beauty of the city he grew up in the early 70s. But he added that that dream would only be achievable if the people changed their mindset. Also one member of Parliament won’t make the change happen, it needs the majority to stand up for the people’s needs.

Last generation
“represent the last generation of Papua New Guinean kids who have used a kerosene lamp, a payphone, drank from a Coke bottle and listened to music on cassette players while growing up. We have anticipated so much to change for the better, but we are seeing it the other way around.

Life is getting tougher.

Our politicians should stop coming to Singapore for medical treatment alone, they should start focusing on making PNG become the next Singapore.

A wise man once said, if we continue to tell lies, it will surely become the truth. If the government can fool us for 40 years, they might continue to sell PNG’s resources for their own interest.

Sylvester Gawi is a Papua New Guinean journalist who blogs at Graun Blong Mi – My Land.