The situation in Gaza “is criminal and genocide”, says Injustice author Miko Peled in an interview about the latest Israeli bombing attack on Hamas positions in the Gaza Strip. Video: RT

Once again, a small number of individuals from several countries are trying to break the illegal siege imposed on the people of Gaza by sailing from Europe to Gaza on four small Scandinavian boats: Al Awda (The Return), Freedom, Falestine (Palestine) and Mairead (named for Nobel Peace Laureate Mairead Maguire)

But this year? After what’s been happening, the killing and maiming of unarmed marchers – 140 dead since March 30, including children, medics, journalists – by expert IDF snipers?

Why don’t they give up?

Who are the activists, where do they come from and why are they doing this? 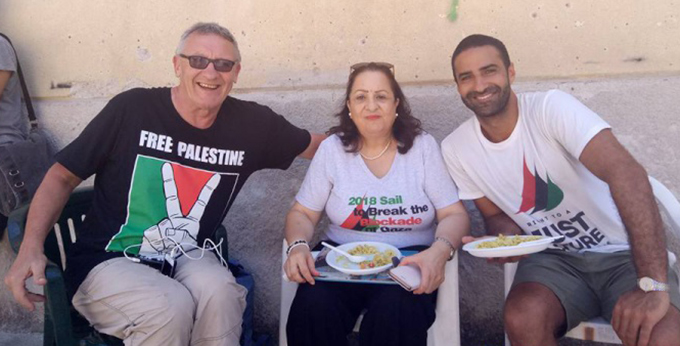 Two New Zealanders are on board the flotilla. Kiwi-Palestinian Youssef Sammour, an experienced sailor, has been with the flotilla for the entire long journey, beginning at Copenhagen.

He has sent many photos of the friendly welcomings they have received at ports along the way.

Unite Union organiser Mike Treen has joined the flotilla for the last leg, from Sicily to Gaza. Both Kiwis can be followed at the Kia ora Gaza website.

Does New Zealand genuinely have an independent foreign policy?

Challenge to NZ
If so, I challenge the New Zealand government to demand that Israel allow the Freedom Flotilla to enter Gaza.

The flotilla hopes to deliver basic medical supplies – gauzes and sutures – to Gaza where the doctors have been overwhelmed by the number of direct killings and serious woundings from skilled Israeli snipers.

The Freedom Flotilla is on a humanitarian mission. They pose no threat to Israelis. 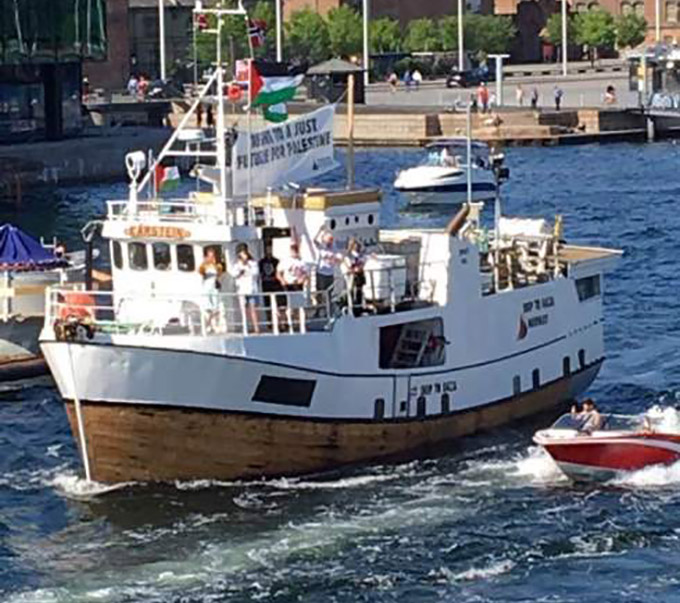 The Al Awda, one of the Gaza Peace Flotilla’s four boats. Mike Treen is on board for the final leg of her voyage to Gaza. Image: Kia Ora Gaza

At least three of the participants are Americans.

One of them, Joe Meadors, is a survivor of the 1967 Israeli deadly attack on the USS Liberty, that killed 34 American servicemen.

President Lyndon Johnson and his Defence Secretary, Robert McNamara, declared that the bombing was an “accident”. They refused to conduct an inquiry but the survivors have never forgotten what they believe really happened.

Meadors is a past president of USS Liberty Veterans Association, founded in 1982. In a Common Dreams interview on July 12, Joe Meadors said,

“This trip is happening right after the protests called the Great March of Return, when so many people in Gaza were killed and wounded because they were demanding the right to return to the villages they were forced to flee in 1948.

“The Great March of Return is part of a 70-year struggle for the Palestinians’ right to live in the ancestral lands their families left behind.”…

“I want to show the people of Gaza that we care, that we are willing to put our lives on the line for them. We are willing to face the risks that they face every day. I hope we make it to Gaza but even if we don’t, our effort will inspire the people there and help bring world attention to their cause.”

Ex-CIA analyst
Elizabeth Murray is a retired CIA analyst. She specialised in Middle Eastern political and media analysis. She is a member of Veteran Intelligence Professionals for Sanity (VIPS). Writing in Consortium News on May 22, Elizabeth Murray explains:

“I feel proud and privileged to join a group of international passengers aboard the Norwegian ship Al Awda.

“Along our route we hope to raise awareness and educate people about the plight of Palestinians, especially in Gaza, who are denied the basic freedoms and human rights the rest of us take for granted.

“As the Freedom Flotilla embarks on its peace odyssey, it is our hope to bring a light of hope and solidarity to the people of Gaza, who deserve the peaceful, dignified and joyful existence that is their right.”

Ann Wright is a retired US Army colonel and diplomat. She received the State Department Award for Heroism in 1997, after helping to evacuate several thousand people during the civil war in Sierra Leone. She is one of three State Department officials who publicly resigned in direct protest against the 2003 invasion of Iraq.

“As a US citizen, I must challenge my own government’s complicity in the horrific conditions imposed on Palestinians by Israel,” she said. 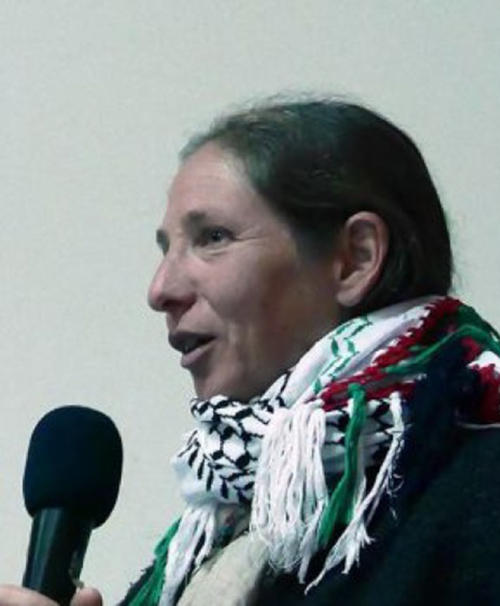 Canadian activist Ron Rousseau from Yukon … “as an Indigenous activist … we feel that it’s necessary to be defending Palestine.” Image: Scoop

“You know, as an Indigenous activist, as you know, it is, we feel that it’s necessary to be defending and making people aware of what’s actually happening inside of Palestine, and the people that live there, and how they are under siege.

“As we look at our history, you know, we were some 200 million in North America. And you know, our people were slaughtered.

“Our people were, had bounties on us, and even up to the point of where they were moved onto reservations where we needed a pass system to leave the reservation, even to go off for medical, you needed to ask permission to leave.

“So we were inside like a landlocked jail as well, up until the ’50s.”

Ron Rousseau explained that he learned about Palestine  through union activities.

“The first article I read was probably 10 years ago. It was a full bulletin put out to all members that went out to every postal worker in Canada, and then I went to an intensive four-week education for unionism, and we spent the whole day talking about Palestine.

“And I was, I was shocked, and I couldn’t take it off my mind, and been following it all the way along and making sure that people understood what was going on with family, friends, and everybody I talked to.”

Israeli participant
At least one Israeli is taking part. Zohar Chamberlain Regev is an Israeli citizen (born and raised in Kibbutz Kfar Hahoresh, near Nazareth) who has lived in Spain for the last 14 years. When asked why she was taking part, she replied,

“As a human being first of all, but also as an Israeli of Jewish origin, I am appalled by what is being done by Israel in Palestine in general and in Gaza in particular. We have always been told ‘how could the world be silent during the Holocaust’, now we know how…we have to stand by our Palestinian sisters and brothers in Gaza to save our own humanity.

“As an amputee, I can only begin to imagine what it is like for people in Gaza who have lost their limbs in the brutal attacks and are still waiting to be fitted with prosthetic limbs, as one of the many consequences of the illegal Israeli blockade.”

Malaysian Dr Fauziah Mohd Hasan is a consultant obstetrician and gynaecologist at a hospital in Kuala Lumpur, Malaysia. She has received international recognition for her medical humanitarian work in many countries including Kosovo, the Moluccas islands, Acheh Indonesia, Afghanistan, Gaza, Syria and Bangladesh.

Before departing to take part in the 2016 Women’s Boat to Gaza, Dr Hasan explained,

“My participation is not in my individual capacity but representing my family, my women folks, my nation and all Muslims and humanity the world over.

“This humanitarian mission involves women only, just to show that there is a united voice in ending the blockade of Gaza, beyond gender, race, religion and geographical boundaries. It is purely a humanitarian mission to ensure freedom is given to all, for as Nelson Mandela once said:

‘We know too well that our freedom is incomplete without the freedom of the Palestinians.”

“To the people of Gaza, you are always in our prayers.”

Every participant – the Scandinavians, the two MPs, from Spain and Algeria – has a story to tell.

I’ve chosen the ones I thought would be most interesting to New Zealand readers.

Someone should write a book someday, about all the participants in all of the attempts to reach Gaza by sea, since the siege was imposed.

It’s inspiring to learn of humanitarian people from many parts of the world. Some efforts to reach Gaza have been successful. 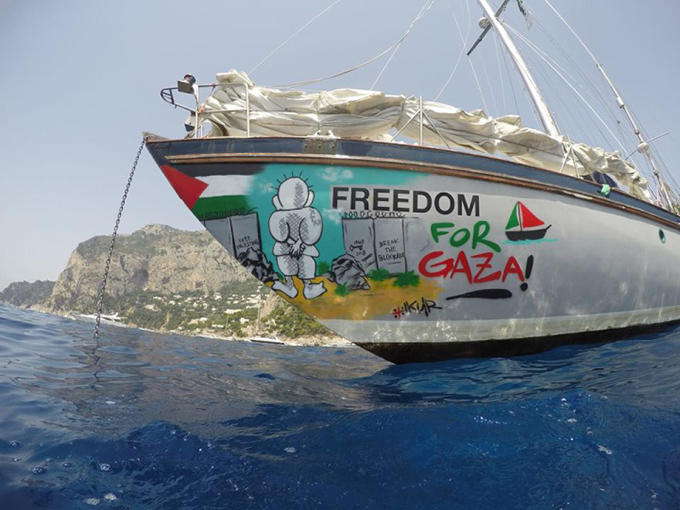 History is not cowardly governments

with their loyalty to whoever has the strongest military

History is made by ordinary people

everyday people, with family at home and a reular job

who are committed to peace as a grat ideal

to the rights of all to staying human.

History is us who risked our lives

to bring utopia within reach

to offer a dream, a hope, to hundreds of thosands of people

Who cried with us as we reached the port of Gaza

Our message of peace is a call to action

not to hand over your lives

to whatever puppeteer is in charge this time round

But to take responsibility for the revolution

to give love , to give empathy

It is this that will change the world.

We have shown that peace is not an impossible utopia

Or perhaps we shown that sometimes

utopia can be possible

Lois Griffiths is reporting for Scoop Independent News on the Freedom Flotilla. Other flotilla articles and images are at Kia Ora Gaza. Asia Pacific Report is sharing coverage with Kia Ora Gaza and Scoop.

The Good Fight: exhilarating entertainment and a grim warning of what the US could become

Linda Evangelista says fat freezing made her a recluse. Cryolipolysis can do the opposite to what’s promised