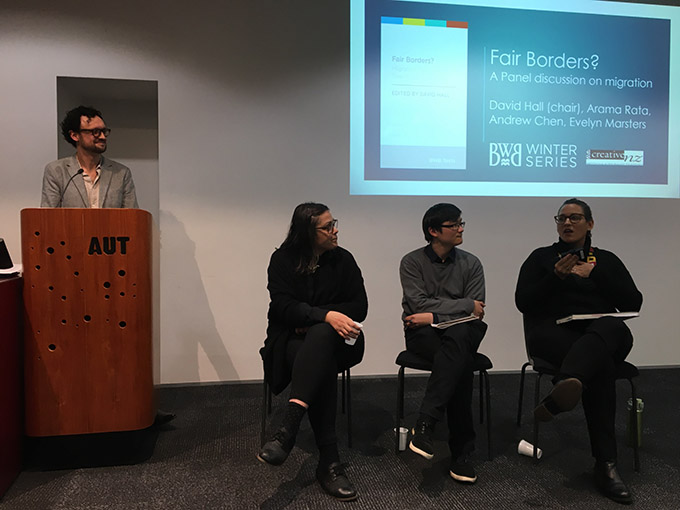 Speaking at a panel discussion at Auckland University of Technology last night, Dr Hall, editor of the book Fair Borders: Migration Policy in the 21st Century, said harm and hurt from such rhetoric created side effects impacting on migrants.

Negativity directed towards home buyers with Chinese sounding surnames diverted attention from “long lines of people with British sounding surnames” that held and continued to hold powerful and influential positions over the housing issue.

Although there is an ethnic dimension to housing crises, he said that the most significant issue was that “Pākehā leaders supported by electorates with Pākehā majorities [were] failing to take action.”

Dr Hall, senior researcher of AUT’s Policy Observatory, was joined by three of the book’s contributors, Andrew Chen, Dr Arama Rata and Dr Evelyn Masters, to discuss how New Zealand’s borders impacted on its citizens, recent immigrants, and on people barred from the country.

He pointed out that one continuous theme was the failure of successful decision makers to make the tough decision that might have made a difference, such as the mayors of Auckland going back to the 1990s or the housing ministers.

“There is bit of pattern here,” he said.

‘Tricky’ issues
Dr Hall said that house prices had been rising since 1990s and only eight years ago there were more people leaving the country than were arriving, yet the house prices rose during the negative migration period.

The issue was “very tricky” with some of the genuine social strains such as housing affordability and policy and its relationship to migration.

The debate treated “immigration as an economic medicine that might taste a little bad and people just need to put up with which also doesn’t do anything to address peoples’ genuine worries”.

Dr Arama Rata, a research officer at the University of Waikato, said that in New Zealand there was a border in place which was established by the invaders.

Māori border ignored
But the “Māori border has been ignored, a new imposition of state authority is being imposed, borders have been closed around the nation state to allow certain desirable white migrants in and to exclude others, and now we have a very secure racist structure in place”.

She said borders needed to be in place but, “it should be controlled more by our values rather than just purely economic incentives and the way I think we need to stop framing immigration as a problem”.

Dr Evelyn Masters, with Pākehā lineage and Cook Islands heritage that she is really proud of, said she struggled in explaining her New Zealand identity because people judged her based on her appearance.

Dr Masters, research manager of NZ Institute for Pacific Research, said people struggled to understand that she had multiple lineage in her blood line and wanted to be known as a New Zealander.

She did not have to be just one race because she looked brown, she said.

“I just want to say that I am a New Zealander, because my experience is I am multiple – I have brown people and white people in my family, why do I have to be just one as you see me.”