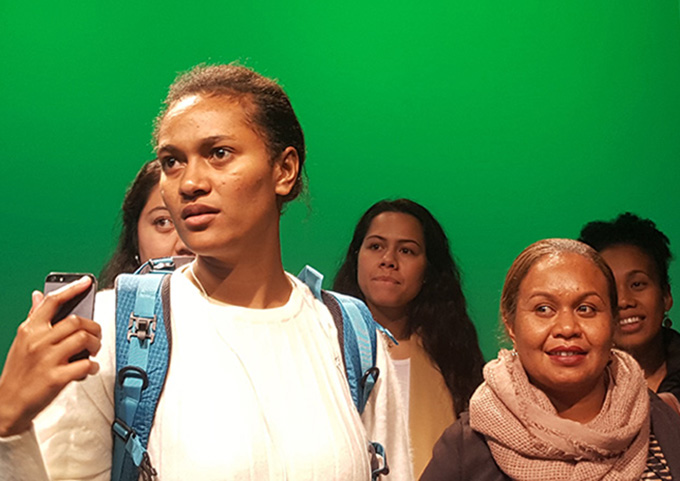 Adi Anaesini Civavonovono of Fiji (left) and Elizabeth Osifelo of the Solomon Islands (both of the University of the South Pacific) against the green screen in the television studios during their visit to Auckland University of Technology this week. Behind them are the Pacific Cooperation Foundation’s Suzanne Suisuiki (partially hidden) along with AUT students Leilani Sitagata and Pauline Mago-King. Image: Del Abcede/PMC

It was a case of Pacific meets Pacific in AUT’s School of Communication Studies this week as one of the inaugural winners of the Pacific Cooperation Foundation internships welcomed this year’s new batch of four student journalists from Fiji, Samoa and Solomon Islands.

Pauline Mago-King of Papua New Guinea was a final year communication studies student in Madang when the internships began and she visited New Zealand in 2015 thanks to PCF.

Now she is a master’s degree student at Auckland University of Technology doing research into domestic violence and non-government organisation responses in her home country.

She says she knew the flexibility of the AUT programme was just right for her – “especially when you come from a country where there aren’t enough opportunities for a student to gain experience.”

AUT’s Pacific Media Centre hosted the PCF internship students and director Professor David Robie welcomed them, saying “we‘re just a small programme but with quite a reach, we have an audience of up to 20,000 on our Asia Pacific Report website”.

The PMC, with a small part-time team, covers the region with independent news as well as conducting out a discrete media research programme.

Three of the students on the two-week internship in New Zealand come from the University of the South Pacific and the student newspaper Wansolwara – Elizabeth Osifelo (Solomon Islands), Salote Qalubau and Adi Anaesini Civavonovono (both from Fiji). The fourth, Yumi Talaave, is from the National University of Samoa. 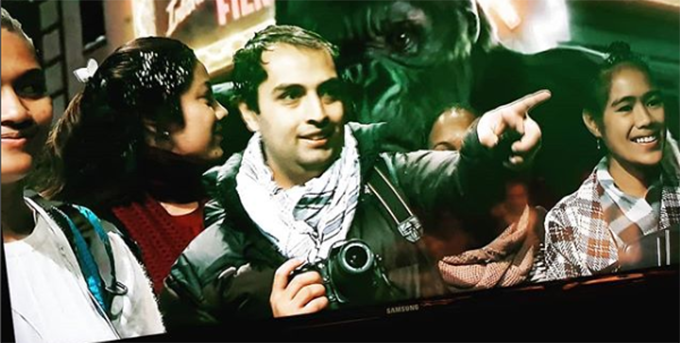 They then visited AUT’s journalism newsroom and media centre.

Hele Ikimotu and Blessen Tom travelled to Rabi Island in the north of Fiji in April and filmed the documentary Banabans of Rabi: A Story of Survival in the hope of spreading awareness about the impact of climate change in the Pacific.

Their lecturers, Jim Marbrook and David Robie, hope to enter the documentary into film festivals and an earlier video by the students as part of the project gives a glimpse of life on the island.

Suzanne Suisuiki, communications manager of PCF, says these kinds of internships provide the opportunity for Pacific students to gain wider exposure and better understanding of media.

“We wanted interns who had a sense of appreciation of the media industry,” she said.

She plans to next year expand to the wider Pacific region, including Tonga and Papua New Guinea.

Two students were also selected from New Zealand to go to Fiji and Samoa.