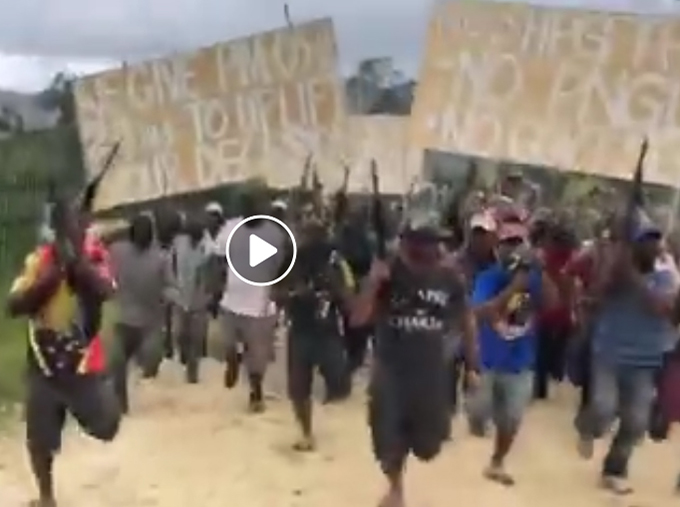 More than 100 Papua New Guinea soldiers from Taurama Barracks First Royal Pacific Islands Regiment arrived in the Southern Highlands capital of Mendi at the weekend for the state of emergency operation which takes force from today.

Political leaders from the Southern Highlands – including Prime Minister Peter O’Neill, who is from the province – apologised to the nation for the “distress” caused by rioting and destruction of state property last week, reports the PNG Post-Courier.

Video clips circulating in PNG social media at the weekend show armed Southern Highlanders, some with assault rifles, challenging the government and threatening the massive PNG liquefied gas pipeline project in the province.

Some protest placards say “No SHPG then * no PNGLN *no Govt servc”, referring to the suspension of the Southern Highlands provincial government and the appointment by Port Moresby of an acting provincial administrator.

A 24-hour deadline was given by the protesters but it was unclear what their demands were or when the deadline would expire.

Prime Minister Peter O’Neill and leaders of the Southern Highlands province, including election petitioners for the governor’s seat, apologised over the distress, upheaval and destruction of state property in last week’s rioting.

Petitioner Joe Kobol met with Prime Minister O’Neill and Southern Highlands leaders with Enga Governor Peter Ipatas and other stakeholders of the province to apologise to the nation and iron out all issues surrounding the recent events.

‘Normalcy’ being restored
O’Neill told the Post-Courier in an interview that “normalcy” was now being restored, saying that all leaders had agreed that an independent provincial administrator would be appointed to maintain balance and independence of the operation of the province.

“All the leaders of Southern Highlands have met, including Joe Kobol and Pastor Bernard, who also contested the governor’s seat, and we have discussed issues that have caused the burning of state properties because of a court decision last week,” he said.

“Normalcy is being restored in the province and today we want to apologise to Papua New Guinea for the recent events that had taken place, mainly out of frustration,” he said.

“The leaders and I want to express and apologise for the distress caused. Our country has always enjoyed the peaceful resolution of the leaders.

The prime minister added that all the leaders had agreed for Thomas Eluh to be SOE Controller and that an emergency committee of Parliament would be convened immediately to assess the situation on the administration and the rule of law and order.

Mobile squad reinforcements
The Post-Courier’s Johnny Poiya reports that a number of Highlands-based police mobile squad groups and soldiers are also in Mendi town strengthening the number of security forces for the operation.

SOE controller Thomas Eluh is expected to arrive from Port Moresby today to the town where he left couple of months ago when he was removed as acting provincial administrator.