A near confrontation on the floor of Parliament on Friday, with the Papua New Guinea Opposition walking out in protest over the referral of Madang MP Bryan Kramer, to the Parliamentary Privileges Committee following a Facebook posting. Video: EMTV News

OPINION: By Keith Jackson in Noosa

Samuel H Basil, the man who might ban Papua New Guineans from Facebook, was not always such a stern opponent of the social media platform he now despises – a platform used by nearly a million of his fellow citizens.

Indeed it was only 18 months ago that Basil – who is now Communications Minister – posted on his own Facebook page: “FB users in PNG have used the medium to their advantage exposing corruption in government…. Everything is changing; people are taking their bloggers seriously and their politicians as comedians.”

READ MORE: Gary Juffa on the Kramer censoring – another attack on free speech

Then last week, having defected not only from his political base but seemingly from his former progressive and liberal ideas, Basil felt able to announce that Facebook could be banned for a month for some mysterious “research” – and maybe disposed of permanently, perhaps to be replaced by Basbook. 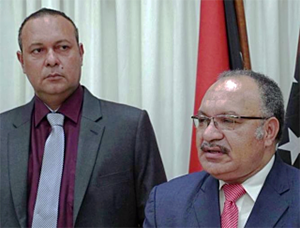 An immediate worldwide flambé of curiosity then thrust the story into the news stratosphere, some journalists linking it with Papua New Guinea’s APEC forum later this year. Basil seemed to back away, then push the idea forward again so by week’s end what the government intends to do was very much up in the air.

But one thing did remain constant (see more stories on PNG Attitude) – the desire of most national politicians to get rid of the dreadful FB thing that is causing them so much grief with increasingly savvy and critical voters.

Among the small group of politicians fighting to keep Facebook alive is Madang MP Bryan Kramer who was cheeky enough (in a Facebook post of course) to allude to Basil in a headline which asked, “Did dumb just get dumber?”.

Parliamentary walkout
Affecting to have been taken aback, in Parliament the majority of members voted to refer Kramer to the Privileges Committee whereupon Opposition Leader Patrick Pruaitch and 23 other members walked out of the chamber in protest.

The committee will decide if Kramer’s post brought Parliament into disrepute. 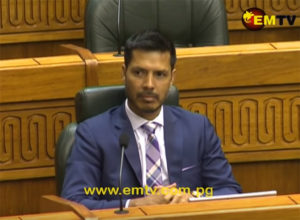 However, there is something of a problem – the committee is meant to investigate breaches of parliamentary privilege and Kramer’s statement was not made in Parliament.

“I think what is frightening and what is alarming for the people of PNG is a deliberate move towards shutting down their opportunities to have access to information and to also speak freely,” Pruaitch said.

“They [politicians] are complaining about their feelings being hurt.”

Meanwhile, in far away Uganda, Parliament has just passed a new social media tax which will charge a daily fee of 200 Ugandan shillings (about K1.75) to anyone using apps Facebook, WhatsApp and Twitter. That’s a hefty sum in a country where the average person earns K6 a day.

But, as with Sam Basil’s ill thought through proposition for Papua New Guinea, it is unclear in Uganda how social media use will be monitored and how the money will be collected.

Digging themselves deeper holes in their desire to rein in social media seems to be a developing political trait.

This article is republished by Asia Pacific Report with permission and was originally published by Keith Jackson’s blog PNG Attitude.