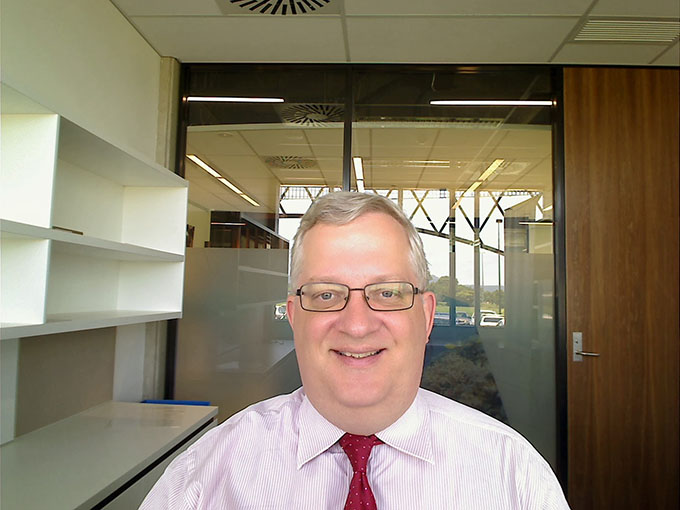 Dr Albert Schram … his Netherlands passport was returned last week and he now says he will not go back to PNG to face trial with no guarantee of justice. Image: Dr Schram’s blog

By Keith Jackson in Noosa

In a shock development in Papua New Guinea’s Schram case, the former vice-chancellor of the PNG University of Technology has said he will not return to Papua New Guinea “until major changes occur in the country”.

Dr Schram said he has been the subject of a “political prosecution” and will forego bail rather than return to an uncertain legal future in PNG.

“[We entered] a parallel world where lies are truth and all people are blind, deaf and mute,” he wrote in Facebook of the charge of “false pretence” he is facing.

“In this world, you are completely alone because there is no point in trying to have a reasonable conversation with anyone. A truly terrifying world, but the truth will set us free.” 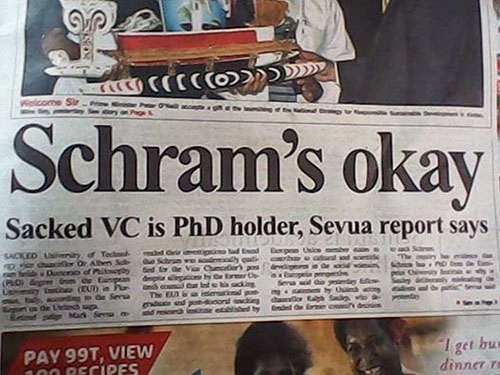 But Dr Schram said he will still go through “the costly process” of getting his original doctorate legalised and send it through diplomatic channels to the committal court in Waigani.

“This should clear all charges for ever,” he said.

Last Tuesday, against the wishes of police prosecutor Kila Tali, national court judge Panuel Mogish had varied Dr Schram’s bail conditions and ordered his passport be returned to enable him to travel to Italy to obtain the credentials which would have been prime evidence in a court hearing on a charge that Dr Schram engaged in “false pretence”.

Left at weekend
Dr Schram and his wife Paulina left Papua New Guinea on Saturday ostensibly to retrieve the doctoral qualifications from the European University Institute in Florence.

“We got out,” Dr Schram emailed me from Singapore yesterday, “probably not able to come back until major changes occur in the country.”

“In his judgement on May 22 on the bail conditions, the judge in the national court was deliberately explicit on the substantive case,” Dr Schram has written on his Facebook page.

“There is not a shred of primary evidence suggesting I have falsified anything, while there is overwhelming evidence that in fact my doctorate is genuine,” he said.

“Finally an independent judge has said what anyone with common sense could have concluded since the complaints were made in 2012.”

Dr Schram quoted Justice Mogish as writing in his judgement:

“In spite of this overwhelming evidence (presented by Dr Schram) Mr [Ralph] Saulep continues to dispute the authenticity of the applicant’s doctorate degree. I find this ridiculous and difficult to fathom especially when neither he or the police are in receipt of evidence from the European University Institute in Florence Italy, confirming their allegations and suspicions”.

“The current charge, with respect, lacks the primary evidence to prove the elements of falsity. Whether they will have such evidence by the 12 June 2018 (the next hearing) is anyone’s guess. The reality is that they have failed to do so when the allegations were raised in 2012.”

“All this is of course is damaging for police and the complainant – former pro chancellor Ralph Saulep….. Since the conditions for the settlement with the [current Unitech] Council, which included no criminal prosecution, have now been violated, I do not consider myself bound to this agreement.

“In any case, for justice to prevail and the people of PNG to be liberated from police abuse, I must describe the facts.”

Dr Schram said he and his wife Paulina “did not come to [PNG] to get rich but neither did we expect the financial ruin we are facing now.

“The legal fight with the [Unitech] Council for wrongful dismissal first and now the fight for my malicious prosecution by the police has drained all of our resources.”

He said he missed two job interviews because of his arrest and, when the charges are cleared, he will claim damages for “all the financial losses, opportunity costs and defamation of character I suffered”.

Dr Schram also said a parliamentary inquiry was warranted into police abuse in his case.

“Like for all of us academics, journalists and other knowledge workers who cannot return to the country, it makes us sad that until amends are made and the police have been restructured and [brought] under control, we will not be able to see our friends and our new and beloved family in PNG.”

When varying the bail conditions last week, Justice Mogish said it would be academic and career suicide for Dr Schram to abscond from bail and not return to PNG.

“I do not think any reasonable man would just walk away leaving a trail of serious allegations unanswered,” he said.

“His standing in the academic world would be seriously affected.”

Whether or not the judge’s words will be borne out, time will tell.

But it does seem that, given these dramatic circumstances, Dr Schram’s hopes for vindication are unlikely to be realised.

They had found themselves is a totally powerless position on what appeared to be a trumped up charge in a country where they doubted the politics surrounding their predicament would allow justice to prevail no matter what the court decided.

This has emerged as something of a cautionary tale for outsiders who sail too close to Papua New Guinea’s political winds.

Keith Jackson is a retired journalist, broadcaster, administrator and media educator and has held senior positions in Australia and Papua New Guinea. This article was first published on his blog PNG Attitude and is republished by Asia Pacific Report with permission.