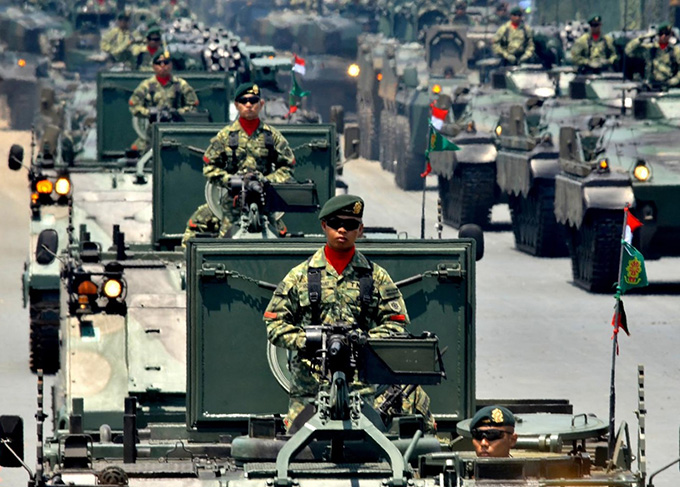 By Marguerite Afra Sapiie and Nurul Fitri Ramadhani in Jakarta

The team, which included and will again include personnel of the Army’s Special Forces (Kopassus), the Navy’s Denjaka squad and the Air Force’s Bravo 90 special force, would be put on standby and be ready to be mobilised at any time when terror threats emerged, Moeldoko said.

“This joint force was well trained and prepared in terms of its capacity, and it could be deployed anywhere on the country’s soil as fast as possible […]. Its role would be to assist the National Police,” Moeldoko said.

His statement has followed a recent string of terrorist attacks that has thrust Indonesia into a state of paranoia.

The joint force was first established under Moeldoko when he served as the Indonesian Military (TNI) commander in 2015. The special command’s operations, however, were suspended under the leadership of Moeldoko’s successor, retired General Gatot Nurmantyo.

Further tasks of the special command would be discussed between TNI commander Air Chief Marshal Hadi Tjahjanto and National Police chief General Tito Karnavian, with the latter to have the final say on whether it needed the assistance of the TNI’s special team or not, Moeldoko said.

“This operation must be carried out for preventive purposes, so that the public can feel safe […]. We [the security apparatus] are ready to face any kind of situation, so people should put their trust in us and not worry,” he said.

Planned amendment
The revitalisation of the joint force did not require any new regulations, Moeldoko said, adding that the details about the command’s tasks would be adjusted with the planned amendment to the 2003 Terrorism Law.

The announcement came as the House of Representatives and the government began to clear up contentious articles that had caused deadlock in the deliberation of the Terrorism Law revision, including the legal definition of terrorism and the military’s level of involvement in counterterrorism operations.

A greater level of involvement has stirred debate among experts and human rights activists.

Seven ruling parties and the government had agreed on a definition of terrorism that included acts that had “political and ideological motives and threaten national security”, United Development Party (PPP) lawmaker Arsul Sani said.

More leeway
It is widely believed that such a definition would provide leeway for greater involvement of the TNI in counterterrorism efforts.

As the government and the lawmakers appear to be on the same page now, observers expect the bill to be passed into law in the near future.

Jokowi has recently said he would issue a regulation in lieu of law (Perppu) on the Terrorism Law if the House failed to conclude deliberations on the bill by June.

Members of a committee tasked with deliberating the bill said it was the leading opposition Gerindra Party and the Democratic Party, both political parties with strong military influence, that had demanded the inclusion of the contentious provisions.

“We support [the terrorism bill],” Gerindra chairman Prabowo Subianto said during his visit to the House.

Deliberation of the bill is believed to have been stalled mainly because of a tug-of-war between the TNI and the police, which led to division among political parties factions into pro-TNI and pro-police camps.