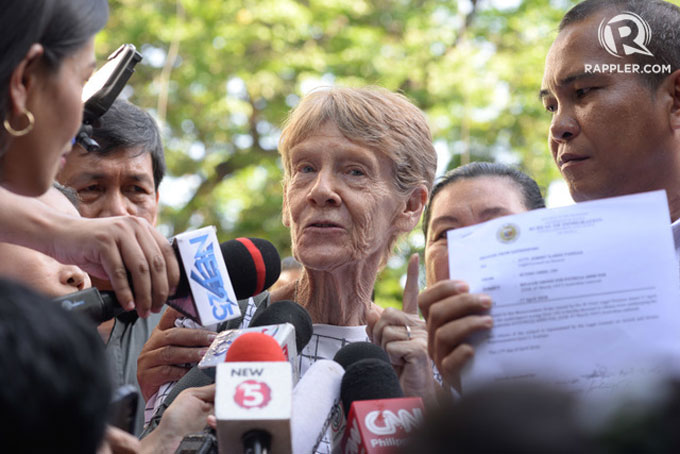 Sister “Pat” Fox … “her duty to protect anyone who was oppressed or poor.” Image: Rappler

Peter Murphy, chair of the International Coalition for Human Rights in the Philippines (ICHRP), told Pacific Media Watch today it was a “great relief” that Sister Pat had been released by the Philippines Bureau of Immigration on Tuesday.

According to a media release by ICHRP, 71-year-old Fox is a member of the Catholic congregation Sisters of Our lady of Sion, an Australian citizen who holds a missionary visa to work in the Philippines, where she has worked since 1991.

She now works with the Union of Agricultural Workers (UMA) and Alliance for Genuine Agrarian Reform (PATRIA), and is a past national coordinator of Rural Missionaries of the Philippines.

Murphy said he read in Philippines news media that Sister Fox had been due to be imprisoned in Taguig in the city of Manila but authorities thought it would be too harsh for her.

“So they let her sleep on an office bench in the Bureau of Immigration and she had some company,” said Murphy.

Murphy said while the Bureau of Immigration had released Fox, it was holding her passport while continuing to investigate her.

“They say the reason for releasing her is that when the Bureau of Immigration officers met her, she wasn’t breaking any laws.”

‘Megalomaniac statement’
“They met her in her house so it was a sort of face saving statement.”

“They aren’t going to proceed with the political charges they started with I think because there was such a big outcry from Australia, church and human rights groups in the Philippines.”

“Yesterday evening [President Rodrigo] Duterte said it was he who [had] personally ordered her detention. He said he had the power to do this and decide who was a suitable foreigner to be in the country and who wasn’t, which is sort of a megalomaniac statement.”

Murphy said he believed the president did not have this power but “it shows the attitude and how vindictive he can be when he is as arrogant and authoritarian as he is”.

“After Sister Fox was arrested, Duterte announced that if the prosecutor for the International Criminal Court came to investigate him, they would also be deported.”

The week before, Murphy said another priest tried to enter on a similar mission to Fox and he was deported.

“It’s part of a significant escalation of attempts to shut down outsiders making comments.”

Duterte’s ‘terrorist list’
Murphy said that Duterte had an increasing number on his list of alleged terrorists, including the expert at the UN for indigenous peoples’ rights.

Filipino Victoria Tauli-Corpuz, Special Rapporteur on the Rights of Indigenous Peoples, visited Australia recently and made some damning statements about the treatment of indigenous peoples under Dutuerte, said Murphy.

“It’s another case of him trying to shut up an international voice that’s critical of him.”

Murphy believes Duterte’s actions are part of a plan to seize greater control over the Philippines.

“I think what’s going on behind that as a strategy is to separate out the international networks that are supportive of trade unions, farmers organisations women’s groups, fisher folk…all of these people’s organisations in the Philippines have their international connections so he’s trying to put a barrier between the two and so have a freer hand to engage in more repression,” said Murphy.

‘No national boundaries’
In response to Durterte’s comments that Fox should criticise her own government instead of the Philippines, Murphy doesn’t think Fox has held back from condemning the Australian government.

“I don’t think Fox has had any inhibitions about criticising the Australian government either.

“President Duterte can’t say anyone else in the world outside of his borders is not entitled to comment on what’s happening to Human Rights in the Philippines.”

Rappler reports the Bureau of Immigration released Fox on Tuesday after keeping her in detention for almost a day. She was released because the bureau found she had a valid missionary visa and because she was not violating immigration laws.

Duterte said he ordered only an investigation into Fox’s “disorderly conduct,” not her detention.

Fox is expected to undergo preliminary investigation to determine if she is to be deported.

According to Rappler, the bureau had said that Fox was accused of “engaging in political activities and anti-government demonstrations”.

Fox said she had been active in standing up for human rights issues because of her religious beliefs, not because of any political leanings.

“I haven’t joined political rallies in terms of party politics, but I have been active in human rights issues,” the nun said.