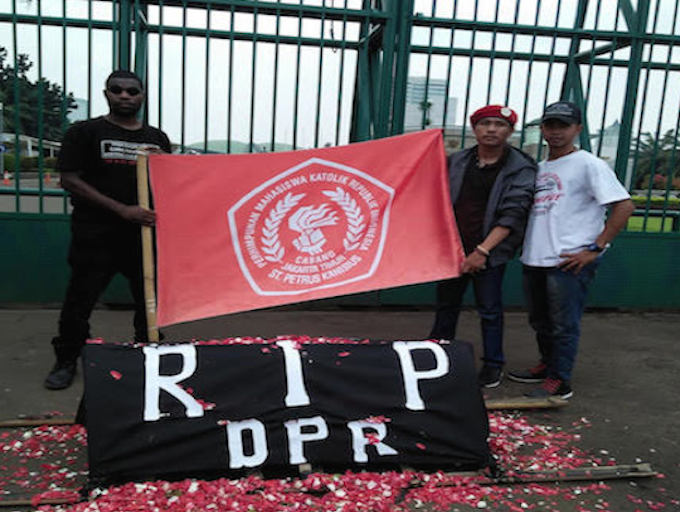 Members of the Indonesia Catholic Students Association (PMKRI) place a freedom of speech coffin in front of the Parliament building during a protest in Manila last week. Image: Gun Halilintar/PMKRI

By Ryan Dagur in Jakarta

A wave of protests has swept Indonesia in recent days after legislation criminalising criticism of lawmakers took effect last week.

President Joko Widodo has also come under fire for not taking decisive action against the law, labeled by many as a threat to democracy.

The new law follows a string of others in Southeast Asia criminalising criticism of monarchs and legislators — notably in Thailand and Cambodia — further curbing freedom of speech.

A number of Indonesian rights groups have filed for a judicial review in the Constitutional Court against the law.

The law says Parliament’s Ethics Council can take legal action against individuals, groups or legal entities that “disrespect the dignity” of lawmakers and Parliament as an institution. It also can order police to forcibly summon individuals for questioning.

An online petition at Change.org supported by a coalition of civil society groups, including Indonesia Corruption Watch, the Legislative Monitoring Committee and the Association for Election and Democracy has received significant backing.

Hendrik Rosdinar, coordinator of the civil society coalition said the law is “a disaster for Indonesian citizens,” because “anyone who criticizes parliament will have to prepare for a prison sentence.”

A large number of other groups have called for judicial review, including Forum of Law and Constitutional Studies, Indonesian Solidarity Party and students from the University of Indonesia.

“Parliament members have acted against the constitution and the principle of equality before the law,” she told ucanews.com.

Criticism of Widodo
Amid the outcry since Parliament passed the bill on February 13, Widodo has expressed concerns about the legislation.

He also did not sign the law. But the president’s hands were largely tied as once a law is passed by Parliament, he does not have the power of veto and, without his signature, it automatically goes into effect after 30 days.

Widodo told reporters on Monday that he would back a judicial review of the law.

However, he has come under fire from rights activists who condemned him for not spotting what the law would entail during the drafting and revision process.

He was also criticised for not introducing legislation correcting a number of controversial articles in the law.

“His is an ambiguous attitude, as he said he did not want to sign it [the law] because of public opposition to it, but at the same time he does not want to find a way out of this,” said Donal Fariz, coordinator of Indonesia Corruption Watch.

He said Widodo had thrown that responsibility to society.

“Society has to fix the mistake that has been made by parliament and the government,” Fariz said.

Grattan on Friday: Morrison’s promised integrity commission can’t hide behind COVID much longer – can it?

Gaming the board: Crown Resorts shows you just can’t bet on...

E-prescriptions are coming. But what are they? And is this the...

How do we know statistics can be trusted? We talked to...