Al Jazeera’s Step Vaessen was given exclusive access to report on the measles outbreak from Asatat, in Indonesia’s Papua province.

The commission has blamed the Indonesian government “for this considerable loss of life”.

“The current efforts to address the problem are simply too little, too late,” it said in a statement from Hongkong.

So far, 68 children have died from measles and serious malnutrition in Asmat.

“Being the most remote areas of Asmat regency, victims in these districts have faced serious difficulties in obtaining access to medical facilities,” the AHRC statement said.

“Even in the regency’s capital, Agats, the Agats General Hospital (RSUD) is not equipped to deal with all the patients of measles and malnutrition.”

Patients in church
A category D hospital with limited facilities, paramedics and doctors, the hospital at present needed more medicine due to limited stock, and due to limited space, some patients have been hospitalised in the nearest church building, the AHRC statement said.

This circumstance showed how Papua had been left behind in terms of health facilities, infrastructure and development.

In Jakarta, Java island or other islands such as Sumatra and Bali, there were numerous public and private hospitals of type B and A, easy to access, the statement said.

Papua mostly has public hospitals of type D, especially in remote areas. There is a category A hospital in Jayapura city, the capital of Papua, but it is quite far from Agats and to reach Jayapura from Agats is not easy due to the lack of infrastructure.

“This situation clearly highlights how neither the central government of Indonesia in Jakarta, nor the local government in Papua province and Asmat regency have been able to develop an early warning system to prevent measles and malnutrition.” 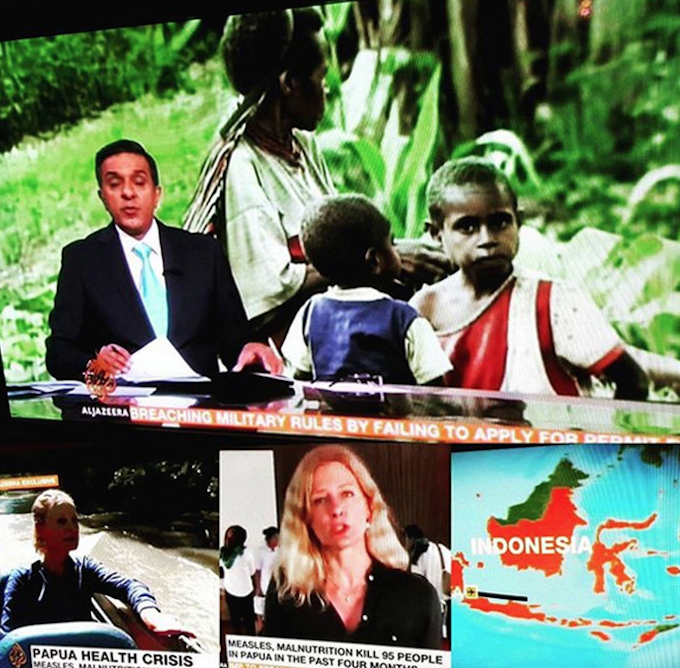 Screen shots from an Al Jazeera report by Step Vaessen on the measles outbreak in Papua. Image: PMC

The AHRC said it was concerned that the epidemic could easily spread to other places in Papua, particularly in remote areas lacking in health facilities.

Since Papua was integrated into the Republic of Indonesia in 1969, Papua has remained the poorest and least developed province.

Citizens’ rights
As a state party to the International Covenant on Economic, Social and Cultural Rights, Indonesia was obligated to:

Similarly, national laws such as Law No. 36 of 2009 guaranteed the right to equal health access for all citizens, the AHRC said.

The commission said it viewed the current lack of health access and facilities in Papua – and the deaths of 68 children – as a clear violation of the Indonesian government’s responsibility towards its citizens.

“By not developing equal health care in Papua, the government is to blame for this considerable loss of life. The current efforts to address the problem are simply too little, too late,” the statement said.

The AHRC said the government should immediately announce a health emergency in Papua and open access for medical aid, including international medical support. It should also allow access to the media to ensure accountability and to monitor the eradication of the epidemic.

Priority for Papua
The assistance from the central government should not merely be limited to eradicating disease in Asmat regency, but should ensure that remote areas in Papua received priority in development of health access, facilities and infrastructure, the statement said.

The National Commission on Human Rights (Komnas HAM), the Minister of Health and Ombudsman of Republic of Indonesia, the House of Representatives, in particular Commission IX which concerns health, food and medicines, should take initiatives to monitor, evaluate and ensure the implementation of such policies, the AHRC said.

Local government should also open access for NGOs and media to monitor the recovery and development in remote areas.

The AHRC also urged the government to comprehensively ensure that all children, including pregnant mothers in Papua, particularly in Asmat regency, were given enough nutrition, food, and vaccines to prevent disease.