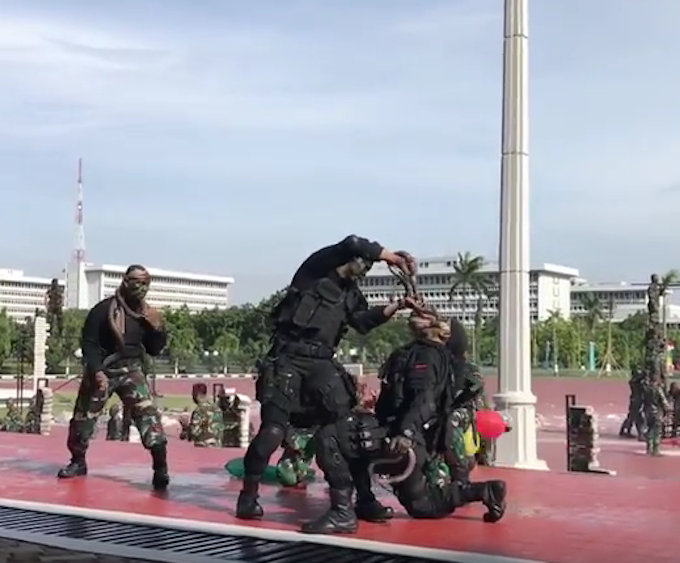 The demonstration came at the end of a three-day visit to Indonesia this week that was part of Mattis’s Southeast Asian tour.

His next stop is Vietnam, where authorities will have trouble following this act, writes Adam K. Raymond.

After several days of meetings, Mattis was apparently ready for the show yesterday.

“The snakes! Did you see them tire them out and then grab them? The way they were whipping them around — a snake gets tired very quickly,” the man known as “Mad Dog” told reporters.

‘Mission Impossible’
The press traveling with the retired US Marine Corps general was only expecting a hostage rescue drill, Reuters reports, but the Indonesians delivered much more:

Wearing a hood to blind him, one knife-wielding Indonesian soldier slashed away at a cucumber sticking out of his colleague’s mouth, coming just inches from striking his nose with the long blade. …

At the end of the demonstration, to the tune of the movie “Mission Impossible,” the Indonesian forces carried out a hostage rescue operation, deploying stealthily from helicopters – with police dogs. The dogs intercepted the gunman.

“Even the dogs coming out of those helicopters knew what to do,” Mattis said after the show.