Former Prime Minister, Jim Anderton, NZOM.[/caption] Former New Zealand deputy Prime Minister and leader of the Alliance, New Labour, and the Progressive Party, Jim Anderton died at around 8am on January 7 at Nazareth House, a rest home and hospice in Sydenham Christchurch. Jim Anderton had been ill for much of 2017 and was receiving palliative care. He was born on 21 January 1938 in Auckland. He began work as a teacher, then as a child welfare officer, a secretary for the Catholic diocese in Auckland, then moved into business as an export manager, and established his company Anderton Holdings Ltd. He was elected as a Manukau City councillor in 1965, was beaten by 7000 votes when he challenged Dove Meyer Robinson for the Auckland mayoralty in 1974. In 1977, Jim Anderton began his move toward enduring significance within the Labour Party. He became Labour Party president in 1979. In 1984, he campaigned, won, and became a Member of Parliament for Sydenham in Christchurch. He became Labour’s most outspoken critic of the economic agenda of former Labour finance minister Roger Douglas and those ardent engineers of New Zealand’s radical economic neoliberal dogma. In 1989 he was suspended from the Labour Party caucus after he refused to vote in favour of selling the Bank of New Zealand. He soon resigned from the party and formed New Labour, campaigned in the 1990 General Election and was reelected as the MP for Sydenham under the New Labour party’s policies of full employment, no state asset sales, and an interventionist economic platform. In 1991, the Alliance was formed around the New Labour party pulling together a cluster of small political parties that had no real show of parliamentary representation under the First Passed the Post electoral system. He became leader of the Alliance in 1993, stood down briefly in 1994, returned as its leader in 1995, and won 13 seats in the new Mixed Member Proportional Representation (MMP) elected Parliament in 1996. In 1999, Labour and the Alliance agreed to form a coalition government led by the new Prime Minister Helen Clark. Jim Anderton became deputy Prime Minister. While in Government, Jim Anderton conceived and established Kiwibank. Perhaps it was his way of correcting the state sell off of the BNZ back in 1989 – a government decision that he did not support and one that had threatened political isolation and estrangement. In the New Zealand Herald, former Prime Minister Helen Clark said she was sceptical over Kiwibank, but admits she was wrong: “I was one of the sceptics. How do we know anyone will use this bank? But it was [a] very important part of Jim’s policy platform, and the truth was that the major banks had more or less exited so many smaller communities and suburbs. But there was still a post office, so putting Kiwibank into those facilities was a winner. “It did incredibly well. I was wrong and he was right on that one,” Helen Clark said. The coalition became unstable near the end of the three year term, largely due to New Zealand’s involvement in the US-led war on terrorism and the bombing of Afghanistan. The instability was driven by the Alliance’s party administrative element. Anderton, Matt Robson (the Alliance’s deputy leader, and Minister of Corrections and Associate Minister for Foreign Affairs in the 1999-2002 Clark Government) formed the Progressive Party, campaigned in the 2002 General Election and were reelected to Parliament. Anderton became Minister for Regional Development in the 2002-05 term. In 2005, Anderton was reelected as the sole Progressive MP and was sworn in as minister for a host of portfolios, including: Agriculture, Biosecurity, Fisheries, Forestry, Public Trust, Associate Minister of Health, and Associate Minister for Tertiary Education. He was reelected in 2008 and remained in coalition with Labour in opposition. In 2010 Jim Anderton campaigned for the Christchurch mayoralty but was unsuccessful in his bid. He retired from Parliament in 2011. https://youtu.be/ZXXG0jbuJCA https://youtu.be/_MbDxeFbQuM In the 2017 Queens Birthday Honours, Jim Anderton was awarded the New Zealand Order of Merit for his services to Parliament.

Matt Robson – image by Scoop.co.nz.[/caption]A close political ally and friend of Jim Anderton was Matt Robson. In the New Zealand Herald he reflected on their shared social justice ideals: “They will remember him as someone who recognised a gigantic wrong in the question of wealth distribution in New Zealand, and took action.” “The question of income inequality, and the lack of intention to remedy that, that was central to his politics and he went after that goal – and in many ways achieved, or at least remedied action by the Government,” Matt Robson said. To define Jim Anderton’s contribution, for EveningReport.nz, on reflection, Matt Robson quoted Col Rainsborough’s delivery at the 1647 Putney Debates: “‘I think that the poorest he that is in England hath a life to live as the richest he.‘,” Matt Robson cited. “These sentiments guided the political work of Jim Anderton for over a half-century,” Matt Robson said. “And in formulating and fighting for policies for the ‘poorest he and she’ Jim would always pose the question when political choices had to be made: ‘Is it the right thing to do?’ If the answer was yes then Jim’s response was: ‘Well do it!'” He said this philosophy was clear when Jim Anderton opposed Rogernomics – the roll-out of New Zealand’s neoliberal economic reforms. “When Roger Douglas and his followers proposed implementing the agenda of the [business] Round Table – to significantly lower the taxes of the richest ‘he’ and load the burden onto the poorest ‘he’, and sell public assets at bargain basement prices – Jim had no hessitation in shouting ‘no!’.” By the time the 1980s decade was drawing to a close, Matt Robson said, the rightwing economic power-elites within the Parliamentary Labour Party “scrambled to leave what they saw as the sinking ship of socialism”. Jim Anderton stood against the inevitable tribalism and the economic orthodoxy: “Jim, expelled from Labour, found a warm reception from Labour voters looking for a leader of principle and commitment to the founding ideals of Labour,” Matt Robson said. He added: “Jim’s legacy lies not only in the recognition that he was right to defy the express train of Rogernomics but also that he showed resistance was possible and honourable and the ‘right thing to do’.”
*******
[caption id="attachment_15325" align="alignleft" width="300"]

Prime Minister of New Zealand, Jacinda Ardern.[/caption] On hearing of Jim Anderton’s death, Labour Prime Minister Jacinda Ardern wrote on Twitter: “So sad to hear of the passing of Jim Anderton today. He was a man of huge integrity, strong values and had a genuine passion for people. He dedicated so much of his life to public service and leaves a huge legacy. My thoughts are with his family and friends. RIP, Jim.” On Twitter, former Labour leader and current Minister for Justice, Andrew Little said: “Sorry to hear Jim Anderton has sadly passed away. In my dealings with him as student leader, union leader and newbie MP he was always deeply principled, thoughtful & determined to do the right thing. He happened to be right. Often. RIP Jim.” In a Government issued statement, Prime Minister Ardern said: “New Zealand has lost a man of integrity, compassion and dedication to public service”. “Jim Anderton devoted much of his adult life to public service and to the ideals of the Labour movement. He was first elected to public office in 1965 as a Manukau City Councillor and served local then central government for more than 40 years, including as Deputy Prime Minister between 1999 and 2002. Jim was a leader in his Ministerial work, particularly in the Regional Development and Primary Industries portfolios,” PM Ardern said. She said: “He was a towering figure in the Labour movement for several decades. He will be remembered as someone who stood up for his principles and for the people he represented. His integrity during difficult times marked him out as a true leader. “Jim’s influence as President of the New Zealand Labour Party has lasted for decades. He built a powerful campaigning organisation, selected candidates who became Ministers and Prime Minister and he was an innovative fundraiser. “His work to establish the Alliance and Progressive Parties was both difficult and trailblazing. He never gave up on the values of the Labour movement, and worked tirelessly to bring it back together through the years of the fifth Labour-led Government. “Jim was also a loyal servant of the people of Sydenham and Wigram, serving as an MP from 1984 to 2011. He loved the people of Christchurch and his commitment continued beyond central government politics, including in recent years as Chair of the Stadium Trust and working to save the ChristChurch Cathedral. “There are few figures in New Zealand politics like Jim Anderton. A man of deeply-held values and ideals, he was practical and compassionate. We mourn his loss, and extend our heartfelt sympathies to Jim’s wife Carole, his family and friends,” Prime Minister Jacinda Ardern said.]]> 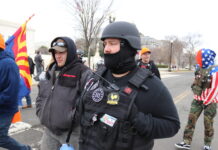 NZ designates American Proud Boys and The Base terrorist groups