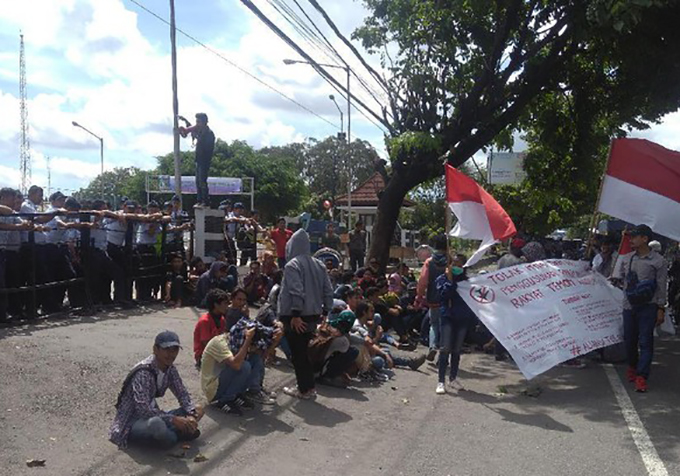 By Ristu Hanafi in Yogyakarta

Protesters and students from Indonesia’s Alliance against the Kulon Progo Airport have again demonstrated in front of the PT Angkasa Pura (API) offices in the Central Java city of Yogyakarta.

The action was marred by scuffles between protesters and security personnel and the blockading of the road in front of API.

The demonstration began at the weekend. The protesters took turns in giving speeches opposing the construction of the New Yogyakarta International Airport (NYIA) in Kulon Progo regency.

Although the demonstration initially proceeded without incident, it was suddenly marred by a scuffle between the protesters and API Yogyakarta security personnel.

As a result, the front gate to the API office was damaged.

The demonstrators then blockaded a length of the road in the direction of Solo-Yogya. Not surprisingly, there was a long traffic jam on the length of road alongside the Adisutjipto International Airport which is located not far from the demonstration.

The demonstrators were still blockading the road and giving speeches in the middle of the street when Detik News published this story.

The blockade is located on the length of road in front of the PT API office on Jl. Raya Solo Km 9. As a result the flow of traffic from the east towards Yogyakarta city was brought to a standstill.

Security personnel from AP I, the police and the TNI (Indonesian military) could be seen guarding the rally.

“We are protesting in solidarity with the residents of Temon sub-district, Kulon Progo, who are being impacted on by the airport project. Reject the NYIA project and stop the forced eviction of Kulon Progo residents”, said action coordinator. (sip/sip)