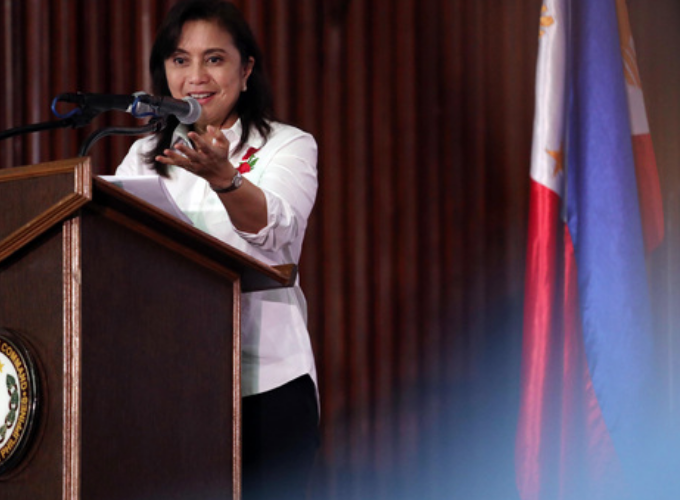 Philippine Vice-President Leni Robredo wants Filipinos to stand up to human rights violations being done to them. Image: OVP File

By Mara Cepeda in Manila

On the eve of Human Rights Day, Philippine Vice-President Leni Robredo called on Filipinos to stand up against all forms of human rights abuses, including extrajudicial killings in the war on drugs, and the oppression of free speech by online trolls.

This was the message of the former human rights lawyer for Human Rights Day, celebrated worldwide today.

(Human Rights day this year is not only a time to remember our contributions to this fight. We should commemorate this day because of the disturbing news on the widespread human rights violations that are happening now, especially against people who are on the fringes of society.)

The Vice-President said Filipinos have experienced cases of human rights abuses in the past year.

(We are being challenged by the times to strengthen our fight to uphold human rights, in the face of everything Filipinos experienced in the past year. These include extrajudicial killings, oppression of free speech even on social media, and poverty that continues to cripple millions of our countrymen.)

Robredo is a staunch critic of President Rodrigo Duterte’s bloody war on drugs, where thousands of drug suspects have been killed in legitimate police operations and vigilante-style killings nationwide.

The Vice-President is also against the tactics of online trolls, who use social media to swarm on critics of the President. Robredo herself has been a longtime target of these trolls and government propagandists.

READ MORE: State-sponsored hate: The rise of the pro-Duterte bloggers

She had called fake news spreaders as “unapologetic,” “arrogant,” and an “insult” to other government officials who do their job well.

Standing up to a ‘bully’
Human rights groups echoed Robredo’s message. The In Defence of Human Rights and Dignity Movement (iDEFEND) and the Philippine Alliance of Human Rights Advocates (PAHRA) condemned “in the strongest terms” the Duterte administration’s “anti-human rights policies and actions”.

The two human rights groups hit the drug war and Duterte’s declaration of the Communist Party of the Philippines-New People’s Army as “terrorists”.

They also said the killings of activist priest Marcelito Paez of the Rural Missionary in Nueva Ecija and Datu Victor Danyan of South Cotabato “creates a chilling effect that no one is safe and that anyone who gets in his way will be silenced.

“The President’s utter disrespect towards democracy and rule of law is showing no pretense to exhibit his authoritarian streak by denying the voices of dissent. His government is destroying the generations of progress on the respect and protection of human rights in the guise of war on drugs and terror,” said iDEFEND and PAHRA in a statement.

The human rights groups said they hold the Duterte administration accountable “for the systematic violence against human rights defenders.

“But we all know that a person obsessed with power will never listen. Often the bully takes pleasure in seeing a victim’s fear. The only way to stop a tyrant is by standing up firmly together. The only thing necessary for the triumph of tyranny is for us to do nothing,” they said.

Newly formed group Artikulo Trese even held a fun run and a symposium on extrajudicial killings on Saturday.

“We are people of God –a caring and loving society; shepherds who should take care of our flock, not slaughter them or feed them to the wolves,” said Artikulo Trese convenor Bishop Deogracias Iñiquez.

“Everyone deserves due process, even the most ruthless of criminals,” he added.

Climate change and human rights
Senator Loren Legarda, meanwhile, said it was also important for the Philippines to pursue climate justice internationally because Filipinos’ human rights are curtailed by the negative effects of climate change.

Legarda, chairperson of the Senate committee on climate change, said in her Human Rights Day message that the Philippines must strengthen its demand for the full implementation of the Paris Agreement by 2020.

“We always need to contextualise the discussion on climate change with the issue of human rights. We cannot truly address climate change if we do not recognize the fact that climate change impinges on our very basic human rights, such as access to food, water, shelter, livelihood, and the right to life itself,” said Legarda.

“Compared to industrialised countries, the Philippines barely contributes to global warming, and yet we bear its brunt.

“Every year, millions of families get displaced, thousands of lives and livelihoods are lost, and billions worth of agriculture and infrastructure are damaged because of climate change. It is time that we seek justice for these tragedies,” she added.