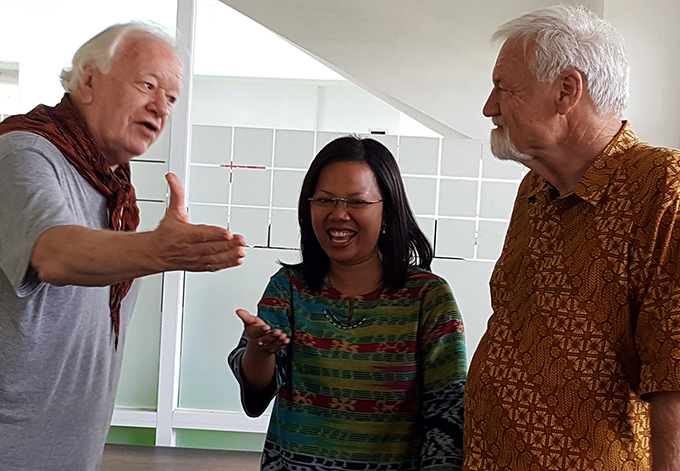 The academic world is supposed to be a bright-lit landscape of independent research pushing back the frontiers of knowledge to benefit humanity.

Years of fingernail-flicking test tubes have paid off by finding the elixir of life. Now comes the hard stuff: telling the world through a respected international journal staffed by sceptics.

After drafting and deleting, adding and revising, the precious discovery has to undergo the ritual of peer-reviews. Only then may your wisdom arouse gasps of envy and nods of respect in the world’s labs and lecture theatres.

The goal is to score hits on the international SCOPUS database (69 million records, 36,000 titles – and rising as you read) of peer-reviewed journals. If the paper is much cited, the author’s CV and job prospects should glow.

SCOPUS is run by Dutch publisher Elsevier for profit.

It’s a tough track up the academic mountain; surely there are easier paths paved by publishers keen to help?

‘Careful checking’
“These journals say: ‘Give us your money and we’ll publish your paper’,” says Professor David Robie of New Zealand’s Auckland University of Technology. “They’ve eroded the trust and credibility of the established journals. Although easily picked by careful checking, new academics should still be wary.”

Shams have been exposed by getting journals to print gobbledygook papers by fictitious authors. One famous sting reported by Nature had a Dr Anna O Szust being offered journal space if she paid. “Oszust” is Polish for “a fraud”.

Dr Robie heads AUT’s Pacific Media Centre, which publishes the Pacific Journalism Review, now in its 23rd year. During November he was at Gadjah Mada University (UGM) in Yogyakarta, Central Java, helping his Indonesian colleagues boost their skills and lift their university’s reputation.

The quality of Indonesian learning at all levels is embarrassingly poor for a nation of 260 million spending 20 percent of its budget on education.

The international ranking systems are a dog’s breakfast, but only UGM, the University of Indonesia and the Bandung Institute of Technology just make the tail end of the Times Higher Education world’s top 1000.

There are around 3500 “universities” in Indonesia; most are private. UGM is public.

UGM has been trying to better itself by sending staff to Auckland, New Zealand, and Munich, Germany, to look at vocational education and master new teaching strategies.

Investigative journalism
Dr Robie was invited to Yogyakarta through the World Class Professor (WCP) programme, an Indonesian government initiative to raise standards by learning from the best.

During a break at UGM he told Strategic Review that open access – meaning no charges made to authors and readers – was a tool to break the user-pays model.

AUT is one of several universities to start bucking the international trend to corral knowledge and muster millions. The big publishers reportedly make up to 40 percent profit – much of it from library subscriptions.

According to a report by AUT digital librarians Luqman Hayes and Shari Hearne, there are now more than 100,000 scholarly journals in the world put out by 3000 publishers; the number is rocketing so fast library budgets have been swept away in the slipstream.

In 2016, Hayes and his colleagues established Tuwhera (Māori for “be open”) to help graduates and academics liberate their work by hosting accredited and refereed journals at no cost.

The service includes training on editing, presentation and creating websites, which look modern and appealing. Tuwhera is now being offered to UGM – but Indonesian universities have to lift their game.

Language an issue
The issue is language and it’s a problem, according to Dr Vissia Ita Yulianto, researcher at UGM’s Southeast Asian Social Studies Centre (CESASS) and a co-editor of IKAT research journal. Educated in Germany she has been working with Dr Robie to develop journals and ensure they are top quality.

“We have very intelligent scholars in Indonesia but they may not be able to always meet the presentation levels required,” she said.

“In the future I hope we’ll be able to publish in Indonesian; I wish it wasn’t so, but right now we ask for papers in English.”

Bahasa Indonesia, originally trade Malay, is the official language. It was introduced to unify the archipelagic nation with more than 300 indigenous tongues. Outside Indonesia and Malaysia it is rarely heard.

English is widely taught, although not always well. Adrian Vickers, professor of Southeast Asian Studies at Sydney University, has written that “the low standard of English remains one of the biggest barriers against Indonesia being internationally competitive.

“… in academia, few lecturers, let alone students, can communicate effectively in English, meaning that writing of books and journal articles for international audiences is almost impossible.”

Though the commercial publishers still dominate there are now almost 10,000 open-access peer-reviewed journals on the internet.

“Tuwhera has enhanced global access to specialist research in ways that could not previously have happened,” says Dr Robie. “We can also learn much from Indonesia and one of the best ways is through exchange programmes.”

This article was first published in Strategic Direction and is republished with the author Duncan Graham’s permission. Graham blogs at indonesianow.blogspot.co.nz