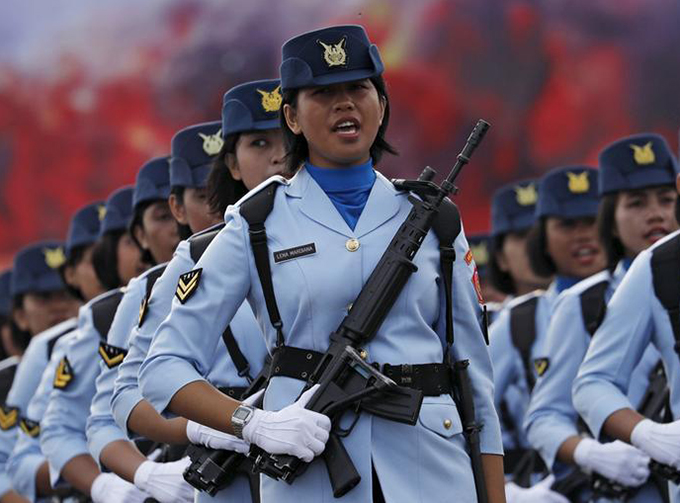 By ending the practice, the Indonesian government would be abiding by its international human rights obligations and honouring the goals of the International Day for the Elimination of Violence against Women on Saturday – November 25.

Senior military and police officers with knowledge of the “virginity testing” policy told Human Rights Watch that the security forces continue to impose these cruel and discriminatory “tests,” which are officially classified as “psychological” examinations, for “mental health and morality reasons.”

“These tests are degrading and discriminatory, and they harm women’s equal access to important job opportunities.”

Virginity testing is a form of gender-based violence and is a widely discredited practice.

In November 2014, the World Health Organisation issued guidelines that stated, “There is no place for virginity (or ‘two-finger’) testing; it has no scientific validity.”

Testing exposed
Human Rights Watch first exposed the use of “virginity tests” by Indonesian security forces in 2014, but since then the government has failed to take the necessary steps to prohibit the practice.

An Indonesian military doctor told Human Rights Watch that senior military personnel were well-aware of the arguments against “virginity tests,” but were unwilling to abolish them.

The doctor suggested that stopping the tests required the direct and explicit intervention of Indonesian Armed Forces commander General Gatot Nurmantyo to order an end to the practice.

“The military is a top-down organisation. We have to follow orders.”

Jokowi should declare an immediate prohibition of “virginity tests” by the military and police and create an independent monitoring mechanism to ensure that security forces comply.

The testing includes the invasive “two-finger test” to determine whether female applicants’ hymens are intact, findings that are scientifically baseless.

While Human Rights Watch found that applicants who were deemed to have “failed” were not necessarily penalised, all of the women with whom we spoke with described the test as painful, embarrassing, and traumatic.

‘Two-finger test’
Several Indonesian military and police officers told Human Rights Watch that both security forces have also sought to justify the “two-finger test” as means of determining if applicants are pregnant.

All branches of the Indonesian military – air force, army, and navy – have used “virginity tests” for decades and, in certain circumstances, also extended the requirement to the fiancées of military officers.

In May 2015, then-commander of Indonesia’s armed forces, General Moeldoko, responded to criticism of “virginity tests,” by saying to the media, “So what’s the problem? It’s a good thing, so why criticise it?”

“If they are no longer virgins, if they are naughty, it means their mentality is not good,” Basya told The Guardian.

“Virginity tests” have been recognised internationally as a violation of human rights, particularly the prohibition against “cruel, inhuman or degrading treatment” under article 7 of the International Covenant on Civil and Political Rights (ICCPR) and article 16 of the Convention against Torture, both of which Indonesia has ratified.

The United Nations Human Rights Committee, the international expert body that monitors compliance with the ICCPR, states in a General Comment that the aim of article 7 is “to protect both the dignity and the physical and mental integrity of the individual.”

Coerced virginity testing compromises the dignity of women and violates their physical and mental integrity.

Because men are not subjected to virginity testing, the practice constitutes discrimination against women as it has the effect or purpose of denying women on a basis of equality with men the ability to work as police officers.

“Indonesian women who seek to serve their country by joining the security forces shouldn’t have to subject themselves to an abusive and discriminatory ‘virginity test’ to do so,” Varia said.

“The Indonesian police and military cannot effectively protect all Indonesians, women and men, so long as a mindset of discrimination permeates their ranks.”