Crucial to how Indonesia’s news outlets cover the environment – and its destruction – is the ownership and vested interests of the media landscape.  Video: Al Jazeera

ANALYSIS: By David Robie in Yogyakarta

In May, President Joko “Jokowi” Widodo of Indonesia raised eyebrows across the archipelago when he inspected the Trans-Papua highway while trail blazing with a motorbike.

Tempo magazine, Indonesia’s most authoritative news magazine, remarked that he did this while “wearing only a thick jacket without a bullet proof vest”. Mentioning this lack of a flack jacket was tacit acknowledgement of the uncertain situation given an exponential rise of pro-independence sentiment in Indonesia’s two most eastern-most provinces of Papua and West Papua.

But Jokowi’s unconventional style of launching infrastructure projects didn’t just end there. Earlier this month he cruised along in a four-wheel drive vehicle on the recently completed Becakayu toll road, which had been languishing uncompleted for 18 years until his presidency gave the project a hurry up.

Last month, while giving a speech at Diponegoro University’s 60th Dies Natalis in Semarang, Central Java, Jokowi declared that infrastructure development was vitally important for the future in Indonesia. He wanted the country to become more competitive than its neighbours, such as Malaysia and Singapore. 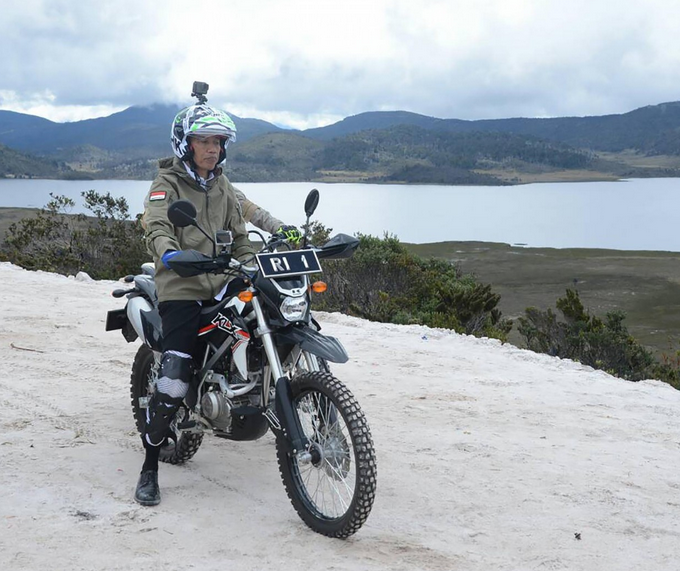 President Jokowi Widodo checking out progress on the Trans-Papua Highway in May. Image: Repub of Indonesia

“Why is our infrastructure being built?,” he asked rhetorically about the rapid pace and emphasis that he and Vice-President Jusuf Kalla have given the strategy – a marked contrast with other presidencies.

“The answer is that we want our competiveness to be better than other countries. Our global competiveness must be improved,” he said. “This year is pretty good as we have soared from 41st to 36th among 137 countries.” 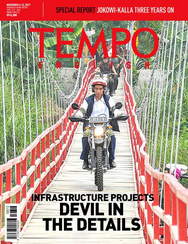 The latest edition of Tempo magazine has devoted 38 pages to its cover story on infrastructure projects, headlining the fairly comprehensive report “Devil in the details”.

Few environmental reports
But absent from the range of quality articles was any serious report on the state of the environment in Indonesia — or environmental journalism, given that 2000 of the country’s 17,000 islands and 42 million households in a population of 261 million are at risk of “drowning” by 2050, according to a Listening Post report on Al Jazeera last month.

As Al Jazeera reported, “when you look at the [Indonesian] mainstream media, it is hard to find stories that go beyond catastrophes like forest fires or mudslides, examining who and what is behind them.”

A leading environmental journalism advocate has blamed lack of climate change and environmental reporting skills in Indonesian newsrooms for the lack of coverage.

“It is easier for journalists to cover sports or the economy, because they have scores and numbers,” Harry Surjadi, head of the Indonesian Society of Environmental Journalists, told Listening Post. “Those stories are much easier to write than environmental stories, where journalists have to understand biology, ecology, waste and chemistry.”

Nevertheless, Jokowi was praised by The Jakarta Post in a recent editorial for both his development policies and his concern for the poor of the country with his popularity  climbing.

“His overwhelming attention to the basic needs of the people has made him rather obsessive with the objective of keeping the prices of food and other basic necessities stable, thereby keeping inflation below 4 percent,” the Post noted.

However, in its special development edition, Tempo said in an editorial that the Widodo administration was “racing against time” after three years in government to complete its raft of planned infrastructure projects costing an estimated RP4,197 trillion (NZ$415 billion) between 2014 and 2019.

Many ambitious projects with an emphasis on developing the regions, especially eastern Indonesia — including Papua, are being worked on at the same time.

In his Semarang speech, Jokowi said: “Why must we build? Because our country is an archipelago state, the marine foundation base is a must. Airport development was equally important as many islands could not be serviced by ship.

Tempo seemed to agree with this view by stating in its editorial: “In order to reach a healthy and growing economy, Indonesia needs new roads, bridges, power stations, airports and ports. This in turn requires massive funding.”

Some 42 percent of the required funding — the budget from the 2017 year has been almost tripled from RP177 trillion in Jokowi’s first year in office in 2014 to RP 4011 trillion this year — depends on allocations from the state budget, the magazine noted, plus money from state-owned businesses and private partnerships.

Tempo praised Jokowi for cutting back on energy subsidies, saying this was the right move to make – especially over fuel costs.

Sounding a warning
While also complimenting Jokowi on the boost for several jumbo projects that had stalled in recent years to ensure they get completed, Tempo also sounded a warning.

“Jokowi is racing against time. Infrastructure construction generally takes a while, and its economic benefits are only felt three to five years after construction begins: a time span which does not align with our five-year political cycle,” the magazine said.

“The government should avoid giving the impression that it is impatient to reap its rewards from the projects, especially once the cycle of political succession comes around. Good governance must not be abused for the sake of earning points for the next general elections [in 2019].” 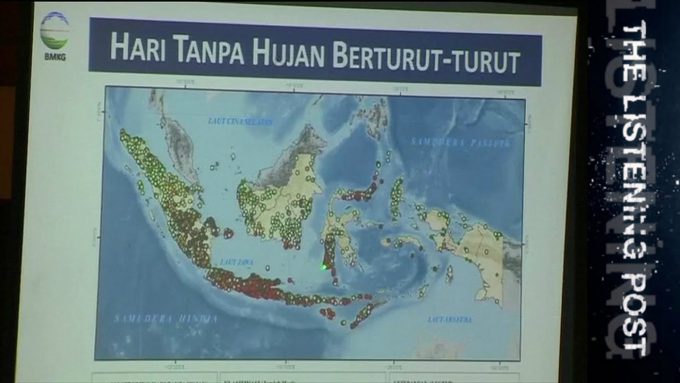 Infrastructure development in Indonesia is a “matter of equality and justice” across the nation, says President Widodo. Image: Al Jazeera

Maluku and Papua: RP444 trillion (13 projects, including development of the Tangguh Train 3 LNG plant and the Palapa ring broadband).

The Jakarta MRT … among the infrastructure projects. Image: Repub of Indonesia

According to a breakdown chart published by Tempo, partnerships with private companies would provide more than half the projected budget – 57.5 percent, with SOEs providing 30 percent and the balance of 12.5 percent from the state budget.

In a four-page interview with the magazine, Jokowi said that after touring across the country, from Sabang to Merauke, “I saw for myself how grave the inequality was”, and he was convinced that an expanded infrastructure would help reduce the gap.

“This is a matter of equality and justice. Besides, our infrastructure development has lagged far behind our neighbours,” he said.

“Infrastructure is a foundation for tackling the problem of inequality. If we want it easy, we just have to allocate the budget for subsidies and increased social assistance, so purchasing power will increase and the public is happy.

“But do we want to continue this kind of strategy? I took the risk by not resorting to this kind of political move, and instead diverted resources to infrastructure development.”

Yet surprisingly nothing in this otherwise comprehensive report addressed climate change and environmental issues, a critical component of sustainable development in Indonesia. 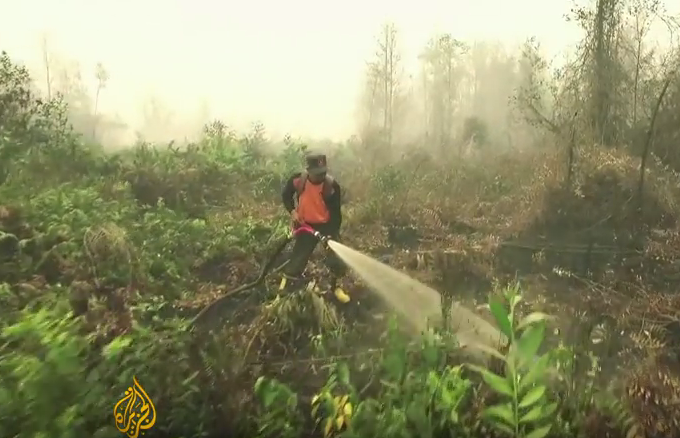 Devastating forest fires in Indonesia in 2015 were caused by a massive burn-off for palm oil plantations. Image: Al Jazeera

“The fires produced – in just three weeks – more greenhouse gases than Germany does in an entire year,” Listening Post said.

“Forest fires have become an annual occurrence in Indonesia, and still, the country’s media seldom devote the column centimetres and airtime needed to explore the causes behind them.”

Merah Ismail, campaign manager for the mining advocacy network JATAM, was quoted as saying: “When [the media] do cover forest fires or the effects of mining, they leave out “subjects like ‘water poisoned due to toxic waste or air pollution’ because they don’t know enough about those subjects”.

While Jokowi had announced in September 2015 that Indonesia would cut the growth of greenhouse gas emissions by 29 percent by 2030, the nation’s news media have reported little on the progress, or lack of it, over this pledge — even with global debate on climate change at COP23 ongoing in Bonn this month.

With little media exposure or debate, the issue of the future of the rainforests has been framed as a tough choice – between the economy and the environment.