Tech Investigation by Carolyn Skelton. I have been enjoying my exploration of the Ubuntu version of the Linux Operating System (OS). It’s an active form of computing that requires a little more effort than using Microsoft’s Windows. Microsoft and the devices that use its systems, are very good at providing what looks like a wide range of choice, between the latest newest shiny things. But, in practice, the choices are limited. And increasingly, as with Windows 10, they aim for planned obsolescence, encouraging dependency on their OS. The result is we keep having to pay them more money to keep up-to-date, or to get add-ons. In my last post I argued for more teaching of computer coding in primary schools. Coding teaches a deeper understanding and transferable skills. Basically, a lot of current teaching is getting children excited about using the latest shiny things, without learning many new, or deep-seated skills: ones that could be easily transferred to new IT developments. Newer is not always better, as learned by young people who have ever had the pleasure of making their own toys and equipment (like trolleys) or who have learned to maintain and repair their old cars, motorbikes, or bicycles. There were new Ubuntu terms to use, such as “Dash” the name for the dashboard at the top of the launch bar on the left. I can search for folders, files and software from there. Further down the launch bar is the “Software Center” where I can search for some software to install from Ubuntu or its partners. All this can be done through mouse movements and clicks. A lot of the software available is free, but some cost money. A little bit of self-help is far more satisfying than being totally at the mercy of Microsoft. In the process I have learned things about the current state of computing software, and a few basic security rules. Now I want to learn more.

Setting up Ubuntu on a reconditioned laptop I got a start with using Ubuntu with an Intel Compute Stick, pre-loaded with Ubuntu. I enjoyed using it, but found it inadequate. I was (unnecessarily as it turned out) nervous about adding Ubuntu to a computer. I found a local computing business that advertised they would load Linux distros (versions of its OS) onto computers for $120.00. I was tempted, but chose to do it myself. I was told that many people buy a second-hand (off-lease), reconditioned computers, and load a Linux distro OS onto it . It is recommended that buyers of such computers go for A Grade ones with a limited warranty period, and from a reputable company. These are the ones most likely to have been well-looked after. I looked through some lists of laptop models that are known to work well with various Linux distros. I chose one with a reasonable amount of disc space on the hard drive, and that was available at an Auckland store. It cost just under $500.00 with a 3 month warranty. Loading Ubuntu as the second OS turned out to be pretty easy. I followed online instructions to load Ubuntu onto my reconditioned laptop. Things didn’t happen exactly as described. I did not attempt the suggestion to create a partition between Windows and the space to be used for Ubuntu. First I downloaded an an ISO file onto a DVD. The instructions said to then reboot the computer with the disc in the laptop. I tried rebooting several files but…. nothing. I had stupidly failed to tick the verify box, which would have resulted in a check to see if the iso file had downloaded properly. So I went to the DVD and clicked on the downloaded file … and THEN, suddenly things started to happen and I was away! Files began being extracted to my laptop, and then a pop up box invited me to reboot – I clicked on the “Boot” option. When the laptop restarted, a trial version of the Ubuntu desktop loaded. If I had stayed with that, it would have required to reboot in future from the disc. I was already committed to loading Ubuntu, so I clicked on the “Install” folder, sitting enticingly at the top of the desktop. Then I was taken through the set up process. As I did not have any files on my Windows OS that I wanted to keep, I followed a recommendation on Ask Ubuntu to use a slider. I slid the slider so that more of the hard disc space was for Ubuntu than Windows. The Ubuntu OS was then set up. Each time I log on, the rolling text stops with Ubuntu highlighted at the top. If I hit “Enter” or just wait, Ubuntu loads. If I arrow down to Windows OS _1 and click on that, Ubuntu boots up from Windows. If I arrow down to Windows_2, the Windows OS opens. All pretty easy. After my earlier post on difficulties with playing videos on, Ubuntu, Tim O’Brien tweeted me a very useful link to 10 things that can be done to tweak or improve Ubuntu 14.04. David H recommended using the html5 option for youtube videos. [caption id="attachment_7324" align="alignleft" width="300"]

Image from linuxpitstop.com[/caption] I was nervous about typing in commands – it looked pretty scary. My first attempt was in response to TV One and TV3 videos ondemand not playing. It was recommended to install hal – which sounded to me like entering an alternative 2001 Space Odyssey universe. To do this I need to open a terminal. This can be done through searching for it on the dash. I prefer typing cntrl+Alt+T. That brings up a little box. When it prints my logon ID and stops, it is waiting for me to type in a command. If I have typed it correctly, when I hit enter text/code starts printing down the box. If there are no more commands for me to add, I type “Exit” and the box closes. Featured image from Canonical
]]> 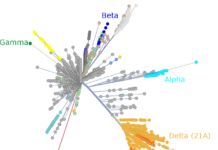 Australia is heading for its third Omicron wave. Here’s what to expect from BA.4 and BA.5