Canadian officials have confirmed rumours that the trade ministers from the twelve countries negotiating the Trans-Pacific Partnership Agreement (TPPA) plan to meet in Atlanta, US at the end of the month in a last ditch attempt to conclude the deal. The chief negotiators are set to meet on 26 September to try to clear the ground for the politicians.

The ministers’ meeting coincides with the UN Sustainable Development Summit when their political leaders will be together in New York, giving US President Obama the perfect opportunity to pressure John Key and the others to accept US demands, according to Auckland University law professor Jane Kelsey.

Of the three big outstanding issues – market access on automobiles and dairy and longer monopoly protections biologic medicines – autos is the only one where there have been public moves to settle the differences.

Mexico and Canada object to a deal on autos reached by the US and Japan. The four said progress was made at a meeting this week and will meet again early next week in the US.

‘Whether the Atlanta ministerial would proceed without agreement on autos remains to be seen’ Professor Kelsey said. ‘Another failed ministerial would doom the negotiations. But they are between a rock and a hard place, as the controversial deal is now hostage to the US presidential election cycle and this is really their last chance to conclude it under Obama’.

The market access issues are especially sensitive for Canada, which has an election in a month from now, but the details of the deal would not be released until after that date.

‘In contrast to autos, there has been no noise about dairy at all,’ Kelsey said. ‘This lends support to the view expressed to me by informed people in other countries that autos is the bigissue and once that is settled dairy is not expected to delay a final agreement.’

‘Put another way, Groser is expected to swallow the rat, rather than hold up the deal, and wear the flack at home by saying New Zealand couldn’t afford not to be part of the TPPA. The details of the final deal won’t be available for another 30 days so he can talk up the benefits without any facts to get in the way.’

* Professor Kelsey called on Minister Groser to ‘abandon his carefully ambiguous language and set out some real bottom lines on pharmaceuticals, investment, state-owned enterprises, and dairy so New Zealanders know where he stands before the secret deal-making resumes in Atlanta.’

* New Zealand officials have confirmed inevidence to the Waitangi Tribunal that no substantive changes can be made after the negotiations are concluded. The US Fast Track law then drives the timetable. The President must give 90 days notice before signing the TPPA and the text must be made available 30 days after that – but too late to change anything in the text.

Trade Minister, Tim Groser.[/caption] On August 1, Trade Minister Tim Groser wrote that he was disappointed that the TPP negotiations were unable to reach a conclusion. He added however that TPP ministers “collectively pledged to meet again as soon as possible to finalise the deal”. Groser said good progress was made in the July/August negotiations “but a number of challenging issues remain, including intellectual property and market access for dairy products”. “We will continue to work toward a successful conclusion. This is about getting the best possible deal for New Zealand, not a deal at any cost. “I am confident that we will reach an agreement that is in the best interests of New Zealand when negotiations resume,” Tim Groser said. On August 21, Groser traveled to Malaysia to take part in meetings involving Asia and BRIC nations counterweight to the TPP –  the Regional Comprehensive Economic Partnership (RCEP). The RCEP meetings were held alongside the the annual East Asia Summit Economic Ministers’ Meeting, and ASEAN Economic Ministers’ consultations with New Zealand and Australia. At the time Groser wrote: “The Kuala Lumpur meetings are an important point of engagement for New Zealand with ASEAN and the wider Asian region.” He added: “The RCEP meeting will review the overall state of the negotiation and its forward path. We also look forward to confirmation of an agreement on the structure for initial market access offers on goods.” The Government detailed how East Asia has more than 3 billion people and there is increasing regional economic integration:

RCEP countries include 7 of our top 10 trading partners who took nearly $30 billion of our exports in 2014. Helping New Zealand businesses gain greater access to that massive customer base will provide significant benefits to our economy.

Celebrations to commemorate the 40th anniversary of dialogue relations between New Zealand and ASEAN. This includes events to showcase the New Zealand-ASEAN relationship, such as a NZ-ASEAN awards event, NZ-ASEAN Business Council meetings and an alumni forum for the ASEAN-New Zealand Young Business Leaders’ Initiative. 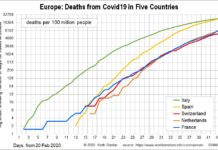 Young people are anxious about coronavirus. Political leaders need to talk with them, not at them